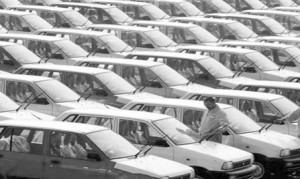 The numbers game in the automotive arena is quite a frugal attempt to display prowess of the cars produced. While the numbers can suggests how well a company is doing in terms of business, whereas the numbers set on a track by said company’s car suggest how better it is in terms of performance over competition and ironically, the numbers of mileage are even better, look where they got Prius to, the world’s third best selling car.

It said the two other components of automotive industry such as jeeps and trucks also showed dismal performance by registering negative growth of 44 percent and 6.8 percent respectively.

In total, Pakistan has produced 110,059 cars during first three quarters of the current year as compared to 100,870 units during the same period last year, showing 9.1 percent growth and still the auto assemblers brag about the predicament economic situation that affect business and consequently, prices.

These are the first pictures of the next Ferrari Enzo