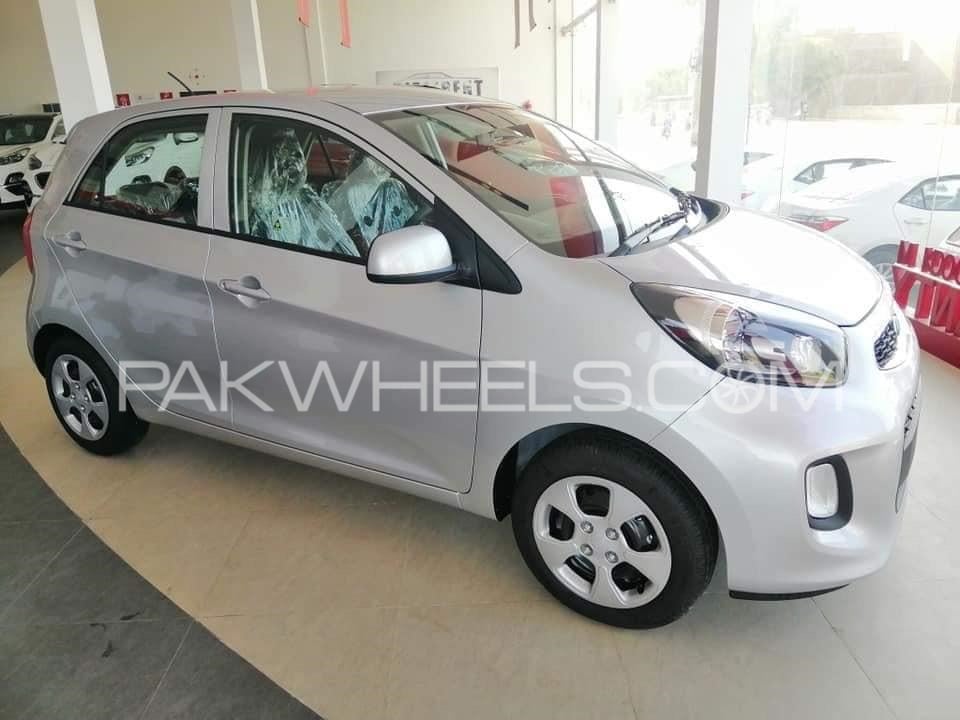 KIA starts bookings for Picanto: Check out the specs & features!

The wait is over as KIA Lucky Motors is all set to start the bookings of its highly anticipated hatchback Picanto from 14th September 2019. 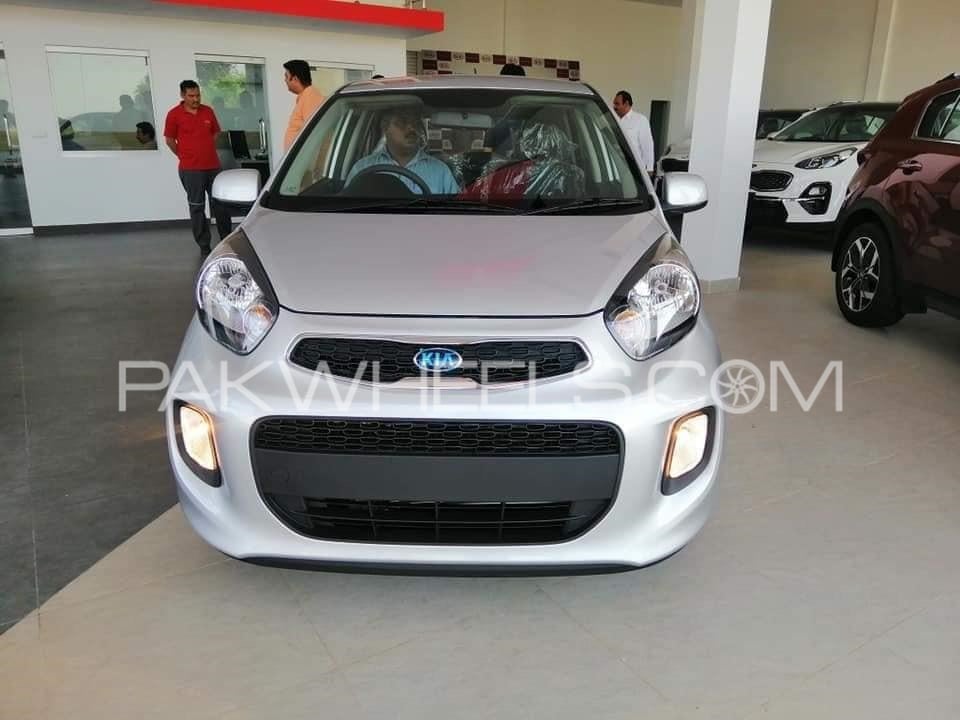 According to the details, the 2nd generation of KIA Picanto will be the first car of the Korean auto manufacturer in the hatchback segment in Pakistan. Previously, the company had launched the high-end cars including Grand Carnival and SUV Sportage. The auto manufacturer is launching the hatchback in two variants, i.e. 1.0L (MT & AT). The bookings of Picanto will commence from 14th September, and the customers can book their car at the prices given below: 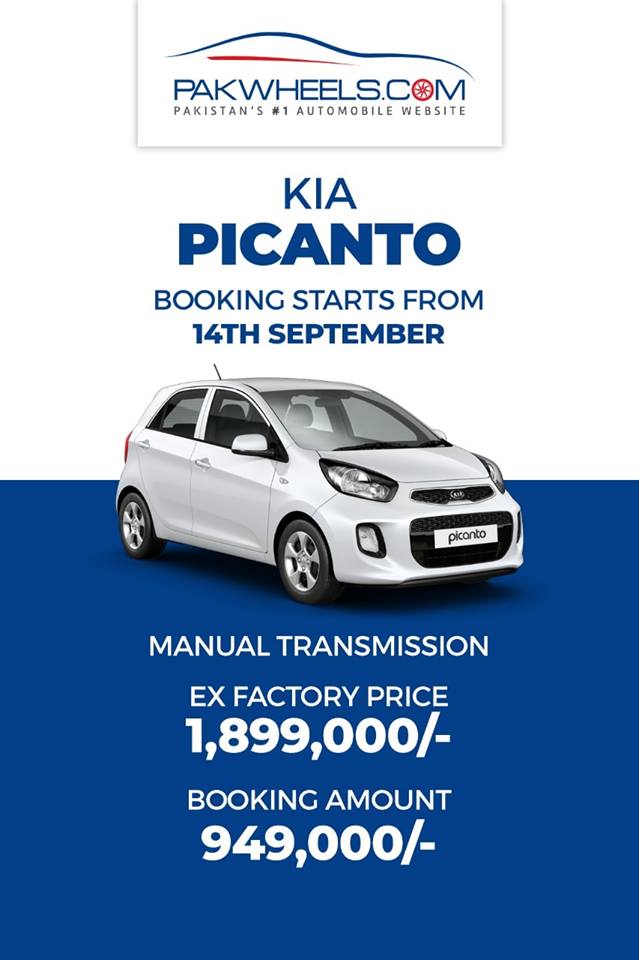 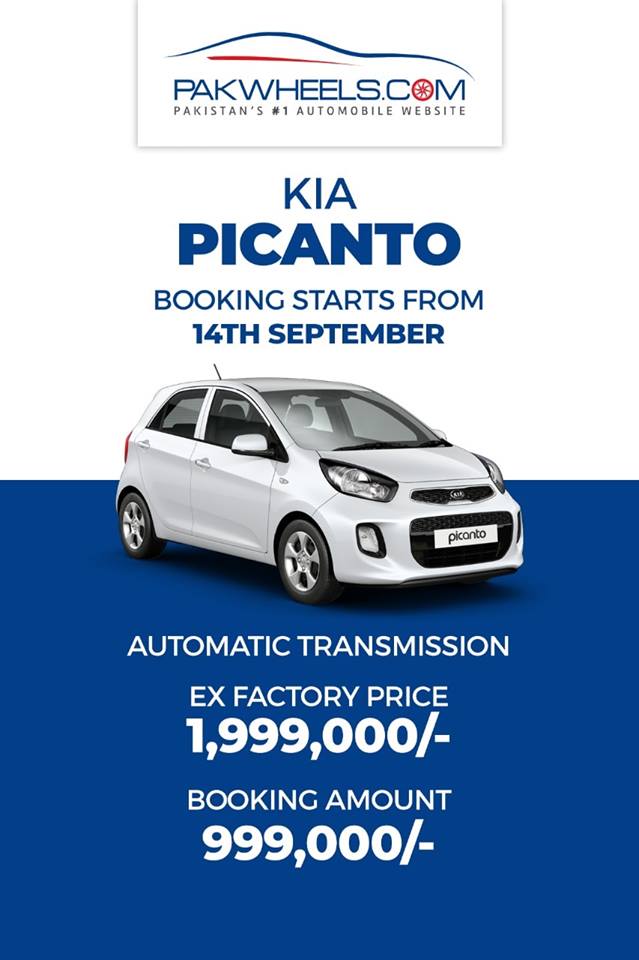 The company is also offering optional accessories in its hatchback, which is an exciting element for the customers. The company is also offering a warranty of 4 years or 100,000 km (whichever comes first) on KIA Picanto. The delivery of KIA Picanto will start from the 3rd week of October 2019. Furthermore, the all-new Picanto will be available in four different colors, including:

There were a lot of speculations regarding its price in Pakistan, and PakWheels previously reported that it would range from Rs.1.8 million to Rs.2.0 million. The company has also revealed its ex-factory price for both variants, which exactly falls in the expected range.

KIA Picanto is well and truly considered as one of the direct rivals of Suzuki Cultus in the local sector of Pakistan. Its entry in the local industry will boost up the competition and offer more choices for the customers to choose from. It’s also one of the major reasons why the customers were anxiously waiting for its launch. It is pertinent to mention here that both the trims of Picanto are equipped with the same standard features, whereas some accessories are optional, which will be discussed later in this story. Also, note here that the company has brought the 2nd generation of Picanto in Pakistan; however, it’s available in the 3rd generation in other countries now. Before taking too long, let’s quickly get you around its specifications and features.

KIA Picanto comes with a 1.0-liter MPI Inline 3-cylinder petrol engine. With an engine capacity of 998 cc, it’s mated with two types of transmissions on offer, i.e. 5-speed manual transmission and 4-speed automatic transmission. It has Euro 2 emissions which also makes it an environmental-friendly vehicle to some extent. The 1.0L engine of Picanto can produce a maximum output power of 69 hp at 6200 rpm and a maximum torque of 94 Nm at 3500 rpm. 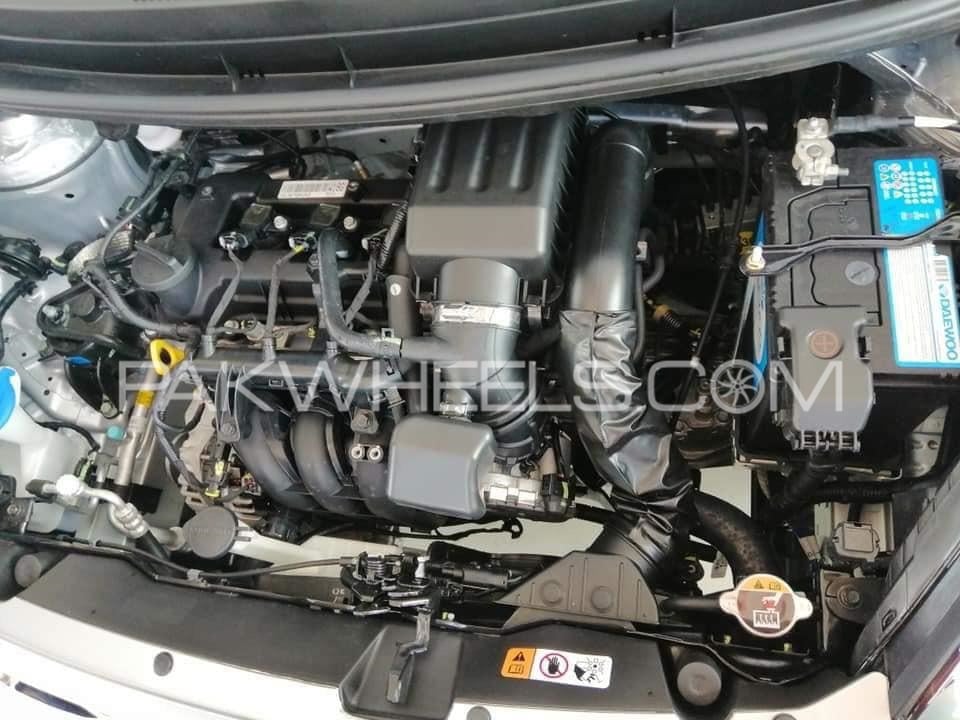 KIA Picanto is quite ideally designed for the roads of Pakistan in terms of length, width, height and ground clearance. The hatchback’s overall length is 3595 mm whereas its width and height are 1595 mm and 1490 mm. It has a significant ground clearance of 152 mm which will be good enough on the roads of Pakistan. The car’s wheelbase is 2385 mm and when coupled with its optimum height, provides good control and stability while driving. The front and rear tread of the car is 1415 mm and 1418 mm. The minimum turning radius of KIA Picanto is 4.8 m which is optimum for maneuvering locally. The gross weight of the car is 1400 kg and offers a seating capacity for five persons. Its fuel tank capacity is 35 liters while it has a luggage space of 200 liters at the rear.

The entry-level hatchback of KIA has 13-inch disc brakes at the front whereas the rear wheels have 7-inch drum brakes. KIA Picanto is equipped with a front suspension of MacPherson Strut with stabilizer. The rear suspension is powered by Torsion Beam Axle. The suspension has shock absorber gas and coil spring which works well in absorbing the impact of bumpy roads on the car.

KIA Lucky Motors has brought the 2nd generation of Picanto in Pakistan. The hatchback resembles Suzuki Cultus in its design language however it has sharper body cuts and signature tiger-nose front radiator grille. It is a combination of black mesh outlined with chrome lining which looks attractive but sleek in shape. Its headlights are quite prominent on the outlook and equipped with multi-focus reflector. The headlamps are also accompanied by a bulb that works as day-time running lights. It has a large black mesh grille opening at the bottom molded in the front bumper which comes as body-colored. The front wipers are powered by 2-speed control. Picanto has quite sharp cuts on its side body, extending all the way to the length of the body which defines its design language. The hatchback is manufactured with strong aerodynamics and looks elegant from the side looks. The outside door handles are body-colored. The exterior side mirrors are also body-colored and heated with a feature of electrical adjustment. The standard tyre size used in Picanto is 165/60 R14 equipped with steel wheel having full-size wheel covers. There is also a spare tyre of the size 105/70 D14 along with steel wheel available in the car. 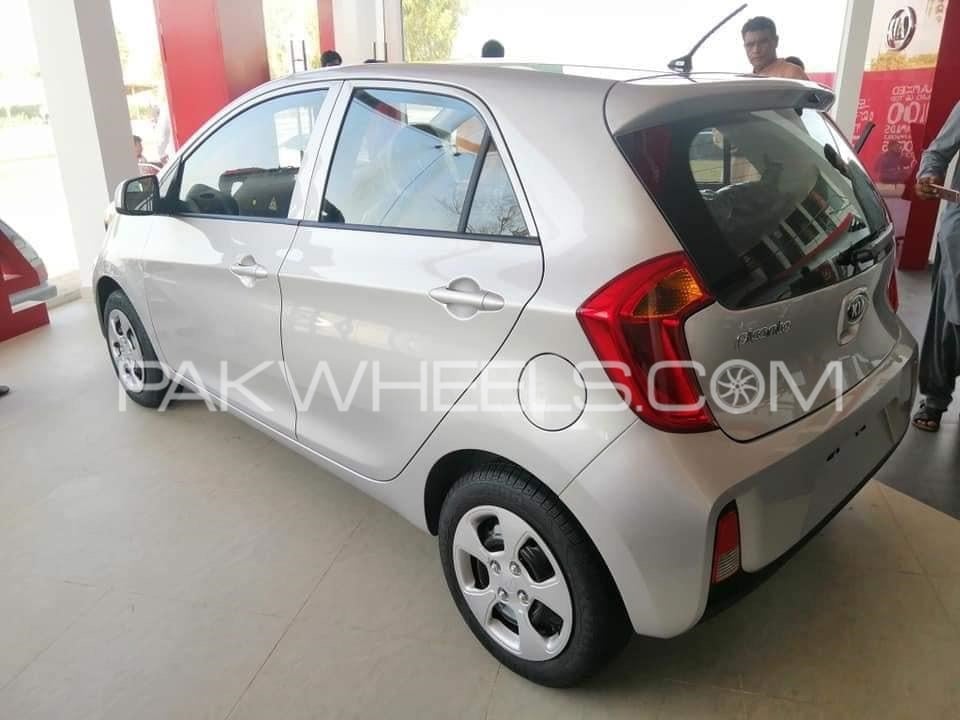 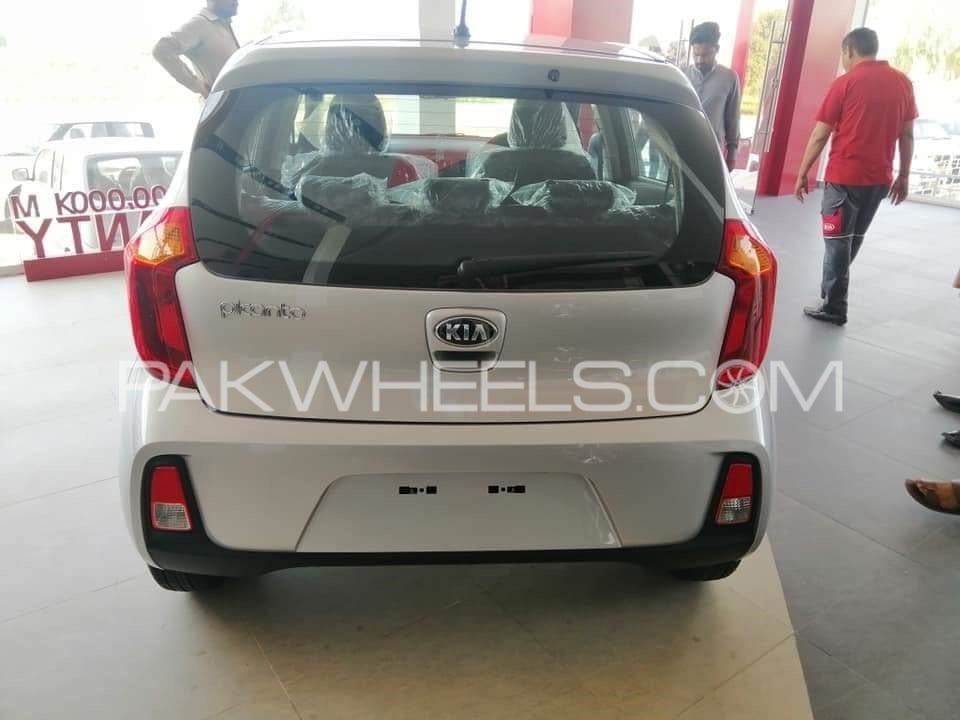 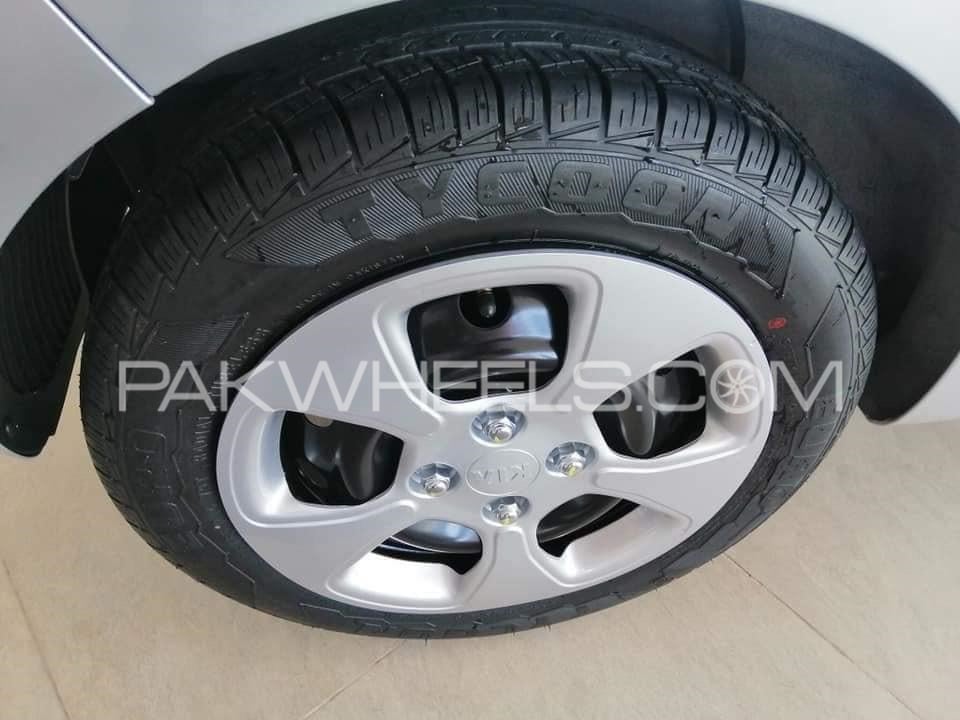 The rear side has a lowered rear screen installed with a single-speed wiper. The vertical shaped stylish taillights have a rear combination lamp, and a high-mount brake lamp installed. The rear bumper is body-colored, and the presence of reflectors enhances the looks of the hatchback.

The hatchback of KIA is relatively spacious from the inside. The cabin has a black interior with a few strips of silver running on the bottom of the dashboard. It has a 2-spoke polyurethane steering wheel with silver-colored garnish on the bottom. The power steering is also provided with EPS and tilt adjustment feature along with a trip meter control in it. The instrument cluster is a classy combination of red and white lights. It has several meters including a tachometer, trip computer, and MT shift indicator. The center fascia has metal garnish look with a digital clock installed in it. The cabin has ample storage spaces and cup holders at the front and the back. It also has a sunglass holder on the driver side. It has a cigar lighter and a portable ashtray available. The cabin is provided with a 12V accessory socket for charging purpose. The hatchback has assist grips on the front passenger side as well as on both rear seats with a coat hook. 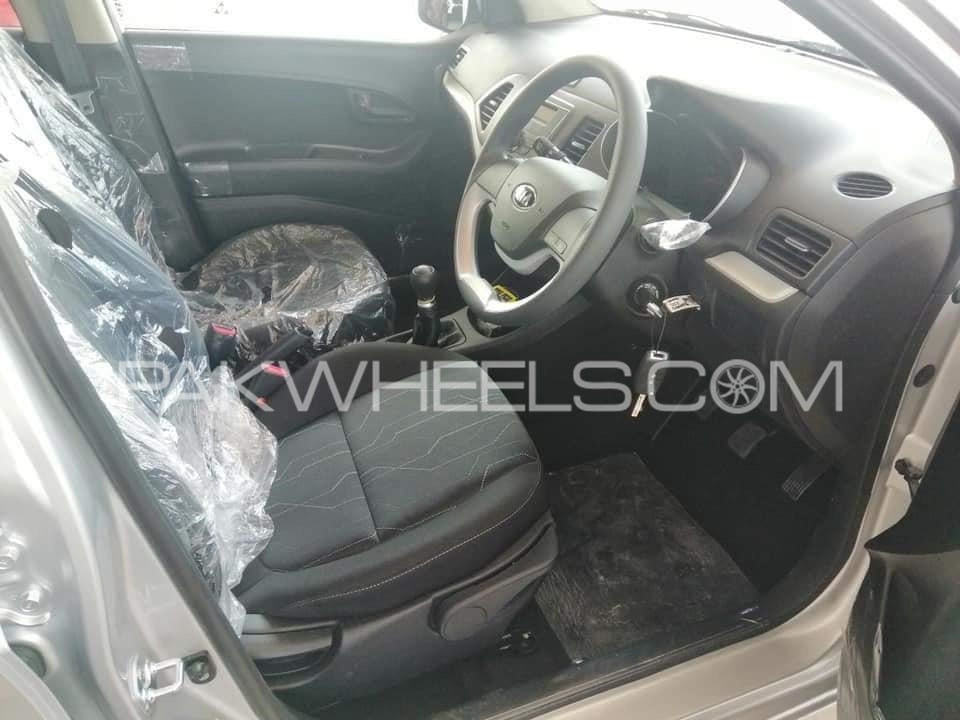 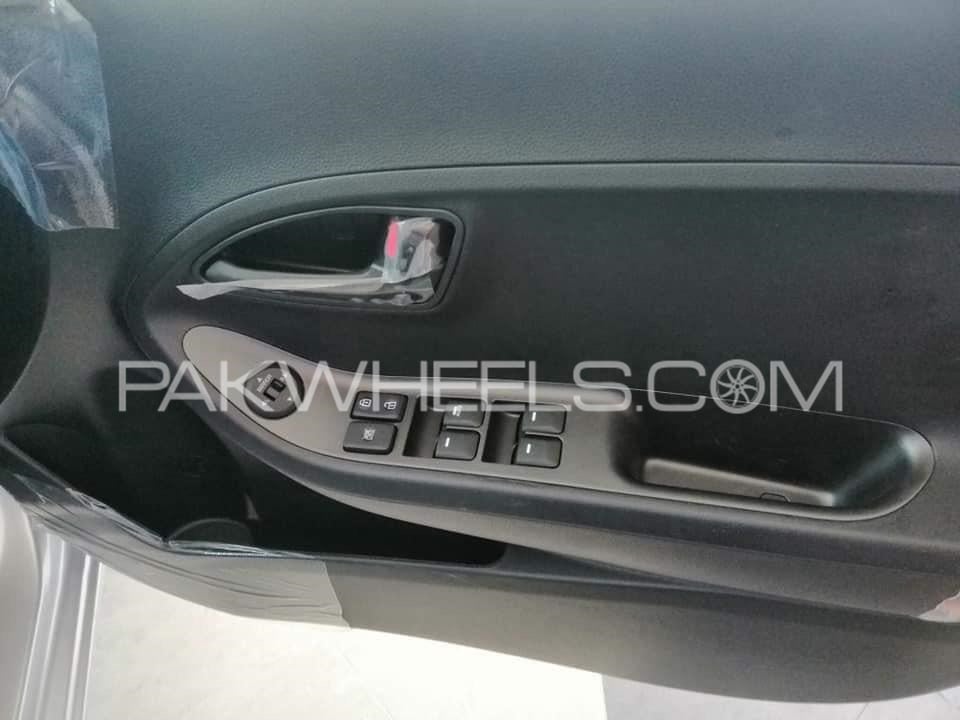 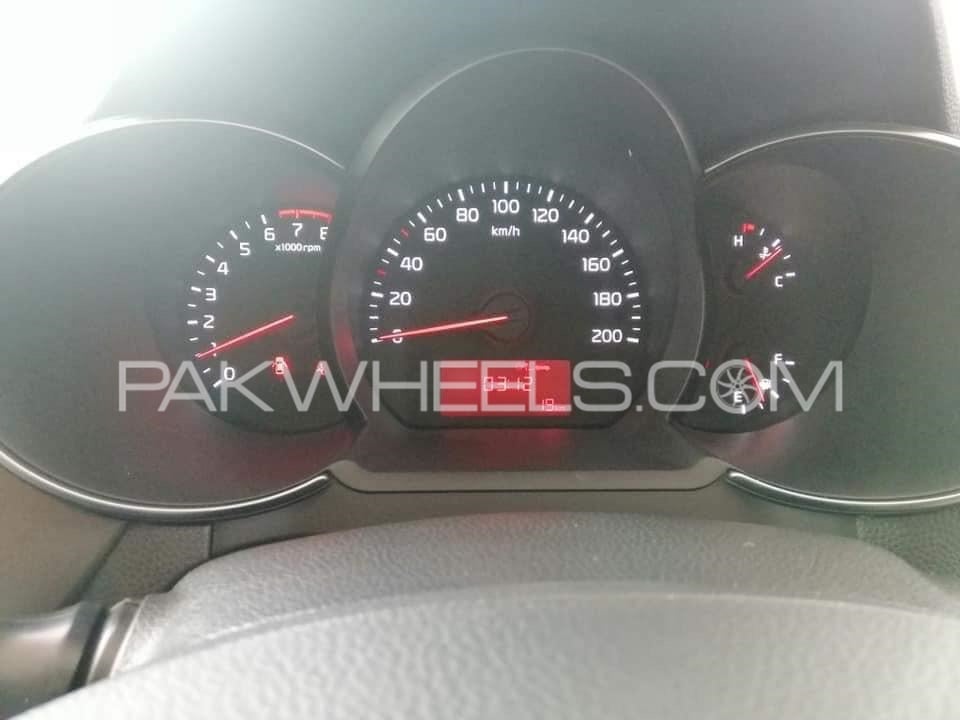 The cabin has ambient light at night and provided with several lamps in spaces such as the overhead console, gear clutch foot, glove box, and luggage area. The seats also have back pockets for storage purpose. There is also a tray present underneath the front passenger seat as a storage compartment. The hatchback has electrically adjustable side mirrors, and all the windows at the front and the rear are powered. They are provided with SW illumination with time lag function.

KIA Picanto is designed in a way to support comfort in all terrains. The cushioning of the seats is reasonable that supports the sitting posture considerably. The material used in the seats is premium black fabric. The driver seat has a feature of manual height adjuster whereas both the front seats have an adjustable headrest for convenience. The passengers sitting on the rear seats also have the luxury of adjusting the headrest. The rear seats also have a 60:40 split ratio. Both the front and rear seats are provided with seat belts for safety purpose. The hatchback comes with a keyless entry system for convenience. It also has a feature of manual climate control for both air conditioner and heating. 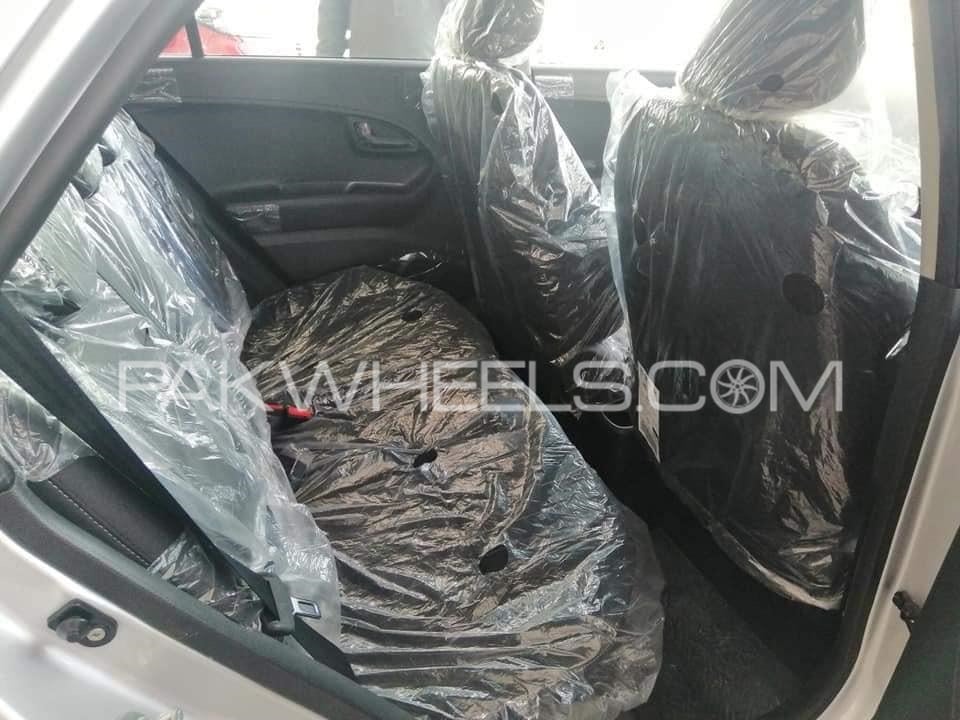 KIA Picanto is equipped with an MP3 system having the connectivity features of Radio, AUX, USB and Bluetooth audio and call function. There are as many as four speakers available in the car (2 at the front and two at the rear) for an optimum sound system balance. A micro-type antenna is present for connectivity with Radio. 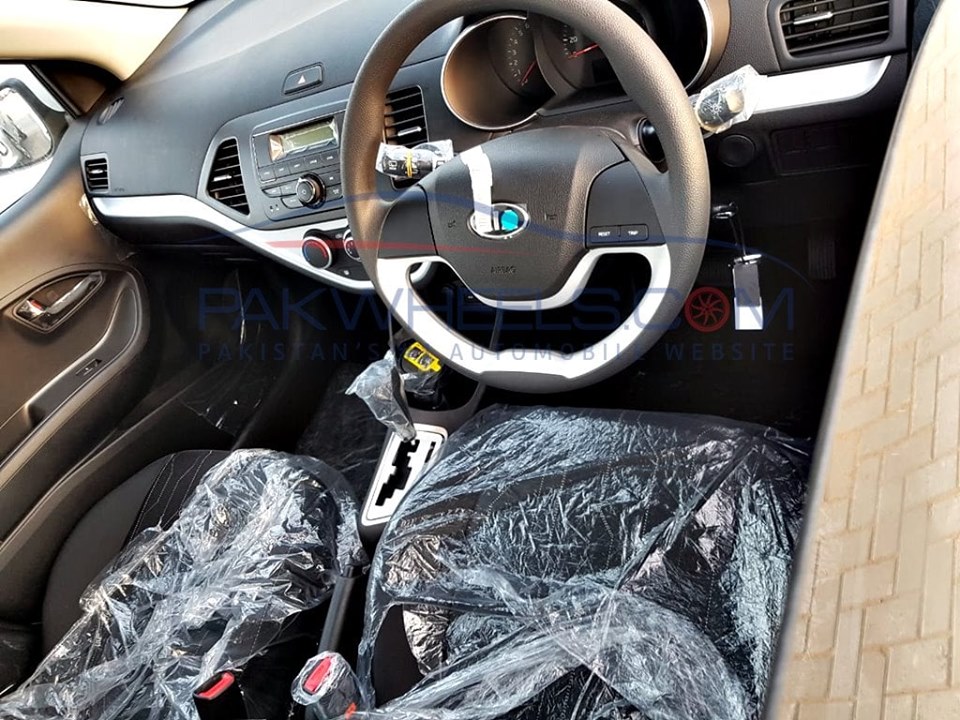 KIA Picanto is powered by several safety features which often lack in the locally produced cars in Pakistan. The hatchback has two airbags (one each for driver and passenger) as the basic safety while driving. It also comes with an immobilizer key for security purpose. The central door locking system switches are present on the driver’s side for enhanced safety. The hatchback is equipped with an anti-lock braking system (ABS) for a quick response on braking. Furthermore, it comes with a burglar alarm and security system installed in it for additional security. ISO Child Fix is also provided at the rear side s standard which is generally not provided in the hatchbacks in Pakistan.

KIA has not disappointed its customers in any way. The company is offering optional accessories at an additional cost. These accessories include the following:

The customers can opt for these additional accessories by paying extra money. Nonetheless, KIA Picanto is a wonderful addition to the hatchback segment in the country. In the presence of above features, it’s bound to give a serious competition to Suzuki Cultus, and Wagon R. Its price also falls in the price bracket of Suzuki Cultus which makes it a much better choice in this segment.

What are your thoughts on the all-new KIA Picanto in Pakistan? Drop your opinion in the comments space below and stay tuned to PakWheels for more updates.