Local and imported helmets to be sold at fixed price

Lahore – The District government in a meeting with Auto Union – McLeod Rd, set the standard rate for both the local and the imported helmets on Friday 28th September 2018.

The authorities have decided rupees 500 for the local helmet and rupees 1150 for the imported one. These rates will come into effect from Friday, i.e. today. This step is taken to curb the helmet prices that hiked after the Lahore High Court passed the order to take strict actions against the bike riders who are found not wearing the helmet while the ride. Rs 1000 has been imposed as a fine on the violators. 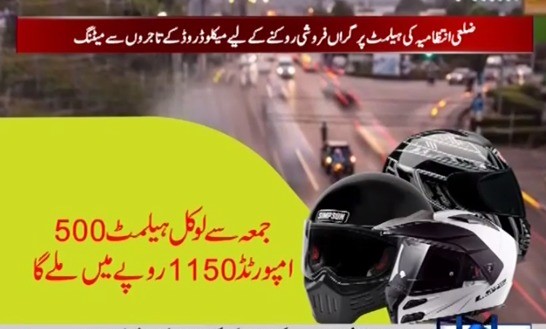 Moreover, strict action will be taken against the sellers who will be found selling the helmets for more than the standard rates.

The Lahore High Court is taking strict measures to make sure people follow the traffic laws and avoid any life-threatening event. On 24 September 2018, Punjab Safe City Authority (PSCA) in collaboration with the Punjab Police introduced the E-Challan system in Lahore. Violations will be detected with the help of CCTV cameras installed throughout the city and if someone violates the traffic rules and regulation, an e-ticket fine will be generated and will be sent to the violator via courier service.