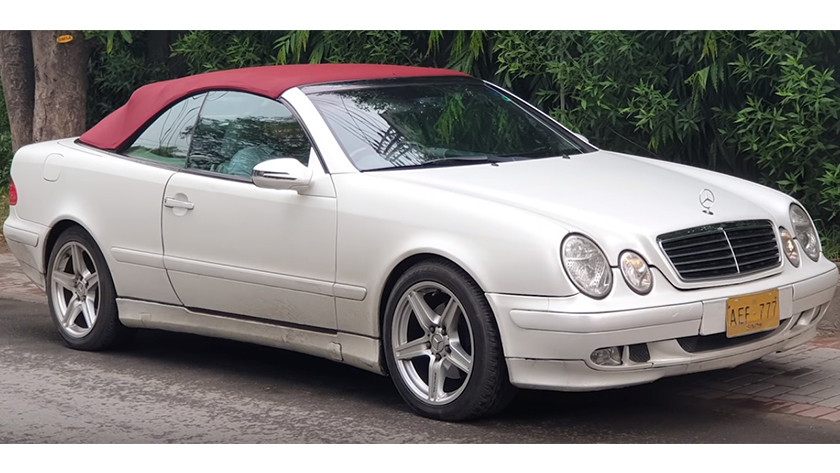 Keeping up with the tradition of bringing car reviews to its users, Pakwheels.com brings you a detailed review on Mercedes CLK Kompressor. A Mercedes CLX 230 Kompressor convertible from 2000, to be precise that the owner has had for two years now. The vanity vehicle is beautiful and would no doubt offer a pleasant drive during Lahore’s good weather days.

The other option in this cost bracket for convertibles is the Mercedes SL 2005 model, which was a two-door, roadster and hardtop convertible. The CLK was the only soft-top convertible produced by Mercedes. Soft top convertibles are better suited than hardtops in terms of sounds. Invariably there is a squeaky sound of the rubber parts and joints which can be heard inside the car. As the hardtop convertible parts age, there is a delay in the roof as well as annoying sounds. The way to sort this problem is to replace the rubber set which cannot be found locally and must be ordered from abroad. Hence, it is understandable why people would opt for the soft top.

Mercedes CLK produced from 1996 to 2003. The new generation started 2003 onwards till 2009. Following this, the CLK was discontinued, and replaced by the E Class coupe. The sleek automobile has a chassis code of 203.

The CLK is a two-door convertible with a rear-wheel drive. The car is a four-seater convertible, making it family-friendly. There is a slight issue of less leg space in the back seats. Young kids can comfortably sit in the back, but tall adults may find the place slightly congested. Entry/exit to the back seat can be tedious because the front seat needs to be pulled forward for people to get in. With time, the functionality of this function starts to get affected.

Boot space is separate from the area where the soft top is stored when it’s down. A normal-sized suitcase can easily fit inside the boot.

The sound system is ambient. The vehicle is equipped with a woofer in the middle, and four speakers in the front.

Kompressor technology was introduced for the first time in CLK and SLK. M111 engine. The engine is 2.3 supercharge 4-cyl. The engine had a power of 194bhp.

Ground clearance is not an issue if one has patience. There is a widespread opinion that the convertible is too low, but with enough patience, the car can be taken anywhere. The owner drove the vehicle to Khunjerab Pass, through Besham and did not have any complaints.

People have concerns that with convertibles, especially soft tops, the cold air may escape. However, there is proper insulation in the soft top, so the cooling is excellent. It also has heated memory seats.

There is an issue with the BAS code. BAS stands for Brake Assist System. The system provides additional braking power in case of emergencies. The switch is for around 2000 rupees and needs to be replaced intermittently. The code disturbs cruise control.

Moreover, the issue with the Mercedes of this series was that its AC compressor was faulty. Another common concern was that the headlights would get foggy, but aftermarket headlights can be found easily.

Overtime issues with the convertible top may arise. The calibration gets off because parts get faulty, and there may also be a delay. If the hydraulic shocks got leaked, which effects calibration negatively.

Unfortunately, in our country, the public also causes issues with parked convertibles. People like to poke holes in the soft tip with pens or sharp objects. If the soft top is damaged, you need to order a whole new one.

The owner was happy to inform us that Mercedes car parts are readily available in Pakistan. People who want to customize their cars according to their preference, even if it’s for an old car should face little to no issues. Engine parts and mechanical parts are easy to find, but there can be an issue with lights.

Used parts are mostly available, especially engine parts. You can find new suspension parts like shocks. Electronic sensors such as airflow sensor can be found both used and new.

If the car is maintained regularly and properly, it doesn’t create any significant issues as such. Considering the prices for the car parts, they are in the same range as Honda parts today.

In the city, the fuel average is usually about 8.5 to 9kmph. The fuel average is good, more so if you drive with a light foot. The average oil service costs approximately 8000 to 9000 rupees, after every 3000 to 4000kms.

The owner bought the car for 24 lacs end to end, that is including maintenance and all other costs.

Considering the overall costs that go into this car, this is a value for money vehicle. The car does not lack any features as such. The car is enjoyable and bought for one’s happiness. With a little patience, having this car can turn into a delightful experience.

It’s a four-seater, and hence, doesn’t present the restrictions of a two-seater.  An excellent choice for people with families, looking for a convertible. It would make for a beautiful driving experience with the family.

Keeping practicality, price, and feasibility in mind this is an excellent option for a convertible.

Pak Suzuki jacks up the prices of its motorbikes