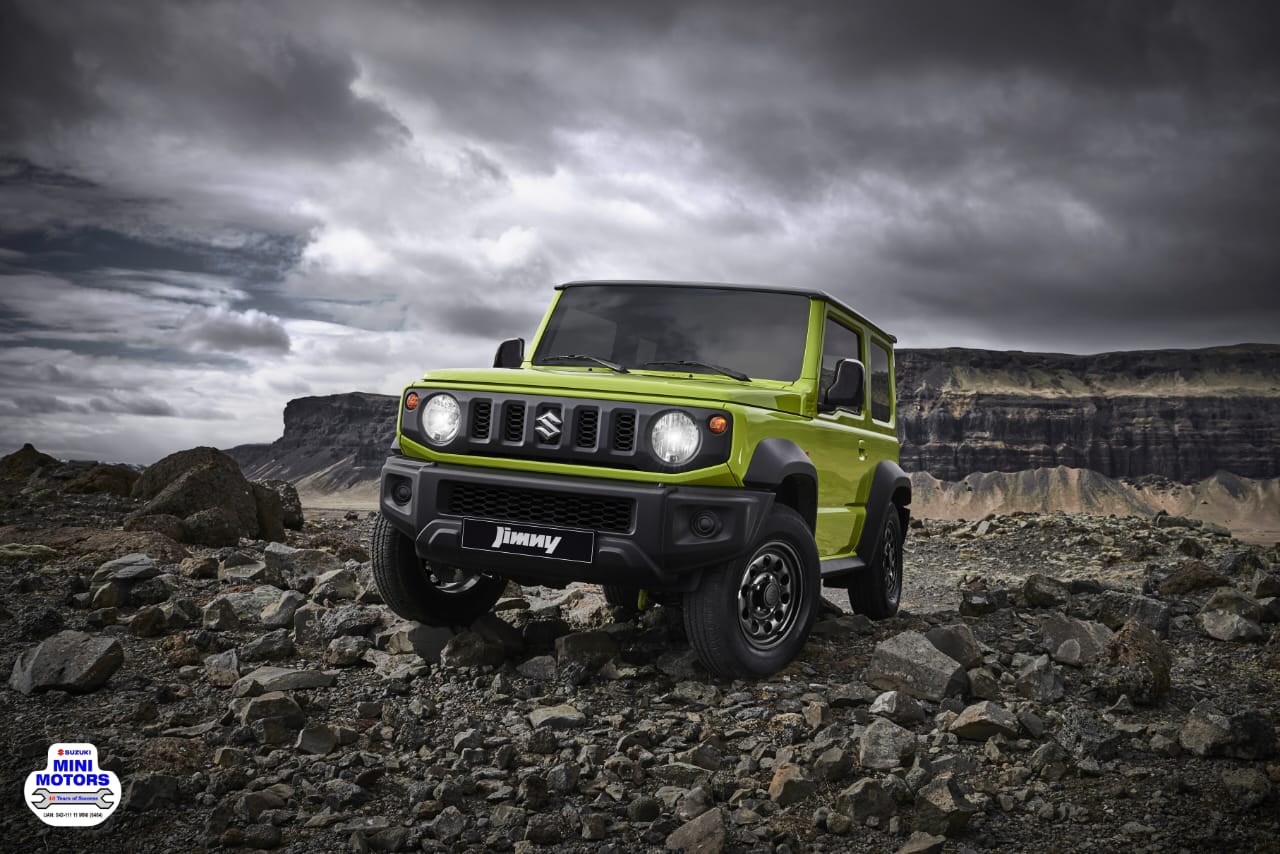 Suzuki Jimny’s specs and price revealed – Have a look

The 4th generation of Suzuki Jimny is finally here as the company has launched the vehicle. Let’s take a look at its specifications, price, and features for the local market. Note here that Suzuki has also started taking bookings as well. 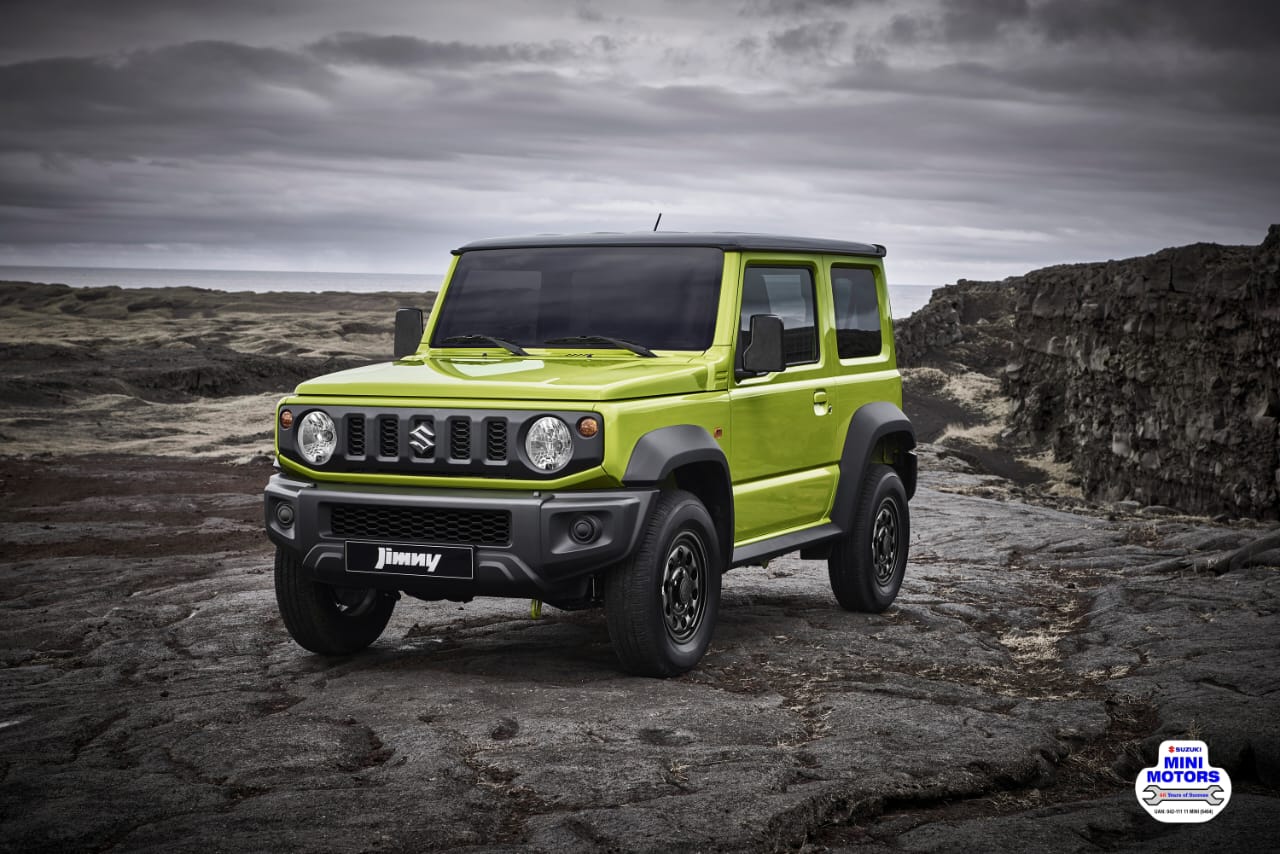 According to the details, PakWheels previously reported that the Japanese auto manufacturer is gearing up to launch the 4th generation of Jimny in Pakistan. The wait is over, and we have all the details related to the all-new Suzuki Jimny. Globally, its production started last year as it was first launched in Japan on 5th July 2018. The new generation of Jimny has been completely revamped by the automaker; however, its boxy design language keeps it recognized among others in the market. The company recently released a teaser which highlights the fact that it has the power to reach where no one else can. The 4×4 is back yet again in its next-generation, and this time it’s equipped with so many upgraded features. Suzuki Jimny has always been perceived as an overly priced vehicle in Pakistan as per the features it has on offer. The 3rd generation of Jimny was available in Pakistan at Rs.2,620,000. Note here that Pak Suzuki is only offering one 5-speed manual transmission variant of Jimny in the country. The 4WD vehicle is available for booking at full price, and the customers can visit their nearest authorized dealership of Suzuki for further details. The delivery time of Suzuki Jimny is five months from the date of booking. Note here that Jimny will be imported as a completely built unit (CBU). Pak Suzuki is also importing the base model of 4th generation of Jimny.

Suzuki has brought the all-new 4th generation of Jimny at an introductory price of Rs.3,890,000 in Pakistan. According to the company, this price is valid on limited stock only, which means that its price will be raised very soon. As we know that it’s a CBU unit, several duties and taxes are imposed on the vehicle that plays a vital role in raising its price.

Suzuki Jimny GA is equipped with the advanced K15B 4-cylinder 1.5L VVT petrol engine with 12 valves under the hood. It’s more thrilling than ever before and offers considerable power for off-road adventures. Jimny is a part-time 4WD vehicle which is coupled with a 5-speed manual transmission. With an engine of 1462 cc, it has a compression ratio of 10 while the bore and stroke are 74.0 × 85.0. The 4WD is specifically built for off-road driving, and it produces a maximum output power of 75 kW at 6000 rpm. With a multi-point fuel injection system, its engine can produce a maximum torque of 130 Nm at 4000 rpm. The vehicle can be accelerated up to a maximum speed of 145 km/h. Suzuki Jimny makes you feel empowered with its powerful and robust engine, which also delivers high fuel efficiency at the same time.

The latest generation model of Suzuki Jimny has a larger footprint as compared to its previous models. The bumper to bumper length of Jimny is 3480 mm while it becomes 3625 mm when it’s measured from the front bumper to the rear spare wheel. It has a width and height of 1645 mm and 1720 mm respectively. It offers a wheelbase of 2250 mm, which is the distance between the centers of the front and rear tyres. It has an outstanding ground clearance of 210 mm, which makes it a perfect fit for all types of off-road adventures. It also has a minimum turning radius of 4.9 meters which helps on sharp turns. With these dimensions and specifications, it has a great ability to handle steep slopes, obstacles, sharp descents, etc. with much ease. Its ample body angles including departure angle, ramp break-over angle, and approach angle when coupled with the 210 mm ground clearance, make the vehicle safe from any under-body or bumpers scratching. It has a departure angle of 49 degrees whereas the ramp break over and approach angles are 28 degrees and 37 degrees. 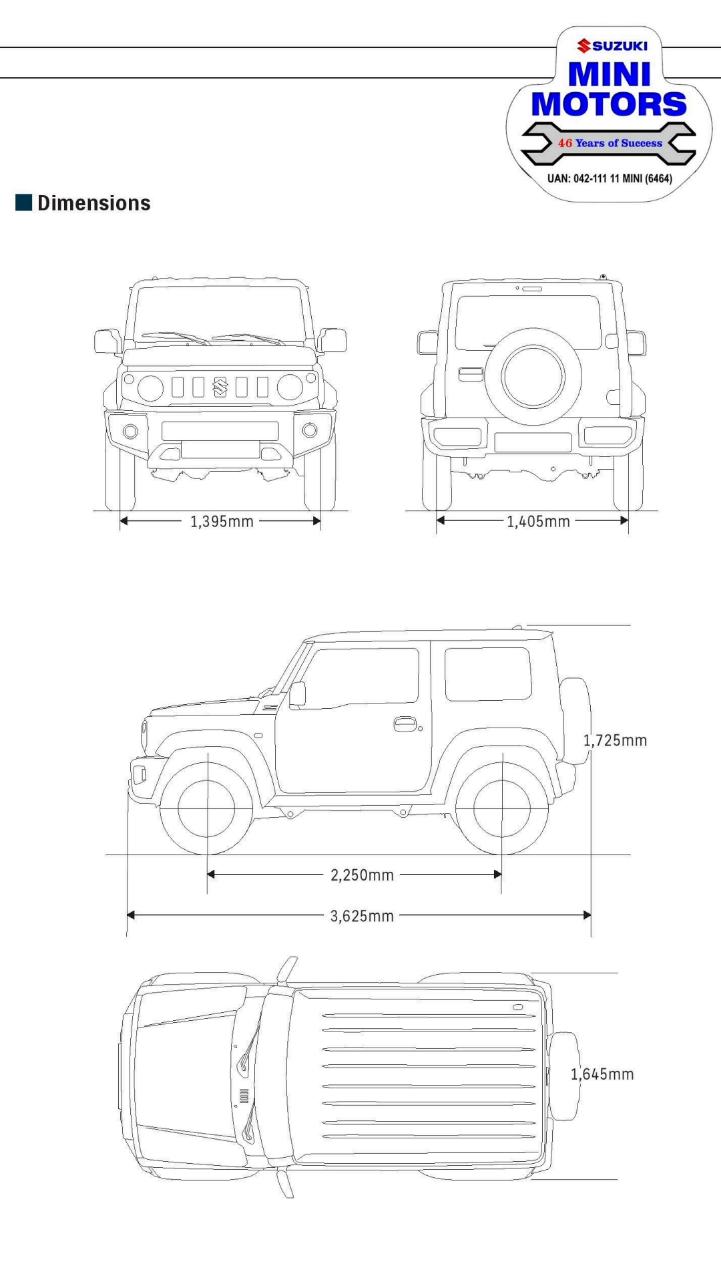 The 4×4 Jimny can accommodate four persons. However, it has a huge cargo capacity with a maximum volume of 830 liters which is enhanced by folding the back seats. The customers can fold single or both seats according to the space required for cargo. Jimny has a kerb weight of 1080 kg whereas its maximum gross weight is 1435 kg. The gross weight of a vehicle includes the weight of the chassis, engine, passengers, etc. Moreover, it has the capacity of 40 liters fuel tank. 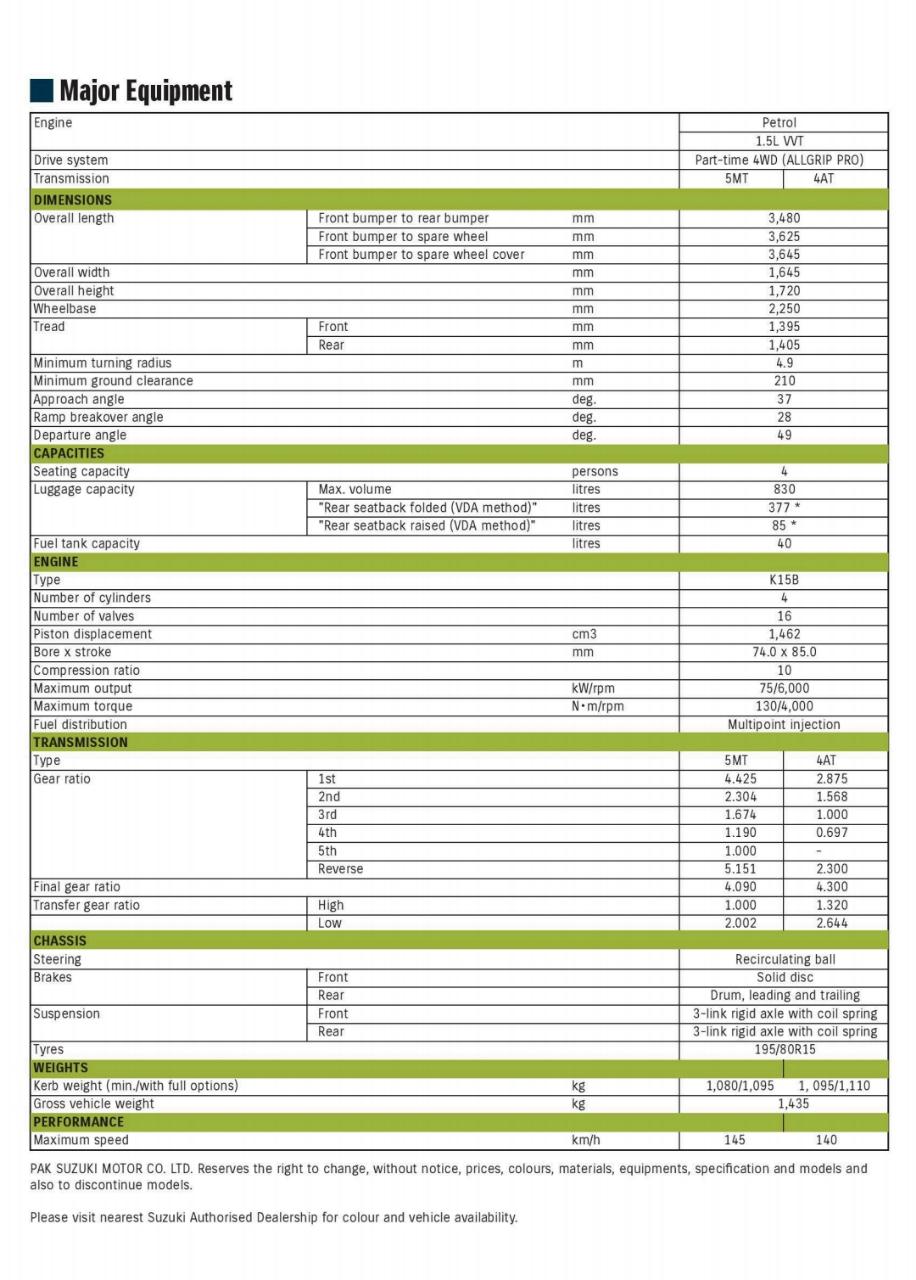 Suzuki Jimny 4th generation is a serious contender for an off-road adventure machine among its rivals. The company has kept its trademark robust ladder frame which provides a solid foundation while traveling on all types of terrains with maximum durability. As discussed earlier, its three different body angles, including departure angle, ramp break-over angle, and approach angle help in handling slopes and sharp descents. It has a 3-link rigid axle suspension with coil spring at the front and the rear which ensures a much better grip on different kind of surfaces. In case of an obstacle when one wheel is pushed up, the axle helps in pressing the other wheel downward, which increases the tyre contact with the surface, thus offering enough control to the driver. Suzuki Jimny comes with disc brakes at the front wheels whereas the rear wheels are equipped with drum brakes.

Suzuki Jimny is retro-styled as it inherits its design language from its previous models. The 4th generation Jimny also has a boxy design with a clamshell bonnet and a horizontal slit-like design. It has round-shaped multi-reflector halogen headlamps accompanied by round indicators. The front radiator grille is black in color and has vertical stripes. The bumper is also black in color which is designed with angular edges which help in driving through obstacles on the way through. The vehicle’s body is provided with round black-colored safeguards which act as protectors of the body from scratches and stone chips. The windscreen of Jimny is made from UV-glass. The windscreen wipers are provided with 2-speed control with intermittent and washer. From the side view, it has defined horizontal lines across the body. The outside door handles are body-colored while the side mirrors are nearly square in shape and black-colored. Suzuki Jimny has a solid body which is built to tackle any sorts of weather conditions and terrains. The standard tyre size used by the manufacturer is 195/80 R15, and it comes with steel wheels. It also has a same-sized spare tyre vertically attached to the body of the vehicle. The rectangular taillights are installed in the bumper. It also a high-mount brake lamp installed at the rear side. All of its windows, including the front door windows, quarter and tailgate windows are green-tinted. It also has a rear screen wiper provided with a washer which can be operated at a single speed. The tailgate can be opened using the vehicle’s key. 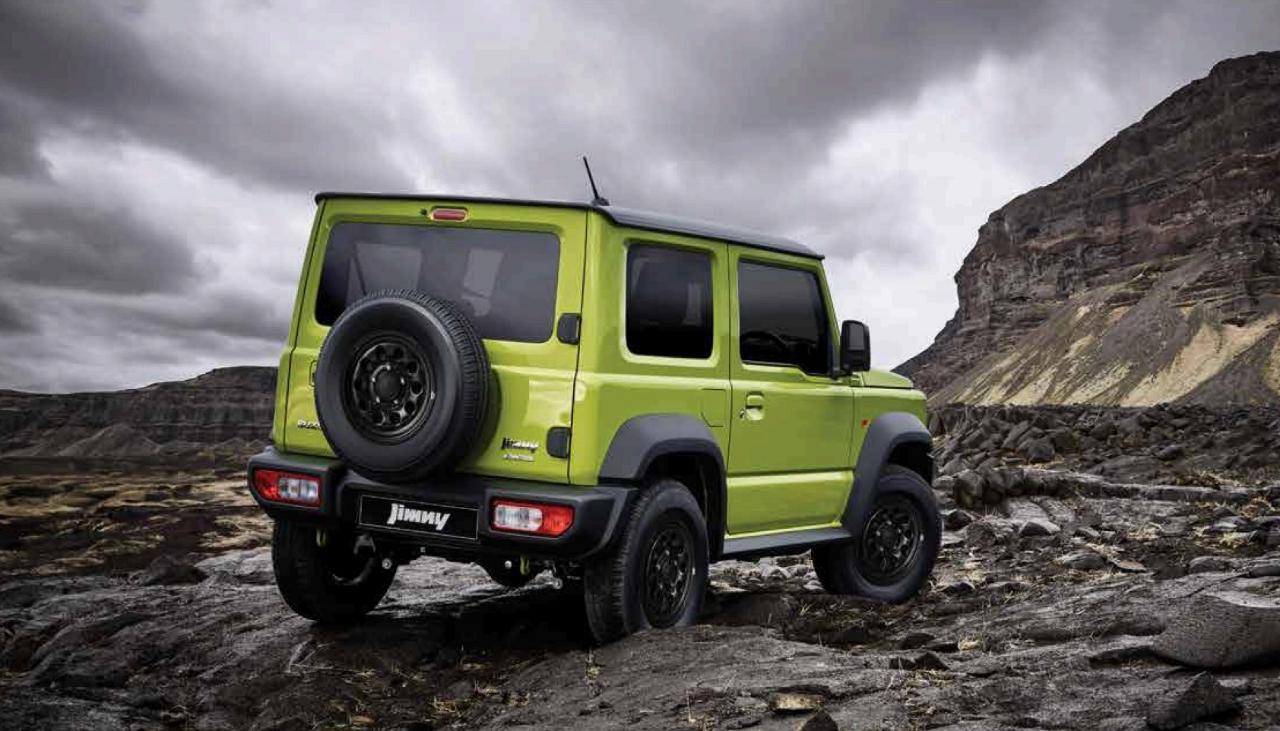 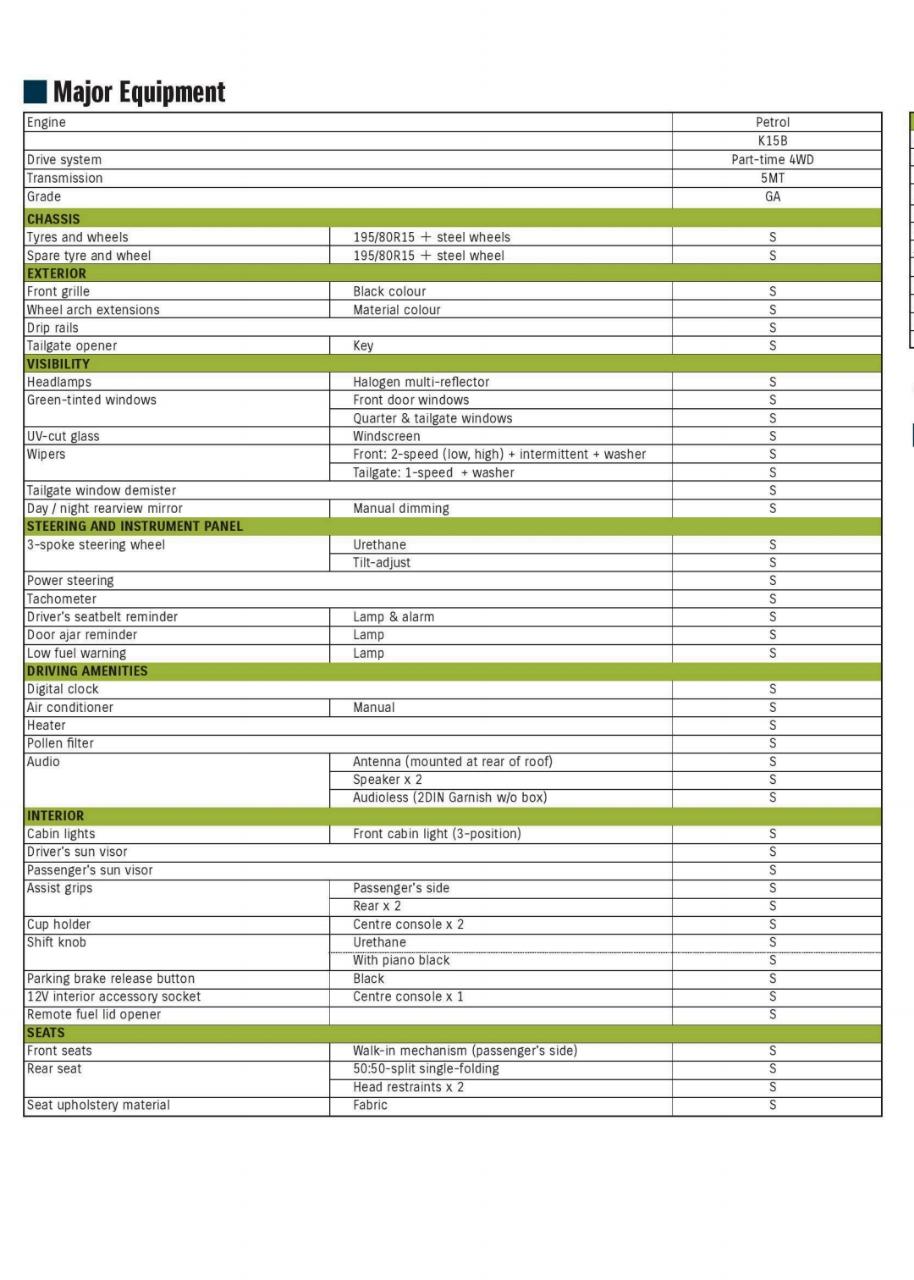 The interior of the 4th generation model is revamped by the manufacturer completely as it has a down to earth design. The black-colored stylish dashboard is simple and straight forward in design. However, the details are exquisitely crafted all around. The cabin is also very spacious as compared to the previous versions of the jeep. It is equipped with an air conditioner which has manual climate control feature. The center air-vents are rectangular in shape while the side ones are round. The heating system is also present inside the power-packed Jimny. The addition of the pollen filter is an exciting element in the jeep. It has a digital clock and a front cabin light with a 3-position control. Sun visors are provided for both the driver and passenger’s side. Inside Jimny, assist grips are also provided on the passenger and the rear side. The gear shift knob is made from Urethane with piano black. The parking brake release button is also black in color. The rear-view mirror has manual dimming feature for day/night. It also has a remote fuel lid opener. For enhanced visibility during bad weather conditions, the tailgate window has a demister feature. In terms of entertainment, there is not much to look out for. It has an antenna mounted at the rear side of the roof. Jimny is equipped with two speakers in the cabin for basic entertainment sound. The cabin also has 12V accessory socket in the center console which keeps your batteries charged all the time.

The instrument panel is always illuminated regardless of the time of the day. It offers clear visibility during the day or night time and is built in quite a straight forward manner. It’s equipped with a speedometer and several real-time parameters list. There are separate lamps for low fuel warning and door ajar reminder. A lamp and alarm system is also present which illuminates and beeps if the driver is not wearing the seat belt.

Suzuki has improved the comfort level of Jimny to a greater extent in the 4th generation model. The entry and exit for the rear side passengers remain from the passenger’s side through a walk-in mechanism, but it’s much more convenient than ever. The upholstery material used for the seats is good quality fabric which is also black in color. Head restraints are also provided for enhanced comfort while going on off-road adventures on rough terrains. The seats are also much more comfortable, thus ensuring a tireless driving and traveling experience. The rear seats have a 50:50-split single folding feature to increase the luggage space. The cabin has several storage spaces including two cup holders in the center console. It has a 3-spoke power steering wheel which has the tilt-adjustment feature for the convenience of the driver.

The Japanese auto manufacturer has ensured the safety of the driver and passenger by providing two SRS airbags at the front. 3-point ELR seat belts are present for the driver and the passenger whereas 2-point ELR seat belts are also provided for the rear seats. As many as two ISO-FIX Child seat anchorages are present at the rear, which is another important safety feature in the jeep. Suzuki Jimny has ABS brakes which offer responsive and safe braking and adds more convenience for the driver while driving. In case of an impact from the side, its doors are equipped with beams for additional safety. On the rear side, it has a high-mount brake lamp which shows a clear braking indication to the traffic coming from behind. Jimny is powered by an immobilizer for security purpose.

Since the automaker has specifically made it for off-road traveling, it has several other safety features which include hill-hold control, hill descent control, and brake LSD traction control. Hill Hold Control helps the driver to focus on controlling the acceleration of the vehicle while going up on a steep slope. It prevents the rearward rolling of the vehicle even on a bumpy slope. Similarly, as its name suggests, Hill Descent Control guides you on tricky downward slopes with the help of automatic application of brakes and maintains a fixed speed. The Braking Assist System named as Brake LSD Traction Control helps on slippery surfaces. The system is designed in such a way that in case the diagonal wheels lose their grip with the ground, it applies brakes on the slipping wheels. At the same time, the system redistributes the torque to the other two wheels and helps in escaping from the situation. 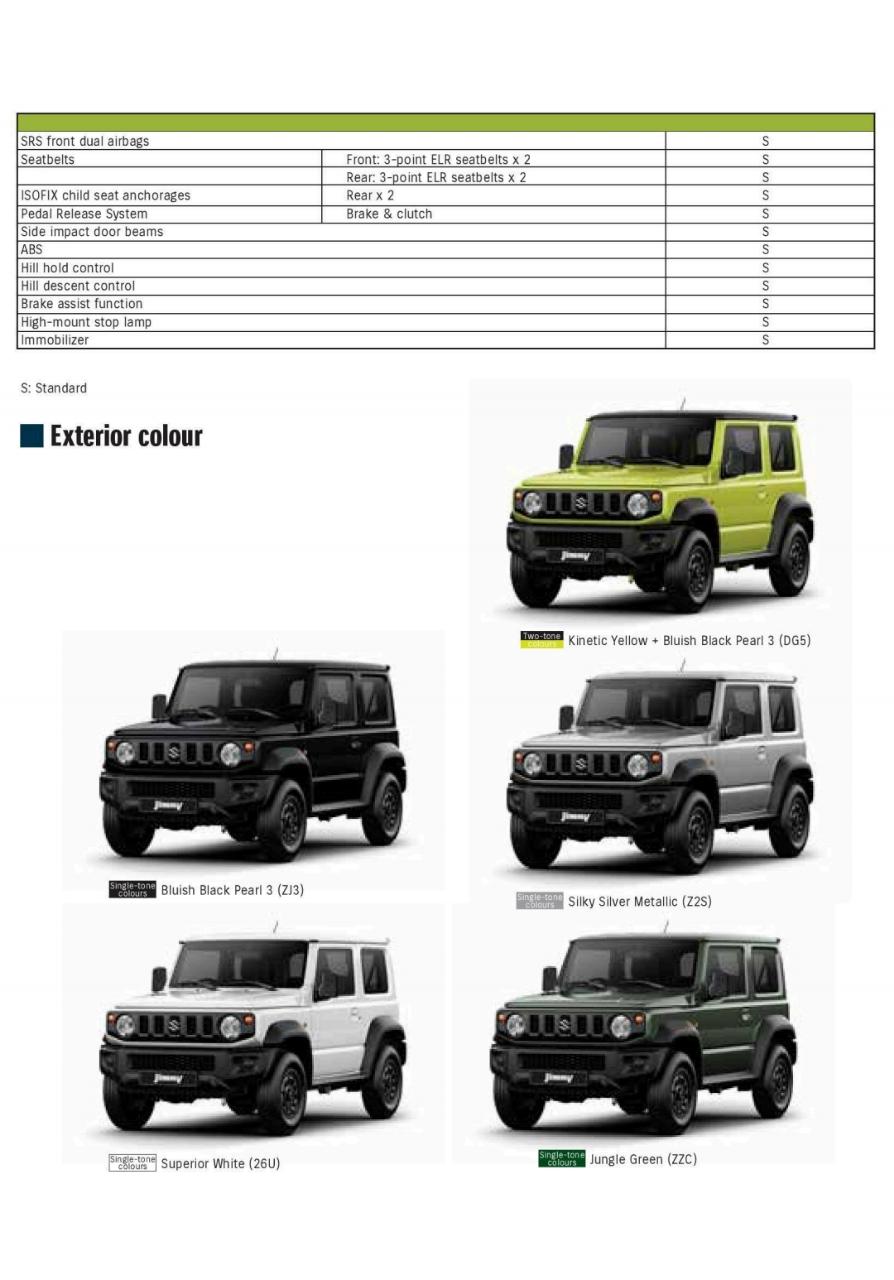 The all-new Jimny is available in as many as five colors including four single-tone colors and a two-tone color as mentioned below:

Share your opinion on the all-new Suzuki Jimny in the comment space below. Stay with PakWheels for more automobile-related updates.

IMC to keep its production plant closed in September