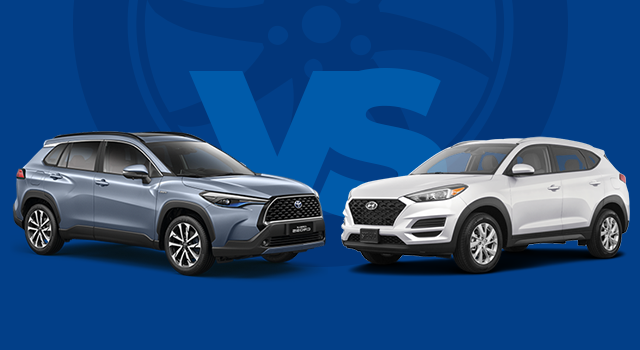 Toyota Indus Motor Company (IMC) has officially launched the Toyota Corolla Cross. The luxury SUV is available in three variants: Premium High Grade, Smart Mid Grade, and Low Grade. Today, we have for you a detailed comparison of the  newly launched Toyota Corolla Cross Premium High Grade and Hyundai Tucson AWD. Both are top-of-the-line variants of the two SUVs. Although Corolla Cross is a Completely Built-Up (CBU) unit, while Tucson AWD is a Completely Knocked-Down (CKD) unit. Still, they are each other’s potential rivals, hence this comparison. So, let’s get started!

Under the hood of Hyundai Tucson AWD is a 2.0-litre MPI petrol engine that produces 155 horsepower and 196 Nm of torque. The 1.8L hybrid engine of Corolla Cross delivers more power and fuel economy than Tucson’s 2.0L petrol engine.

Tucson’s panoramic sunroof makes it better than Corolla Cross. Other than that, the two SUVs have the same exterior highlights.

Cruise control, front and rear parking sensors, rain sensor, and a dual-zone auto air conditioning system are the standard features in both SUVs.

Toyota has priced the Corolla Cross Premium High Grade variant at Rs. 8,399,000. Hyundai is selling the Tucson AWD variant with a price tag of Rs. 5,599,000. There is a price difference of 28 lacs.