Although we had DBW (drive-by-wire) in few cars relatively longer than you might expect, Pakistani consumers and mechanics widely came to know about this system when it was introduced at large scale in 8th generation Honda Civic. Before that, imported Toyota Mark II or Mark X and Honda Accord CL7/9 and few others had DBW.

In this article, we will try to explain a little bit about the drive by wire throttles bodies. Your accelerator pedal is connected to a sensor that sends the signal to the ECU when you press the pedal. The sensor is called Accelerator Pedal Position sensor. It not only measures angel of the pedal that how much is it pressed but also the quickness of the press/depress.

The ECU then sends the signal to an actuator motor mounted on the throttle body that controls the butterfly inside. The actuator motor opens and closes the butterfly with precision and under control of the ECU. On the other end of the throttle body, there is a throttle position sensor that then tells the ECU the exact opening or closing position of the butterfly. This gives the ECU very precise numbers and it can then control the fuel injection very efficiently maintaining better fuel average. Electronically controlled throttle can then be an aid to help the vehicle run on cruise control as well.

Both accelerator pedal position sensor and throttle position sensor, in a way, keeps an eye on each other. If one malfunctions, the other sensor will inform the ECU by sending in the correct values and ECU will immediately turn on the Check Engine light.

DBW or sometimes also known as x-by-wire like any other technology has its advantages and disadvantages. One major advantage is its safety side. If ECU is controlling your race pedal as well, it can manage other safety options like vehicle stability control, or ABS, or cruise control or your car’s electronic power steering much more efficiently and safely in case of an emergency. Also, the response time is much quicker in DBW than in mechanical accelerator and throttle body.

One major disadvantage is the cost. It always is going to cost more to fit extra electronic units and motors than to just put a simple metal wire in it to control the butterfly. With the passage of time and advancement in technology, we now have brake by wire, shift by wire, steer by wire and couple of others. 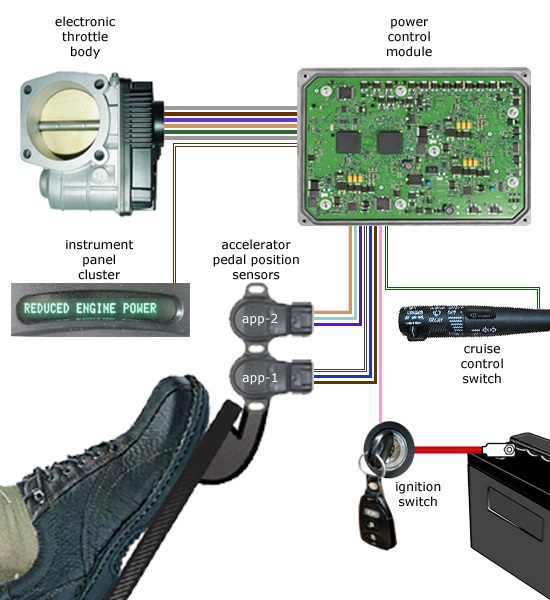 A Mint Condition 2004 Mitsubishi Lancer For Under 500K… But There’s A Catch!