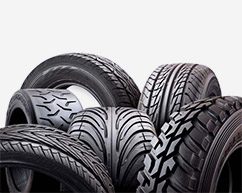 Tyres have two categories RADIAL and BIAS (or CROSS PLY). The radial tyres are a newer introduction while bias is old technology. The difference between the two lies in their construction.

In Radial tyres between the carcass and the tread are a number of belts, usually of steel which are perpendicular to the centre line. The belts provide stability at high speeds. In some good brands the belts are covered by full cap ply that provides additional stability, protection and longer life. All radial passenger car or light truck tyres, manufactured by General Tyre have the cap ply as standard.

Point to note. Lower the aspect ratio the harder will be the tyre. It is preferable to stick to original size as specified by the vehicle manufacturers.