Honda CD 70 was formerly known as Honda 70 and is a four-stroke motorcycle manufactured by the Japanese company Honda. It was produced by Honda from 1970 to 1991 and later on, in 1991, its production moved to Atlas Honda in Pakistan.

The Honda CD 70 was introduced in the Pakistani market in 1984 and it instantly dominated the market. The CD 70 replaced the two-stroke motorcycles and Vespa which was the only popular two-wheeler at that time. The CD 70 was the first four-stroke motorcycle in Pakistan due to which it became popular very quickly. Since its launch, it has maintained the highest resale value in Pakistan.

Initially, the rectangular speedometer on the Honda 70 featured gear range markings and a maximum calibration of 60 mph (97 km/h). Its claimed top speed was 58 mph (93 km/h). Over time, it went through several upgrades, both in exterior design and engine. In 1984, it was rebranded as Honda CD 70 with a modified engine, carburetor, and rear indicators.

Currently, the engine of Honda 70 is a certified Euro II engine and goes a long way if taken care of properly. The new model Honda CD 70 2023 has been unveiled recently and according to Honda, the new model has 101 changes in design and engine combined.

The CD 70 2023 new model has a newly designed engine as well as new color graphics. The muffler exhaust makes the ride less noisy and a high-quality drive chain makes the ride smooth and comfortable.

The Honda 70 2023 model has a sleek design that has no noticeable differences from the previous model’s design. The CD 70 comes with a backbone-type frame. Its design is aimed at making the vehicle look sleek while also making the ride comfortable. The comfortable seat comes with a seat bar for additional security. The new 2023 model also has some tweaks in the external design of the fuel tank and an all-new cover sticker. Both the wheels have thicker spokes than before and the rear wheel is a lot more durable.

It is available in black and red colors.

The new engine of the CD 70 2023 model is better making the performance of the bike a lot more efficient. The wheels have also been redesigned with thicker spokes for better stability and the rear wheel is more durable than before. Its engine is durable and comes with a 3-year warranty in case there is any issue after purchase.

The CD 70 Motorcycle has an impressive mileage of 70 km/l (company claimed) which is suitable for daily use. It comes with a fuel capacity of 8.5 liters and reserves 1 liter of petrol.

The Honda CD 70 bike always has had a high resale value in the Pakistani market and similar is the case with CD 70 2023 model. If it has been kept in a good condition, it can be resold instantly and at a great price.

Honda CD 70 had no competitors when it had been initially launched back in 1984 but now the Pakistani market has been saturated with several companies introducing their own versions of CD 70. These competitors include United US70, Super Power SP 70, Road Prince Classic 70.

Only due to these competitors Honda CD 70 price has relatively been under control, otherwise, it would have sky-rocketed much sooner. For instance, the price of CD 70 back in 2005 was around PKR 54,000 and it stayed around the PKR 63,000 mark until 2017, only after which the bike prices have soared recently.

The United US70 shares similar features with the Honda CD 70. They both have the same fuel capacity and similar mileage. Their performance is also identical which makes US70 a strong competitor.

On the other hand, Road Prince Classic 70cc comes with a larger fuel tank with a fuel capacity of 11 liters but its mileage is 65 km/l which is less than that of CD 70.

END_OF_DOCUMENT_TOKEN_TO_BE_REPLACED 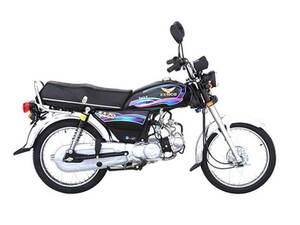 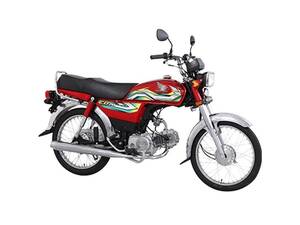 It's good bike for slow riders those who want to go till 100kmph It is nice than people think I also owned 125cc It is enough good to compared with 100cc I love this bike because it is bett...

What is the engine displacement of Honda CD 70?

The engine displacement of Honda CD 70 is 72cc

What is the fuel tank capacity of Honda CD 70?

Which bikes are similar to Honda CD 70?

What is the mileage/fuel average of Honda CD 70?

What is the overall rating of Honda CD 70?

END_OF_DOCUMENT_TOKEN_TO_BE_REPLACED 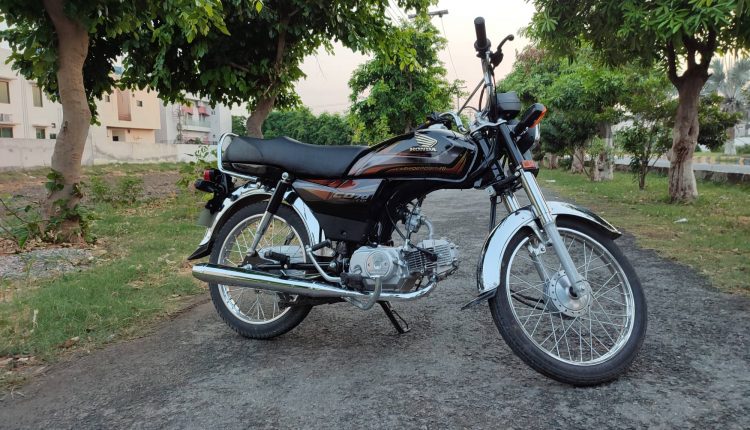 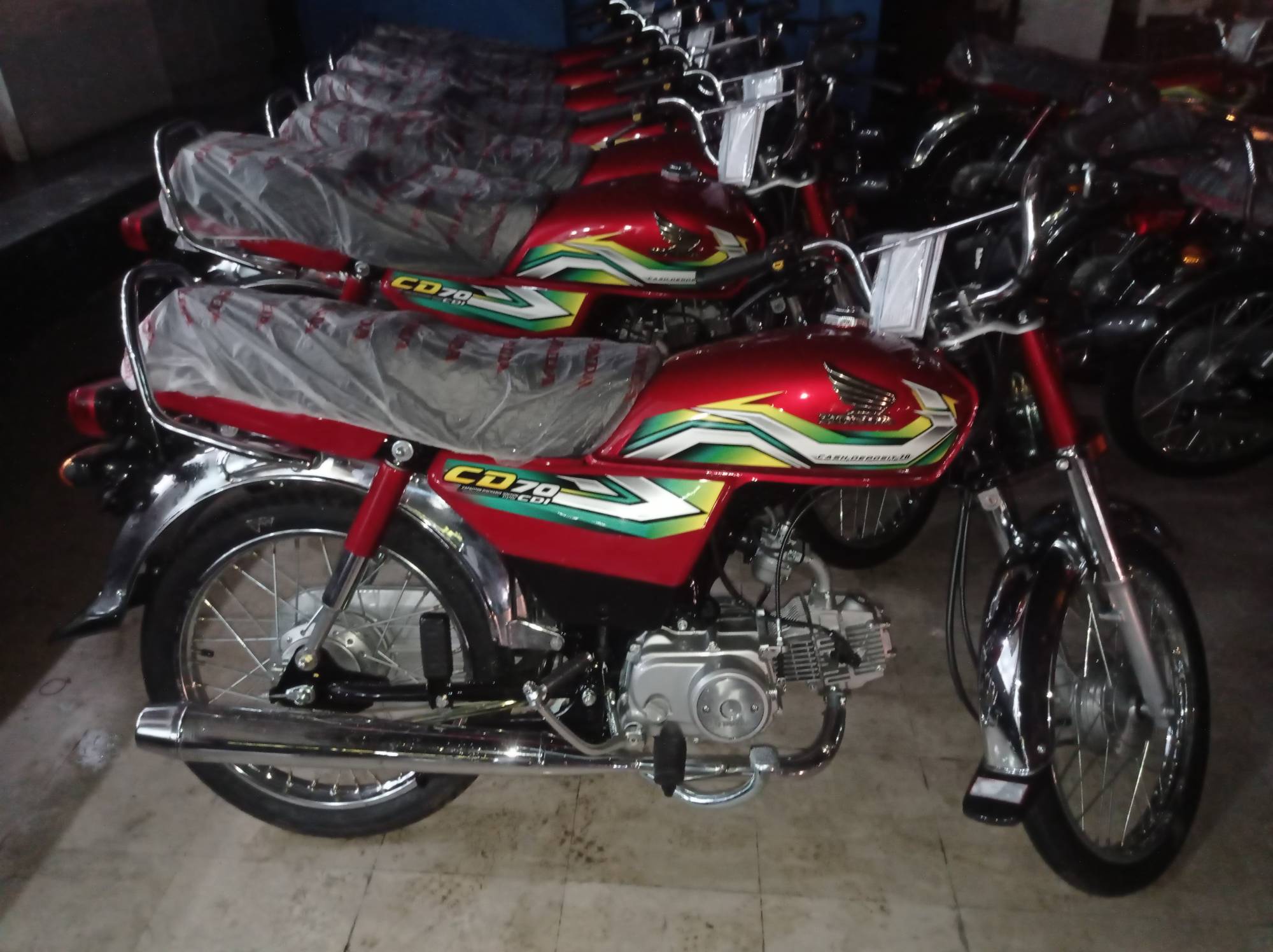 The annual wait is over as the new model of Honda CD 70 is finally here, and the company has introduced a huge upgrade in it. Before talking about this year's model, let us remind you about the last year's model, which was introduced with 101 changes. Those changes included new stickers, environment-friendly seating, and a high-performance engine. Furthermore, Atlas Honda gave a new clutch assembly, low friction piston design, Better Clutch Friction, Environment-Friendly Seat Base, Low Friction Piston Design, and Hard Chrome Coating Oil Ring. You can read about these changes in detail here.  Upgrade in New Bike And now it's time to share the massive upgrade in the 2023 model. Are you ready? Fasten your seatbelts or, in this case, hold the bike's handle tightly because this will blow your mind. So, the huge change is, OK, wait, let us take a deep breath because it is such a huge news that it is not easy to share; you know, the bigger the news, the faster the heartbeat. OK! a deep breath, are you ready? Here it is, but before that, if you are standing, please sit down before reading this, and if you are sitting, then lay down, please. So, the huge upgrade in the new Honda CD 70 2023 is... Drum Roll, Please...… THE NEW STICKER!!! Yes, you read that right, Atlas Honda has given a whole new sticker in the latest model, can you believe it? Like, a proper new sticker on both the fuel tank and side cover. Wow, just wow, it is truly unbelievable; like how can this be done in a mere bike that we get a new sticker? It is hard to digest, right? Yes, we think so too. So, the design change in the sticker is that it is greener, with a bit of white and a couple of lines with a pointy design. The biggest design change is on the side cover, where there is a clearly new line, which makes the new bike totally different from the older model. Here are the pictures of Honda CD 70 2023: [gallery bgs_gallery_type="slider" ids="167618,167620,167623,167625,167627,167629,167631"] Honda CD 70 Price in Pakistan  The current Honda CD 70 price in Pakistan is Rs. 116,500. However, as per our sources, some dealerships are demanding Rs. 119,500 for the new model. And it is pertinent to mention that the company has repeatedly increased the price of this bike without giving any solid reason. What do you think about Honda CD 70 2023? Do you think the upgrade is huge? Please share your thoughts in the comments section. Today we are here with a PakWheeler, Asad, who recently switched from Honda 125 to Honda CD 70. In this review, he tells us why you should also make this switch! Introduction Asad claims that the Honda CD 70 is a Qaumi sawaari. It consumes a lot less petrol than the honda CG 125 bike. Due to the hike in petrol prices, Asad believes it is the need of the hour to switch to a bike with less fuel consumption. Asad claims that switching to CD 70 has cut his fuel expenses in half. Ride & Handling Asad is pleased with the handling of the CD 70. It is lightweight, easy to handle, and smooth to ride. The bike can smoothly cruise through heavy traffic as it easily crams through any crevice.  Due to its lightweight, Asad is also able to move the bike around even when it is off, making it easier for him to get through difficult spaces.  Mileage The fuel economy of the Honda CD 70 is exceptional! Asad claims he got the tank full once since he got the bike and hasn’t refilled it yet. On average, the bike gives a mileage of 60-65 km/l. He got the tank full for Rs. 1900, which seems like a treat in this time of inflation.  Compared to the Honda CG 125, this bike provides a better fuel economy, saving him lots of money. Maintenance The Honda CD 70 requires minimal maintenance. The bike does not need to go to the workshop frequently, and one detailed visit can last for over 2 months. The maximum cost of maintenance is Rs. 1000 for this bike. Usually, an oil change costs Rs. 550, tuning costs Rs. 150, and other expenses are even less than these. Price Asad got this bike in used condition from a relative. He got it for Rs. 78,000 while the price of the newest Honda CD 70 is around Rs. 1 lac. Verdict Asad is happy with this switch but believes that it’s about time Honda added some essential features to the CD 70, such as fuel indicator, gear indicator, etc. Other than that, the bike is perfect for the daily commute! Watch the detailed review here: https://www.youtube.com/watch?v=_ettmpNyUnE

Honda CD 70 for sale in Pakistan