The 2nd Generation Daihatsu Terios features a unique design language. The front end features sharp sleek side swept headlights, a rectangular shaped grille with a chrome accent, a large front bumper with a rectangular air intake and standard fog lights. The rear end features trapezium styled side swept taillights, the spare wheel and a small rear bumper. All variants of the Daihatsu Terios feature identical styling every aspect. The overall exterior of the Daihatsu Terios takes the general shape of a compact SUV. The styling is restrained and minimalistic.

The interior of the 2nd Generation Daihatsu Terios compromises the use of black plastic trim pieces. The front and rear seats are covered in fabric. Standard features include a trip computer, multifunction steering wheel, Stereo speaker system with CD and AUX input, a 12V power socket, air conditioning, cup holders, power steering, power lock doors and a tachometer. Options include climate control and leather upholstery. The overall interior of the 2nd Generation Daihatsu Terios is functional but not exactly spacious when considering its exterior dimensions, it also offers below par level of comfort and interior refinement.

The 2nd Generation Daihatsu Terios gives an average of 14 KM/L making for an estimated range of 700 KM from the compact SUVs 50 liter fuel tank.

Do you own a Daihatsu Terios

END_OF_DOCUMENT_TOKEN_TO_BE_REPLACED 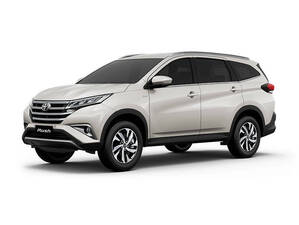 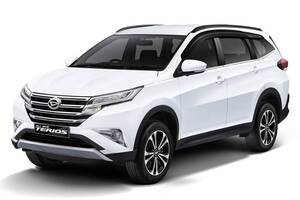 Daihatsu Terios for Sale in Pakistan