The exterior of the 3rd Generation Lexus LX Series features a very distinctive and aggressive design language. The front end houses large sharp side swept headlights, a very large hexagon grille with a chrome accent and daytime running light strips. The rear end houses sharp side swept taillights and a standard case power tailgate. The overall exterior of the 2007 Lexus LX Series features very aggressive and muscular styling that allows it to set itself apart from its rivals. Visually both variants of the Lexus LX Series are identical in every aspect.

The Lexus LX Series 3rd Generation can achieve an average of up to 8KM/L making for an estimated driving range of up to 765KM from the SUVs 95 Liter fuel tank.

The main competitors of the Lexus LX Series 2007 are the Toyota Land Cruiser, Range Rover, BMW X5 and the Jaguar F-Pace.

Do you own a Lexus LX Series

END_OF_DOCUMENT_TOKEN_TO_BE_REPLACED 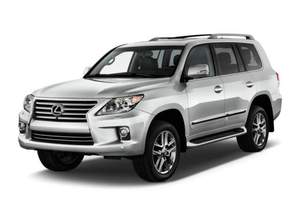