The 1st Generation Suzuki Liana featured a distinct styling appeal with a smooth, sleek front that features angular sharp headlights at the front fixed between a chrome stripe running across the black grille. The rear end of the Liana featured side swept triangular style taillights, a chrome bar running across the middle of the trunk that matches the chrome plated Suzuki logo and Liana badge. All variants of the 1st Generation Suzuki Liana Vurv feature identical styling in every aspect. The overall exterior of the Liana has a body sleek style that is up to par with modern design standards but it was not liked by the majority of Pakistan.

The interior of the Suzuki Liana Vurv 1st Generation compromised the use of light gray plastic trim pieces accented by silver plastic trim pieces on the center console and on the surrounds of the air vents, door handles, and power window controls. The seats are covered in a black-beige themed fabric. Standard features on the car include a 4 speaker stereo CD/Cassette player with AUX input, Tachometer, Tripmeter, Power Windows, Dual front airbags, Accessory socket, Air conditioning, Power steering, Keyless entry with an immobilizer. The overall interior of the Suzuki Liana Vurv features a good amount of interior space in both the front and rear for a sedan of its exterior dimensions. It also offers a good level of comfort and interior refinement.

The Suzuki Liana's 1st Generation gives an average of 11KM/L giving an estimated range of 550 miles from its 50-liter fuel tank.

I was searching for an automatic car for hefty traffic of Karachi. Unlike manual transmission car, choices were limited. Finally I got this one 2007 121 K used and I am thankful to God for this de...

Best decision ever made at least in pakistan

Hi guys Hope my this review will open the eyes of those sensible educated people who are destined to earn halal earnings and want a reward of their money I myself being abroad for a decade of m...

END_OF_DOCUMENT_TOKEN_TO_BE_REPLACED 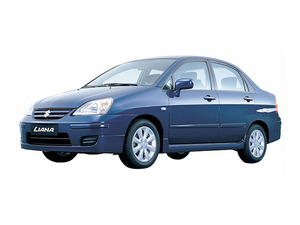 Suzuki Liana for Sale in Pakistan