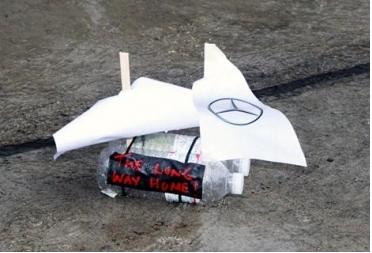 After the Friday clean sweep by RedBull, it was looking like RedBull will dominate again in the Saturday practice and qualifying sessions, but the weather was not in favor of them to have another clean sweep in the sessions. So, the practice session suffered serious disruption as apart from 2 drivers, no one was able to put a timed lap in full one-hour session. Here is the time sheet for the 3rd practice session.

After the disrupted practice session 3, and the likelihood of weather getting worse, there was fear of qualifying can be postponed but with the rules stating that qualifying can be delayed to at most 3-hours from the scheduled time or the darkness fall which ever happens first, the race director have to wait before deciding what to do; call off qualifying or go ahead in those treacherous conditions. Safety Car was send multiple times for checking the conditions around the track but with the puddles of water and rivers starting to become visible in different sections, it was quite hard even for the Safety Car driver Bernard Maylander, who on the last inspection had almost lost his car 3-times around the track before returning to the pits. A short while afterward FIA announced that Qualifying session is being postponed till early Sunday Morning. It will be the first time since season 2004 during the same Japanese GP; the qualifying session was canceled because of an approaching Typhoon, on Sunday in the qualifying where Michal took pole.

So what were the teams doing during the lengthy wait for qualifying to go ahead? Well different teams came up with different ideas, the most popular was to have a paper boat race which in about half an hour becomes an amateur model race with models ranging from simple paper boats to perfectly modeled Cruise Ship like Titanic. FIA officials were found having paper boats as well;

RedBull comes up with 2 models one for Webber and a remake of Robinson Crusoe’s raft;

The other Adrian Newey dream Yacht for America Cup;

Lotus comes up with a boat from tin cans

While Lotus’s driver Heikki designs his own boat with cardboard which drowned;

Mercedes comes up with a boat from plastic bottles and paper;

Sauber’s come up with the best design for a ship with their SS Sauber;

Virgin team was not interested in racing boats instead they thought playing poker in front of their garages will be a better idea;