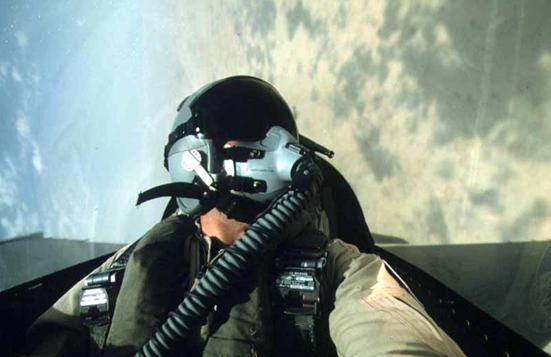 Being A Fighter Pilot

Fighter pilots are the last remaining example of military gladiators on earth. Who are always at war while flying their supersonic jets thousands of feet above the clouds. With their eyes on the radar scope and their reflexes beefed up most of the time, it takes some serious guts to be one.

Unlike commercial Airline pilots who enjoy the comfort of their flight with a cup of coffee and gorgeous stewardesses greeting them time to time, Combat pilots experience something totally opposite, a total bore and a torturing flight which at times is interrupted by seconds of sheer terror may it be caused by an engaging enemy or a technical malfunctioning at speeds exceeding Mach 1.

Combat pilots are the workhorse of any front line fighting force. Without them, today’s war cannot be won or cannot be fought to be precise. These brave souls up there, face one of the most deadly and challenging scenarios, may it be engaging an opponent in a dog fight or figuring out ways to save their aircraft in an event of attack. One cannot describe what goes on inside a pilot’s gut when he sees a missile getting airborne towards his jet. All he has now is his control stick and his revolving head inside the canopy with countless memories and notations suggesting different myths about the outcome of the battle.

Fighter pilots are the role model of courage, fitness and extreme readiness. They are not afraid of anything other then crashing which obviously leaves very little chance of their survival. From close air support to strategic attack, meddle assessment to reconnaissance, fighter pilots have proved over the years that they even cannot only perform every task but are the finest and most polished form of individuals who obey all the laws of discipline and tactics.