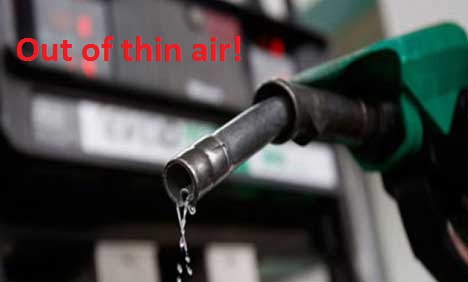 British engineers claim to have made petrol from air and electricity

U.S. Navy began to work on seawater to produce jet fuel for its air crafts, and now British engineers have claimed to have produced petrol from air and electricity but we call on for out of the box ideas and than make fun of them.

The company, Air Fuel Synthesis, have said that they have produced five liters of petrol over the last 3 months, the process of which is directly quoted from the British newspaper, Telegraph.

The “petrol from air” technology involves taking sodium hydroxide and mixing it with carbon dioxide before “electrolysing” the sodium carbonate that it produces to form pure carbon dioxide. Hydrogen is then produced by electrolysing water vapour captured with a dehumidifier.

The company, Air Fuel Synthesis, then uses the carbon dioxide and hydrogen to produce methanol which in turn is passed through a gasoline fuel reactor, creating petrol.

Although British scientists say that it is too good to be true, but the ‘Air capture technology’ has the backing Britain’s Institution of Mechanical Engineers and is funded 1.1 million pounds by unnamed philanthropists who believe in the theory and can be a game-changer while they have yet to gain attention from oil companies.

Many are yet skeptical of the idea despite the company’s plan to be able to produce a ton of petrol out of nearly nothing in period of few years.

Rupees 260 million worth of pedestrian bridges are most likely to go to waste: Official