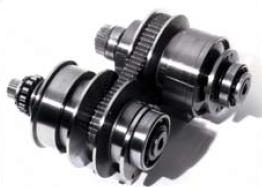 A continuously variable transmission is a type of automatic gearbox that has no gears. It was first used in 1886. Most of us are more likely to have encountered it in applications such as ride-on lawn mowers or one of the current generations of ‘twist-and-go’ scooters. It provides two obvious benefits: smooth, completely step less gear changing and fuel efficiency similar to (or better than) that of a manual transmission.

Some say you can’t teach an old dog new tricks. But the continuously variable transmission (CVT) is now replacing planetary automatic transmissions in some automobiles. This is one old dog that has definitely learned a few new tricks. Rather than having a fixed set of gear combinations, or “ratios”, the CVT transmission allows an almost limitless number of engine speed to vehicle speed ratios. This provides significant benefits over a traditional automatic transmission.

There are different types of CVT but they operate on the same basic principle. The idea is similar to that of a multi-geared bicycle in which the chain can move from large to small gearwheels at the front (driven by your legs on your bike) and at the back (where they drive the rear wheel).

This variability allows the cyclist to keep pedaling at the same speed while the bike goes faster or slower and makes it easier to climb hills. Similarly, a car engine with CVT can maintain its optimum operating speed regardless of the vehicle’s road speed, so maximizing its efficiency.

But unlike a bicycle, where the chain jumps between large and small gearwheels as you change gear, with CVT it stays constantly connected to the same gearwheels at the front and rear. However these can effectively grow bigger or shrink. This is possible because they are not actually gearwheels like on a bike but pulleys formed by two
opposed cones with their narrow ends touching, effectively forming a “valley” in which the chain runs.

Unlike traditional multi-speed automatic transmissions, the CVT is an “infinite speed” unit with no perceptible shifting. During maximum acceleration, the drive ratio adjusts to maintain peak engine horsepower. At a constant vehicle speed, the CVT maintains just enough engine power for economical cruising.

Continuously variable transmissions are becoming more popular for good reason. They boast several advantages that make them appealing both to drivers and to environmentalists.

Going in a bit more detail, we have made a comparative analysis between features and benefits of CVT. Let’s have a look.

Primarily, CVT was praised because it combined both fuel economy and smooth ride very successfully. A continuously variable transmission serves the same function as a traditional transmission. The difference, however, is that an indiscrete range of outputs is produced. When CVT was introduced, its purpose was to get rid of the gears. So CVT in a way means No More Gears. CVT transmissions have been refined over the years and are much improved from their origins.Today, several car manufacturers,
including General Motors, Audi, Honda and Nissan, are designing their drive trains around CVTs.