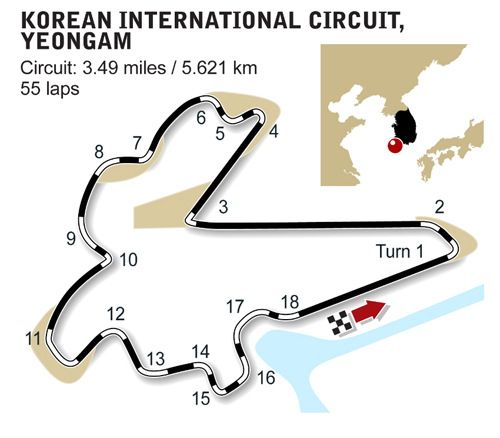 F1 has finally arrived in South Korea for its inaugural GP after a long confusion of the track that it may not be ready on time but the track was ready on time to host the GP. FIA played its part in making this possible as they violated their own rule of giving certificate of safety after delaying the inspection to almost 2 weeks before the race had been scheduled. While according to rules, no track can be certified for F1 race if the track is not complete for inspection 2 months before the scheduled race, lets see after this precedence has set what happened, if another track in the future will suffer the same problems would that also get the delayed inspection or its only one time rule breaking, but that’s a debate for some other time. The track is unique as it is the first time in the history of F1 that a track is being designed first and then a city will be built around it, as the South Korean planners are building a new city in that area of Yeongam where the new track have been built.

It is also the first track which is part race track and part street circuit, and been designed by famous F1 Track designer Hermann Tilke. The track features 3 long straights, with a tight twisty part, the sector 1 completely consists of long straights with the longest between turn 2 and 3 with over a Km long, Sector 2 and 3 are mostly twisty section, overall this track has 18 turns and a total length of 5.621 Km. The race will consist of 55 laps. Because of the newly laid tarmac, there are concerns of low tire grip which could result in 2 or 3 stops strategy and with the walls so close to the track Safety Car sessions because of some one spins into the wall are highly likely.

The track has every kind of corner which suits to all top 3 teams and the 5 title contenders with the Sector 1, where McLaren drivers have advantage because of the F-duct while turn 2 and turn 3 could play in the hands of RedBull’s and Ferrari’s drivers. All the top 3 teams have brought some upgrades for the race, McLaren have brought a double F-duct, while Ferrari have brought a new floor, blown diffuser and enhanced F-duct apart from new engine mapping and RedBull has brought its upgraded F-duct. Because of the closeness of the championship, it is the last chance for McLaren to cut the lead significantly or they will be out of the championship while RedBull wants to increase the lead especially Webber who is leading the championship table and Ferrari is hoping for a trouble free race to remain in the hunt as Alonso is on his 8th engine and an engine failure means he not only suffers a 10th place grid penalty but also his title hopes will be gone. The weather prediction for the race, rain is expected while qualifying will be held under clear skies.

In the first practice session, the track was not only quite dusty but also the grip level was low as expected. Heikki Kovalainen’s Lotus was the first car came out on the track but Jaime Alguersuari’s STR posted the first timed lap with a time of 2min20.611s. But as the session progressed times started to come down as Sakon Yamamoto, Michal Schumacher, Sebastian Buemi, Mark Webber, Nico Hulkenberg, Sebastian Vettel, Jenson Button and Nico Rosberg all take the top spot by beating the previous best times by others. Later Hamilton posted the best time of the session which remained till the end. Despite the slippery surface and walls close to the track with minimum runoffs no one crashed, although many drivers made mistakes at the first turn as they missed braking zones quite a few times. Bruno Senna was the only major incident when he spun at turn 9 after a broken suspension but does not make contact the wall either. Jarno Trulli’s Lotus suffers some gearbox issue and misses most part of the first session. Hamilton posted the best lap of the session with the time 1:40.887 with Kubica 2nd just 0.081secs behind and Rosberg 3rd 0.265secs behind.

Second session of the day, saw the increase of grip level, as the times comes down to almost 3 secs on the best lap between the first and second session. This session was more eventful as the first red flag of the weekend also occured in this session when Yamamoto’s HRT brushed the wall and stopped in the middle of track blocking the track, while his team mate Senna only did 3 laps because of the problem he suffered in the first session. This session sees return of RedBull to the top spot as the championship leader Webber takes the top spot. Ferrari also shows better pace then they have shown in the first session while McLaren and Renault also show good pace. Both the RedBull drivers have some moments. First Vettel trying to overtake Trulli’s Lotus goes off the track but then put the best time of the session at that point then Webber spins at turn 12 before posting the best lap on the next lap. Button’s McLaren need some attention as he returns with smoke coming from the rear of the car which was extinguished by the McLaren pit crew. In the end Webber takes the top spot with a time of 1:37.942secs, with Alonso 0.190 secs behind on 2nd and Hamilton on 3rd with 0.337 secs behind.