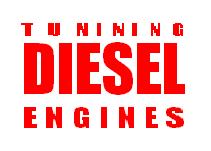 It’s really a fun experience for me when someone has a little tough time starting his diesel vehicle goes to a supposedly well reputed diesel mechanic with his complaint. The mechanic very promptly says that your engine is dead and needs a rebuild just by checking blow-by.

Our “bechara” guy gives in and dishes out money to get his odd noisy steed fixed and results in same old performance behavior even after the build.

The diagnoses for diesels are;

The most baffling part is how the guy can just blurt out a dead engine at about 100,000 kms (diesels will go for 500,000 kms before rebuilds). You may have blow-by even with bad valve clearances in an NA diesel as your cylinders are not being filled with air fully and you are burning more fuel than air – resulting in black smoke and blow-by because its compression behind the rings that force them to sit tightly against the cylinder wall, with less air you don’t have a strong enough compression factor. This blow-by may also be due to retarded injection timing – the pressure buildup at TDC is delayed causing weak ring seal against the cylinder wall – which you then see as blow-by

Low compression is a dead giveaway of an engine rebuild – but very rarely would you see it required if maintenance is done according to the points above.