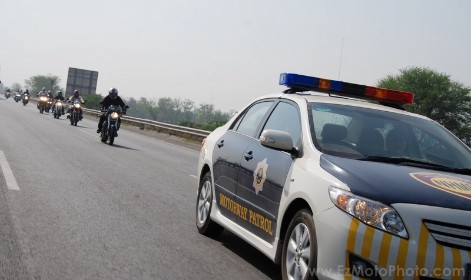 Two wheelers on the motorway

On the 23rd of March 2010 motorway stakeholders embraced the biker community of Pakistan. Lahore Bikers Club hosted the first, official, bike rally of Pakistan in collaboration with the National Highway and Motorway Police. The Ravi toll plaza was a spectacle for the media, and our politicians weren’t too far behind either, though they were fashionably late.

Earlier that morning, LBC gathered at Mr. Maqsood’s (co-founder LBC) showroom, Redline. Some had waited for this moment since the day the Motorway project began, so early than planned show up was always expected from this bunch of enthusiasts. Taking a moment to reflect this day as one of the important ones for the Pakistan biking community, LBC indulged itself to the pleasures of photography and movie making. But the thirst for the open road was too much to bear and all rode their steeds to the Ravi toll plaza, to face the winds and to declare to it “mellow down, for the knights of the roads are here”.

At the toll as we waited for the ceremony to finish and our turn for glory to start, I couldn’t help but recall where this all began. A very humble and down to earth man, Prof. Masood, who taught at U.E.T., sowed the seed of motorcycling in the hearts of many. Some relate to him as the person who would go out of his way and help foreign travellers by offering technical/ mechanical help, or food or even a place to stay. Many mentioned him in their international forums or web sites and even in books. Others were more fortunate to remember him as their friend and fellow biker. His death was a great lose to our community, although people now have moved on to different mad biker clubs, thanks to him the love and brotherhood is still there in every biker’s heart.

Another member worthy of recognition is Mr. Malik Fayyaz, co-founder LBC. His countless calls and trips to the NH&MP Islamabad, his endless ways of trying to shake up all his contacts in Islamabad for the cause and his undying will to do more for the biking community in future, is a testimony to the will and courage of Pakistan. Even the President of LBC, Mr. Burhan, credits this man for this day. And we, the bikers, will forever be indebted for his efforts. His efforts landed us on the motorway training institute in Sheikhupura on the 19th March 2010.

Time passed rather quickly that day, time passes rather quickly every time on the motorway. Friday, 19th March 2010, the pre run to the rally. The day LBC had to be at their best, the day inspector Saqib of the NH&MP would grace the club with a 3 hour tutorial of how to ride on a motorway. On another occasion it came to be that this would be the norm for any biker trying to get a pass to ride the M1, M2 or M3. Documents thoroughly checked; driver’s license, bike registration, CNIC Xeroxed and bikes inspected to its bones. Cautious but optimistically the Motorway police gave the green light. It was surreal.

And it Still is!