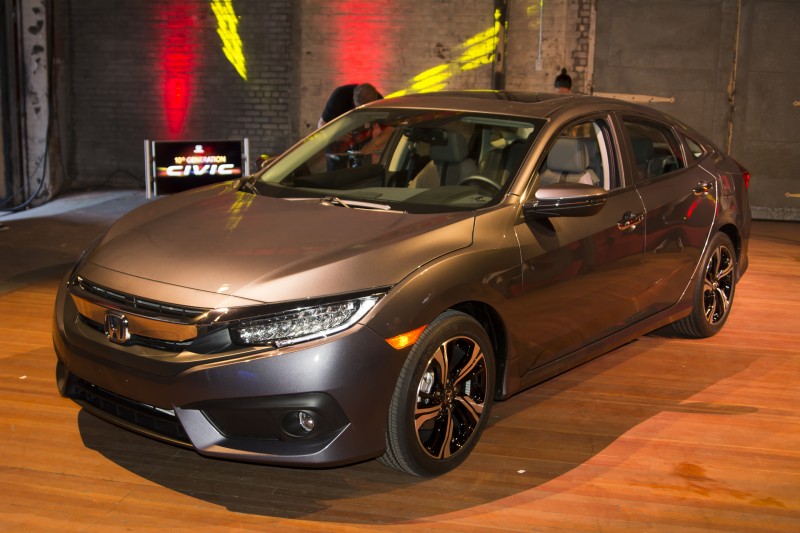 So the most awaited moment is here. The day everyone was looking forward to. Honda has officially released details on the world debut of the 10th generation Honda Civic at an exclusive event in Los Angeles USA. Honda event was full of lights & dance along with a live performance by famous music band “Night Riots” and it was streamed live on YouTube.

I had an opportunity to view the live stream as being on East Coast it was  just after dinner for me and I watched it as a delicious desert.

For the launch video of the 10th gen Honda Civic, click here. 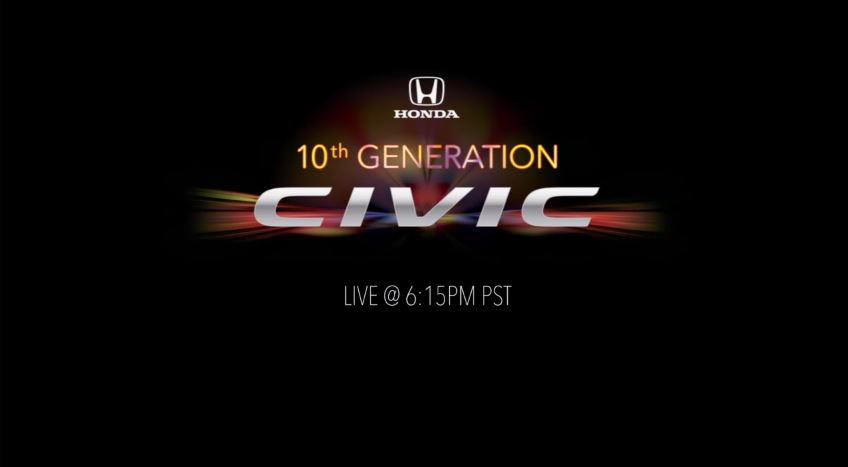 2016 Honda Civic was designed and produced by Honda LA design studio. This is the first time a Civic was designed outside Japan. The new car will be wider and lower and on Honda’s new global platform. Much quieter and smoother on road than previous generations. Compared to the current model, the 2016 Honda Civic Sedan is nearly 2 inches wider and 1 inch lower with a 1.2-inch longer wheelbase. First in compact class vehicles, LED headlights and tail lights are introduced for the first time. According to Honda, they wanted to give new generation a new bolder and dynamic styling with sporty proportions altogether; ‘It’s Civic Re-Imagined‘. As per press brief the new Civic will be initially available as sedan and later coupe while a SI sedan and Type R models will follow later.

At launch two engine options for US market will be available. A 2.0L naturally aspirated, VTEC 4 cylinder as well as first time a turbocharged 1.5L engine. A CVT transmission will be standard. As per Honda press release Civic Sedans in EX-T, EX-L trims and Touring trims will be powered by a 1.5-liter direct-injected turbocharged 16-valve DOHC inline-4 with power output of 173hp, mated with newly designed CVT while LX and EX trims will be powered by a 2.0-liter, 16-valve, DOHC i-VTEC 4-cylinder engine with power output of 158hp; which as per Honda is the most powerful base engine ever offered in a Civic. The 2.0L engine will be offered with either a 6-speed manual (LX trim) or continuously variable automatic transmission (CVT).

The 2016 Honda Civic Sedan will have tons of new safety features based on Honda’s Sensing suite of advanced safety and driver-assistive technologies, including Collision Mitigation Braking, Road Departure Mitigation and, for the first time in a Honda, Adaptive Cruise Control with Low-Speed Follow.

The interior is brand new for Civic line up. As we mentioned in our previous blogs; the split level cluster is no more but a new sporty TFT digital cluster will be available. A 7″ touch screen Apple Carplay/Android Auto is introduced with iOS or Play Store compatibility. Overall new Civic will truly inspire the Honda lovers due to its impressive exterior and interior design and features. John Mendel, Executive Vice president of American Honda Motor Co, Inc said :

“This tenth-generation Civic is quite simply the most ambitious remake of Civic we’ve ever done. We are bringing more new technology and innovative thinking to Civic than ever before to establish a new benchmark for fun-to-drive performance, fuel efficiency, safety performance and refinement in the compact class.”

For now please have a look at the new Civic. We will share more details as it gets available. No information on price as of now but expected to remain same as 9th generation Civic in USA. Click through the gallery for all the photos, below.