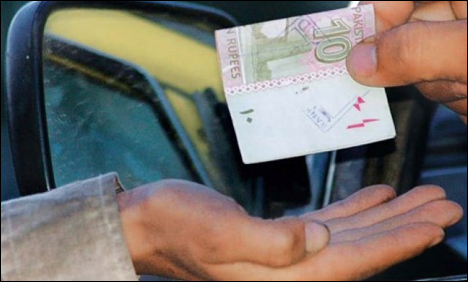 Should we give alms to street beggars?!

Recently, I was traveling with my mother and at a traffic junction, a child beggar kept knocking at my window. He was a boy about 6 years old to whom I gave him a 5 Rs coin on the repeated insistence of my mother, he replied with a harsh and loud tone, “Bus?!?”. He took the coin, gave me a look of anger and went away to the next car, making me think whether they’re deserving or not since we should give whatever we can afford to, whether the amount is huge or petty, right?!

The amount of beggars on streets has grown tremendously over the last few years. There’s hardly a traffic signal left where you won’t come across them. While this is more of a social and national issue than related to Cars/Bikes, and it is the responsibility of the government to address this issue, I feel that we motorists are the ones exposed to them the most, and if we want a change, it must come from us; hence my purpose of writing this article.

While we give them money thinking we are helping them and the community at large, actually, I believe the effect is the opposite. These beggars are organized more than we can think. They are more actors than needy person who employ different tactics to mint money from the public. They are run by mafia-like gangs. There are auctions for each traffic junction and rates vary according to the volume of traffic passing through. Anyways, the purpose of this article is to encourage people to why not to give money to most of them. So shall we hear me out?!

These are the most potent weapon of the Beggar mafia, not many people can resist when children come up to them and ask for some change. Yet we should not give them money, because the money we give to them will only act as a catalyst that will lead them to being beggars forever. Do we really want this? At this age they should be in school learning ABC and maths, not scouting for people to approach when Red traffic light appears. The money you give them will only be used by their parents or the mafia handler assigned to them,so is it really for their good? Will this money be used to buy them clean clothes? Or give them a nutritious meal? Sadly not. Therefore the slight chance we have of helping them is to not give them money and encourage them in this act, converting this mere profession into a habit. Here I urge the government as well to send these children to schools and provide them with a normal childhood which they truly deserve. If we really want to help them on that moment, we can give them something to eat/drink on most instances is rejected or simply thrown away by them, try it if you don’t believe me.

Next in line is this segment of the beggar community. Most are physically normal and healthy, some have infants with them, others are holding placards describing their misfortune and asking for our money. The majority of them come and ask money as if they are doing a favor on us! It makes me wonder; can’t these women work in homes with dignity? There is an acute shortage of household staff these days. It is normal now for “Safai wali” to visit a home for 2-3 hours a day and get paid 4000 Rs or so for her services. Then there is a maid who has to attend to the children, a cook, and so on so forth. Actually there is a shortage of household workers these days. Why don’t they go work there? Why do they rely on begging only? Giving money to them is not justified at all.

Just as the women, there are healthy men on the streets as well. Some have windscreen wipers who come and start scrubbing at your windscreen, forcing a person to pay them money. While I do agree the level of unemployment is high in our country, still giving charity to them equates to increasing the sale of drugs/narcotics because an overwhelming majority of them are drug users and use this money to finance their addiction.

Commonly referred to as “Khusray”, they are also involved in this trade. Many people have a misconception that if they do not give them money these eunuchs will curse them or give them “Bad-Dua” and after that misfortune/disaster will strike them. This is not true at all. For starters, they are really not even eunuchs by definition. About 99% of them are biologically male, just wearing female attire to grab our attention as cast-outs of our society. And if their cursing power was so strong, I wouldn’t be alive today writing for this blog. They should not be given money as well. They are healthy males who should look to other ways to earn their livelihood.

Well this is the only section of them which according to my personal opinion does somewhat qualify for giving alms, although the government should take steps to accommodate and rehabilitate them as a productive member of society.

Summing up, even if we think that our intentions are clear and good when helping these people, in actual we are funding this menace. If we want to help our society, we should start with our relatives and people near our locality that need financial assistance and are truly deserving. This is also in accordance with our religion that instructs us to help our family/relatives first before moving on to others. Our Government should also look at this issue seriously and devise a strategy to get these people off the streets, and from the clutches of beggar mafia and incorporate these people as respectable and contributing members of our society.

Man turns a Lamborghini Gallardo into a Mustang