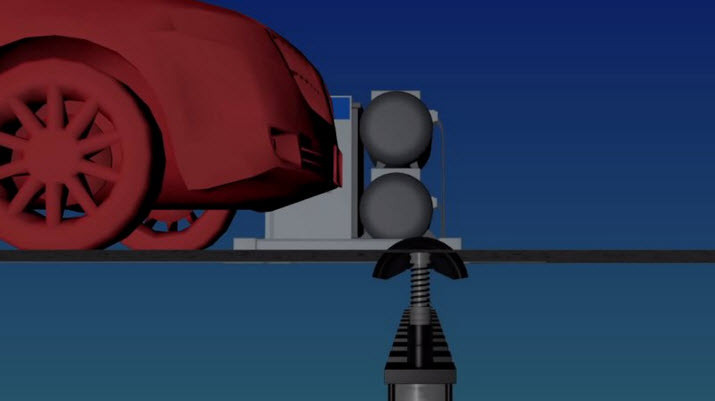 University of Illinois at Chicago and New Energy Innovations are partnering on company’s new project: Traffic Powered Renewable Energy System (TPRES). In a more understanding way you can just say that this system uses passing traffic to create electrical energy. Yes it’s true! It will be deployed at intersections, toll booths, entrance and exit ramps, etc.

Energy can never be created nor be destroyed only transformed from one form to another –By Albert Einstein, while keeping in mind this concept, we are already using Diesel/Gas gen-sets to produce electricity in which we are actually converting mechanical energy into electrical and if we go for eco-friendly generation we are using solar panels and windmills.

In the same way, TPRES uses cylinders inside cartridges (just like the PISTON) installed in the roadway, which compress air when cars drive over them. The compressed air will play a key role, like a a kind of fuel, which will go to the air compressor tank. Through the tank it will be pressurized to the air motor connected to alternator to produce electricity, which will be stored in the batteries for immediate or later use. This is how TPRES takes motion energy from vehicle tires and uses pistons to convert it into mechanical energy and then convert it into electrical energy via a generator.

Watch the video below to better understand how the system works:

It’s an eco-friendly and cost effective way of generating electricity, as we are well aware that our planet is continuously facing harsh environment conditions each day, like our ozone layer is damaging, global warming is increasing and generation of electricity by using high carbon fuels play major role in damaging our greenhouse gases. Now coming back to the point, vehicles already pass over bumps in the road every day and nobody benefits from it, so I think it’s a positive initiative which will give good results and everyone will benefit from it, especially in Pakistan as we are already facing a major energy crisis.

Let us know on your thoughts in the comments section below.

Inside the heart I am Tech Guy and my love for technology can't be expressed, especially when we are talking about automobiles which are a perfect example of spice in technology either we go for mechanical or electronics side of new generation vehicles.