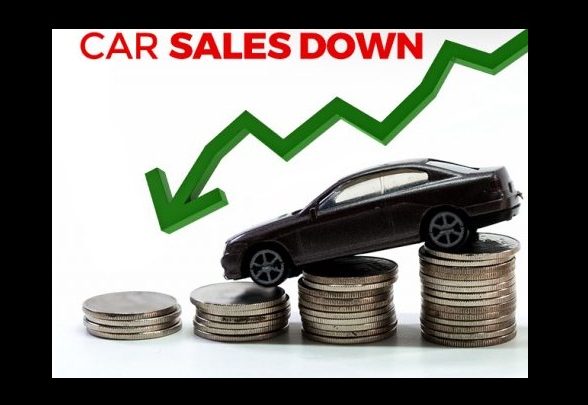 Pakistan Automotive Manufacturers Association (PAMA) has published the auto sales stats for the month of September 2019, and a drop of around 35% and 23% in the sales of cars and motorbikes are observed respectively.

The downtrend in the sales of automobiles in Pakistan continued for the month of September as well. The first quarter of the current fiscal year also comes to an end, and the car sales record a decline of more than 39% in the first three months as compared to its corresponding period last year. Similarly, motorbike sales were also down by around 17% in the 1st quarter of FY 2019-20. Overall, the auto sector is going through tough times for the last six months or so. It all started with the sharp depreciation of Pakistani Rupee against the US dollar, which forced the auto manufacturers to revise their prices multiple times. After a year of the devaluation of the local currency, the car prices now stand at nearly 30% more than they were 12 months ago. This particular condition of the domestic auto sector is also contributed by the additional taxes and duties imposed by the government. In the first quarter of the ongoing fiscal year, as many as 31,017 cars were sold as compared to 51,221 units in the corresponding period last year. The current fiscal year did not start too ideally for the local automakers as they have so far only struggled to sell their vehicles standing at record high prices. Even the local motorbike and 3-wheeler manufacturing companies managed to sell 356,757 units in the first three months, starting from July 2019 and ending September 2019. In comparison, there were as many as 432,733 units sold in the same period during 2018, which is more than 17% higher than this year. Note here that all the stats mentioned in this article are taken from the sales stats published by PAMA on their website.

The sales stats for the passenger cars of 1300 cc and above engine capacity reveal that Honda Atlas has been most affected by the current economic slowdown process in the country. The Japanese auto giant recorded around 67% plunge in sales of its Honda Civic and City model. It is being followed by Suzuki Swift, for which a drop of 59% was observed in the first quarter of FY 2019-20 as compared to its corresponding period last year. Toyota is the third on the list as it suffered by around 58% in its sales of the popular Corolla model.

Pak Suzuki, with both of its models in the 1000 cc category including Cultus and Wagon R, suffered a drop of 25% and 72% during the first three months. Overall, the company’s sales declined by more than 54% as it managed to sell 5766 units as compared to 12,718 units in the 1000 cc segment of cars.

Pak Suzuki’s recent launch of the 660 cc Alto has been the driving force of the company’s sales in this worst patch for the auto sector. The automaker achieved the highest number of sales for its Alto during the month of September 2019, as 4924 units were sold in this period. Suzuki Alto also saved the overall sales number of the auto manufacturer which had dropped massively due to a considerable dip in the sales of Wagon R. On the other hand, as many as 1106 units of Bolan were sold in the first quarter of the current fiscal year as compared to 3778 units last year showing a drop of more than 70%.

The overall passenger car sales dropped by 35% during the month of September 2019, whereas a decline of 39% is observed in the first quarter of the current fiscal year. The local auto manufacturers in the country sold 31,017 units in the first three months of FY 2019-20 as compared to 51,221 units in the corresponding period last year.

The local auto industry is comprised of three major car manufacturers, including Pak Suzuki, Toyota IMC, and Honda Atlas. Among these, Honda Atlas suffered the most in this period as its car sales declined by nearly 67% during the period under review. It was followed by Toyota Indus and Pak Suzuki, with approximately 56% and a 21% decline in sales. It also suggests that the trend of entry-level cars is on the rise, whereas the automakers producing high-end vehicles are struggling to sell their vehicles due to high prices. Let’s have a look at the individual stats for these significant car manufacturers in the country.

Pak Suzuki manufactures entry-level and mid-range hatchbacks in the country. For decades, it has been the only automaker in this segment, which is now joined by KIA that recently introduced its 1000 cc Picanto in the local sector. The buying power of the consumers has reduced considerably in recent times, which forced the consumers to look forward to small cars of Pak Suzuki. The company still struggled to sell its vehicles in this period. The automaker received a major blow from the sharp decline in sales of Wagon R that went down by 72% in the first quarter of the ongoing fiscal year. Suzuki Wagon R has continuously struggled with its sales ever since the introduction of the all-new 660cc Alto in the local sector. It also suggests that the customers have shifted towards the new entrant in the last few months. All the models of Pak Suzuki went into a plunge whereas Alto recorded the highest number of sales in a single month since its launch. The company sold 4924 units of Alto in September 2019, while a total of 12,943 units have so far been recorded in this first quarter of FY 2019-20. Apart from Alto, the company sold just 10,204 units among all its models, which show the strong response of the new hatchback in the local sector. Suzuki Cultus was the only other car that indicated resistance in a downtrend as it recorded a 25% decline in its sales. Pak Suzuki was least affected in the current situation of low demand in the market as its car sales went down by 21% in the 1st quarter of FY 2019-20. According to the September 2019 stats, Pak Suzuki holds around 70% market share in Pakistan, which was 51% during the same period in 2018.

Toyota Indus sales dropped by half:

Toyota Indus has also suffered quite badly in recent times as its sales declined by nearly 56% in the ongoing fiscal year. The sales of its top-selling Corolla also went down by 58% as the company only managed to sell just 5503 units in this period as compared to 13,196 units in the same period last year. Similarly, the sales of Fortuner and Hilux also went down by 56% and 42% during this period. The company is also forced to halt its production for the last three months due to low demand in the market and piled-up unsold inventories. The automaker has also introduced several limited-time offers on its Corolla variants to revive the sales. Toyota Indus turned out with an 18% market share as per the September 2019 stats. The company has lost a market share of 9% on year to year basis.

Honda Atlas turns out to be the top victim:

Honda Atlas Cars Pakistan Limited (HACPL) is majorly dependent on the sales of its sedan cars, i.e. Civic and City. The only other vehicle is the compact crossover SUV BR-V for which the sales are already down by 59% in this period. The sales of both the sedans of Honda Atlas are revealed together by the company. The PAMA stats show that the automaker sold only 3926 units of Civic and City during the current fiscal year as compared to a whopping 12,161 units in the same period last year. The total decline recorded in this period was 67%, which is by far the most for any auto manufacturer in the country. Honda Atlas has also been alongside Toyota Indus in shutting down its production plant for several days due to the high number of unsold inventories. Honda Atlas is left with only a 12% market share as per the September 2019 stats.

Sales of trucks & buses cut by nearly half:

The latest stats published by PAMA reveal that the sales of trucks have gone down by nearly 50% while the sales of buses dropped by approximately 26% during this period. The overall sales of this category declined by more than 46%, with a total of 1070 units sold in the country.

Like every other segment, the sales of light commercial cars, vans, and jeeps together dropped massively by 58% as well. Toyota Fortuner and Honda BR-V both recorded a respective 56% and 59% plunge in sales during the first quarter of the fiscal year 2019-20. On the other hand, Honda Atlas has introduced the facelift version of its compact SUV BR-V, and the company expects to revive its sales after this launch.

The sales stats for pickups in Pakistan are not too encouraging as its sales were collectively down by 48% in the local sector during the first three months of the current fiscal year. It was contributed by a drop of 56% in sales of Ravi, 42% in Hilux, and 32% in sales of JAC pickup. A total of 2824 units of these vehicles were sold in this period as compared to 5436 units during the same period last year.

The market share of Massey Ferguson tractors has dropped significantly during this fiscal year. It also faced a setback with a drop of 51% of its sales during the first quarter of FY 2019-20. On the other hand, Fiat has improved its sales considerably by 24% with as many as 4470 units sold during this period as compared to 3602 units in the same period last year. The overall sales, however, were down by 31% during the period under review.

Pakistan has been a popular market for 3-wheelers and particularly motorbikes. The major motorbike manufacturers in the country include Honda, Suzuki, Yamaha, Road Prince, and United. In the current economic crisis in the country, motorbikes are mainly used as a source of commuting by a large proportion of the population. Atlas Honda still leads with the highest market share in the local sector but couldn’t maintain its sales numbers during this period. Its sales went down by 11%. It was followed by the sales of United motorbikes with 81,012 units sold in this period, which were also down by 26%. The slightest decrease in sales was recorded by Yamaha as it sold 6212 units as compared to 6285 units, with a decrease of just 1.16%. The overall sales of motorbikes and 3-wheelers went down by 17% in the local market, which shows that the downtrend has continued.

The above-mentioned sales stats suggest that the local auto sector is in deep crisis due to the sky-rocketing prices of the automobiles. The additional duties and taxes on locally produced cars are another major reason for the downtrend. The government should offer tax relief to the companies operating in Pakistan to let the sector grow to its true potential.

Share your valuable opinion in the comments section below. Stay connected with PakWheels for more updates on the automobile industry.

PakWheels.com excites the people of Sialkot with its amazing Auto Show