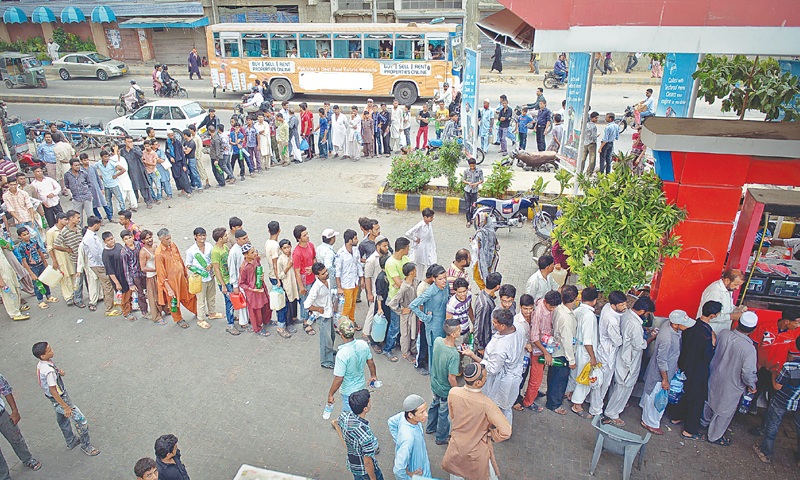 Our nation is having a lot of shortages lately. Natural gas, electricity, water, CNG and now, add to that list of never-ending miseries of Pakistanis: Petrol, as well.

Just as the problem stricken nation thought that things couldn’t get any worse, the government threw a petrol bomb on us. From the past few days, the queues have exceeded the CNG shortage era. And now people have to go through a lot of misery just to get a few liters of Petrol. Majority of pumps have closed down, or sell very little, almost negligent amount of fuel to the users, that too on high rates. But, this article is not written to discuss the reasons behind the shortages rather how it affects the lives of people.

Exhibit # 1: I went to office today. Luckily, a few days ago I got the tank of my Prius full and it just feels so good to own a Prius nowadays. So my car was unaffected by this shortfall, but the same didn’t apply to my office. I work in a government setup. People there already are looking for excuses not to come to work today, and this gave them the perfect background story. Majority of lower staff was; “Sir ji petrol hi ni”, (We have no petrol) and didn’t come even though today, a special external audit was going on. The result: I had to do the work for all of these people. I came home very late and my body was on the verge of disintegrating.

Exhibit # 2: A friend had his Mehndi today. He thought he would get petrol in 30 minutes or so after work as he didn’t get a leave but he was awfully, wrong. It took him roughly about 3 hours to get petrol in his car (the one which had to be used in the function), and it kind of distorted his special day plans and arrangement a bit.

Exhibit # 3: Another friend had to go to Islamabad to attend a function with his family. Well he couldn’t find petrol anywhere in his locality and his car barely made it to his own home before choking on the last drops on petrol, and now just imagine how the phupho would be feeling. Poor phupho.

The cars which have run out of petrol would face problems on their own. These are just the stories of the people I know personally, I fear problems for others can be worse than they were for me. Please do sure stories below so we can compile and bring to everyone’s attention that the government must take action on preemptive basis, rather acting after a tragedy or crisis has struck.

The Time Bomb on Wheels We Call Public Transport