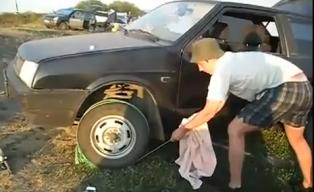 Are you bored of starting your car when the self or battery gives up on you? Don’t you just hate push-starting a car with a dead battery? But what if there was a cooler way to make the engine turn over than simply using jumper cables or brute force.

Because in Soviet Russia, you don’t push the car to start it – all you need is some Vodka, a rope and a jack to start you car.

The guy starts his car with just a rope and brute force. Oddly enough, this is a WIN, with the beat-up old Lada starting like a champ from the first tug of the rope. Genius! But will it work with a modern fuel-injected car with advanced electronics? Most likely not but this is a carbureted vehicle and from now on, keep a rope in your car if you’re stuck in some area where there is no help for pushing the car nearby.