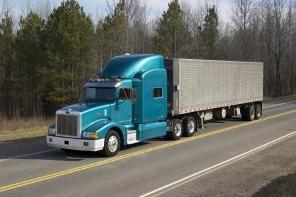 This Truck Transports Nukes Across USA

It is always said in the western media that Pakistani nuclear devices can fall into the hands of the extremists or put to evil use. Well, ever wondered how actually are these nukes transported from one place to another? Sadly for the extremists, I am not going to tell you how Pakistan transports her Nuke as we don’t know it yet, however, Friends of Earth recently used the freedom of information act to force the US Department of Energy to release color photos of the special trucks that transport nuclear weapons, nuclear weapons components and “special nuclear material” such as plutonium and highly enriched uranium.

This may look like just another 18 wheeler to you but this is the last truck that you’d want to mess with. These 18-wheelers are called “Safeguards Transporters”, the truck is basically the normal production modified to provide protection to the federal agents and the cargo trailer behind can remain engulfed in fire but won’t incur any damage to the cargo; the tractor-trailer is then accompanied with escort vehicles, and it’s a pretty filmy scene you know.

FoE forced the US Dept. of Energy to release color photos of the truck because they were unmarked and transporting nukes crossing various neighborhoods and that the people should know what is what.

A report in Kitsap Sun discloses that US military is “secretly” transporting 1,000 of the U.S. Navy’s 100-kiloton W76 nuclear warheads from a submarine base near Seattle to a plant in Texas. But worse news is that these are transported by an agency recently investigated for problems with alcohol abuse.

The report indicates as many as 1,000 of the approximately 30-year-old 100-kiloton W76 warheads are being transported from Naval Base Kitsap-Bangor near Seattle to the Pantex Plant in Amarillo, Texas, nearly 1,800 miles away, for updates that’ll extend the life of the weapon by 30 years.

If exploded, the W76 warheads, currently used as the main warhead for the Trident 1 and Trident II Submarine-launched missiles, are designed to create a fireball more than half-a-mile in diameter.

US Department of Energy’s National Nuclear Security Administration (NNSA) Office of Secure Transportation will carry out the transportation. Convoys of escorted unmarked trucks will carry these warheads on their journey.

According to NNSA, many safeguards are in place including bullet-proof sleeper areas in all the trucks and a requirement that agents don’t go for more than 32 hours without 8 hours of “stationary bed rest.”

Here’s a report released couple of weeks ago by US Dept. of Energy investigators (Report PDF) stating that the agents within the Office of Secure Transportation had a bad habit of getting drunk.

But the revelation about transportation follows the release of a report two weeks ago by Department of Energy investigators (Report PDF) announcing that agents within the Office of Secure Transportation had a bad habit of getting drunk while on the job.

Back in 2007, British Military vehicle carrying nuclear warheads got lost on way from Scotland to Reading, then agents of US with a drinking habit are transporting nukes, and then both the Countries are worried that a country not even known for running their trains on time could loose them into the hands of extremists kind of makes me wonder; if we can know the secrets with such ease, infact lets just hope that the terrorists don’t use internet for their research.

How Self Inflating Tires Work