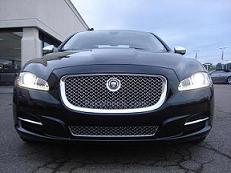 Got a chance to take the new Jag XJ L for a test drive recently and absolutely loved it. The car I drove was obviously the long wheelbase version. I think the LWB actually looks better than the SWB. The SWB car is too close to the XF. I was really impressed with the XF range when I drove the cars last year but the XJ is in another league.

First off, the XJ weighs less than the XF, 5er, and E-Class, thanks to its aluminum construction. The chassis is also amongst the stiffest in its class and it was apparent on my test drive. The updated GEN III AJ-V8 is a gem of an engine. The response from the naturally aspirated motor is incredible, even though the power and torque output aren’t skyhigh at 385-hp and 380lb-ft, respectively.

The 6-speed ZF is spot on. The trans software is amongst the best programed in the industry and it allows for fast, perfectly rev-matched downshifts. No need for a messy 8-speed here. I was expecting a fair bit of understeer, especially in the LWB car that I drove but no matter how hard I tried the car stayed neutral at best. I’m sure the car could be coaxed into some nice slides but I didn’t dissable the nannies completely. I did however hit the speed limiter, which was set at a joy-killing 125-mph in the naturally aspirated car. Both the 470-hp Supercharged and 510-hp Supersport versions have a 155-mph speed limiter. Judging by the acceleration all the way up to 125-mph, i’m pretty sure that the NA car can achieve 155-mph easily if the governor is removed.

I really loved the details in the XJ L. The touch sensitive interior lights and glove box opener are really cool. I also thought the condensation forming on the metal jet-engine like air vents was pretty cool. You just don’t see things like that anymore. The interior wouldn’t look out of place in a Rolls or Bentley, infact I think the Jag interior looks much better.

Overall, the new XJ L is nothing short of being phenomenal. I was really impressed by the Panamera 4S when I drove it last year and I would have to say that the XJ is atleast as good, if not better. With the arrival of the new XJ, the Maserati QP and the Panamera have a lot to worry about. The 7-series, S-Class, and A8 are just boring luxo-barges in comparison.

This Truck Transports Nukes Across USA