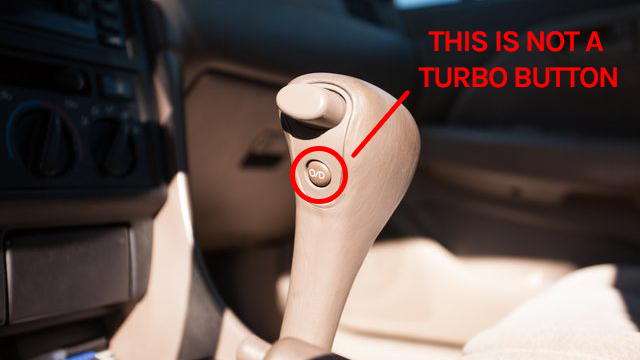 I was talking with a friend of mine who had just bought a Dodge Charger. I was asking about the spec and performance of his car when he suddenly said with a gleaming smile, “It has a turbo on it as well.”

I was genuinely surprised, and started inquiring about his newly discovered turbo. But then he said something that actually made me speechless. He said, with the same innocent joy, “I press a button on the gearshift lever and it turns the turbo on!”

At that time, I genuinely didn’t know how to react. The moment he mentioned a button on the gear lever that can potentially make his car go ‘faster’, I knew what he meant. But I didn’t know how to break it to him that his car is not snail powered (turbo charged), but in reality that button is just an Overdrive button. I said ‘wahh!’, and changed the subject, although I did explain it to him after couple of weeks. He took the news fairly well.

The question is what exactly is O/D button? I am sure many of you already know what it is, but for those who are not aware of it; let us explain it a bit. The point of the overdrive is to lower the engine speed, yet maintain the speed at which you are travelling. So in reality, you are actually in overdrive when you are driving, and pressing that ‘turbo button’ will actually turn the overdrive off.

Overdrive is actually a gear that has higher gear ratio than that of your engine’s direct drive. So let’s say, if your car is at 3000 rpm, and cruising at 120 km/h when it’s running on direct drive gear, the overdrive gear will reduce the engine speed while maintaining the cruising speed. So if your overdrive is engaged, it will reduce the rpm from 3000 to, let’s say, 2500 rpm (this is just an oversimplification for understanding the process). Turning the O/D off simply brings the engine speed to the direct drive speed (higher rpm).

The point of the article is not to go in the technical details of the mechanics of an overdrive system, although we can do one of those in the future as well, but just to explain it simply.

Note that O/D feature is only available in automatic transmission vehicles, you won’t find one in your stick-shift.

UPDATE: Thanks to Kim Allen for this little O/D trivia.
“Overdrive was a popular addition to manual (Stick shift) gearboxes on many British cars in the 60s and 70s that had 4 speed ‘boxes. It was usually available on 3rd and 4th and was electrically activated by a switch on the gearstick. When 5 speed boxes became the norm the overdrive feature was no longer necessary.”