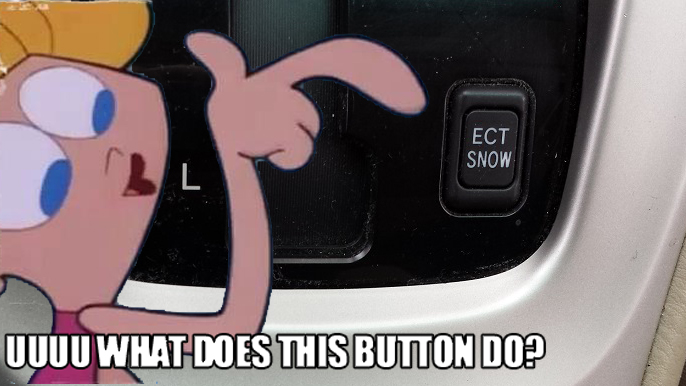 TRIVIA: What Does The Snow Button In Your Car Do?

In response to our last article about that ‘turbo button’ in your auto cars, one of our readers was interested in knowing about a similar button his car that says ‘Snow’ on it. He wanted to know what the point of snow button is.

Since driving on snow can be tricky, and not many people are able to cope with the snow and can end up being in accidents, the automakers in the bid to make the driving as safe as possible has come up with, sort of, another safety feature.

If you are twitchy on the gas paddle when taking off on an icy surface, there is a major probability that your driving tyres will lose traction, and start to skid. Skidding tyres mean no forward movement. And also, losing traction in the snow or icy condition is arguably one of the worst things you can do when driving. It means your car is not in your control and it will slide to wherever it wants to. You must have seen those funny and sometimes fatal videos of cars sliding downhill with absolutely no control in lovely northern areas of Pakistan.

Hence the ‘Snow’ button. The point is not to let you lose the traction when you accelerate. When snow mode is on, even if you stomp on the race paddle, the ECU will not let the car go crazy. ECU will regulate and iron out the twitchy or abrupt acceleration episodes, keeping the driving tyre in control of the surface as much as possible.

Another thing you must keep in mind that different automakers have different attributes related to snow button in their respective cars. You will find snow button in manuals as well as auto. And also in some cases, pressing snow button helps car to gain traction by ECU deciding to apply brakes to the spinning wheel in bid to slow it down and catch the driving surface. In some cases, the snow button not only over corrects the race paddle input but also shifts to 2nd gear for driving off from a halt in case of your conventional auto gearboxes, or change the CVT gearbox algorithm to help it drive off as gently as possible, maintaining the maximum traction. Transmission also starts to upshift quickly.

Whatever logic your car manufacturer has applied to that Snow button in your car, it all boils down to keeping you and your passengers safe in snowy/slippery conditions. Either its by changing gear shifting map and regulating accelerator inputs (delay throttle response), or driving off in 2nd gear from standstill, or applying brakes to stop wheels from skidding, or all of the above, it is there to help you be in control of your vehicle as much as possible.

Perils of Driving in Snow – Pakistan by pakwheels

Would You Be Interested In These Shoes By Audi?