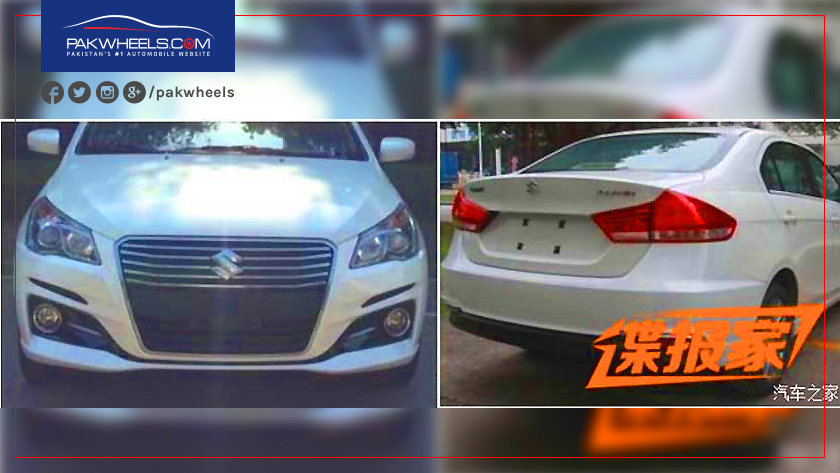 The spied photos reveal a reworked front Suzuki Ciaz (Alivia in China). Currently, both Suzuki Ciaz and Suzuki Alivia bear uncanny resemblances with a very short list of changes separating them. Thus, this new facelift suggests company’s focus on aesthetic changes at the first glance. It is pertinent to mention that both cars have a similar platform but intended for different markets, thus these new (spied) features making to ASEAN markets might prove to be a reality very soon. The spied images highlight that Alivio’s new facelift has received a larger but horizontally slitted grille, revisited front bumper and headlamps. While the rear ends sports tweaked tail lights and a much cleaner looking bumper.

As mentioned earlier, Suzuki Ciaz is currently on sale in a host of markets including China under the nameplate ‘Suzuki Alivio’. Essentially the same vehicle, reports are suggesting that Alivio is due for a facelift later this year; augmented by the surfacing of spy shots for a new model. It is important to mention that Pak-Suzuki has quite recently introduced this car in Pakistan as a CBU and as per several reports PS is importing this car from Thailand market. Thus the possibility of a new Suzuki Ciaz making to Pakistan depends on its eventual launch in ASEAN markets, more specifically Thailand & India. Suzuki Ciaz was introduced in:

Moving back to the images, the (new) facelifted Suzuki Alivio features a reworked large single-frame grille that hosts horizontal bars finished in chrome. The headlamp housing seemingly features glossy black inserts, coupled with bi-xenon headlights, it really makes the front end more pronounced than the current model. Life on the rear end isn’t so prolific, as changes are limited in scope and quantity than its front end. Nonetheless, there is a re-designed rear bumper and longer tail lights, which adds a subtleness to the overall appeal of this car. It is pertinent to mention that no pictures of this car’s interior have surfaced on the internet yet, but some reports indicate towards subtle interior changes along with rain sensing wipers, auto-leveling headlamps and a new instrument cluster. The details on engine options are yet to be seen but there is a strong indication of Suzuki introducing CVT transmission in this car even if there is no update in engine options. It needs to be seen if 2018 will bring Suzuki Ciaz/Alevio facelift globally or not.