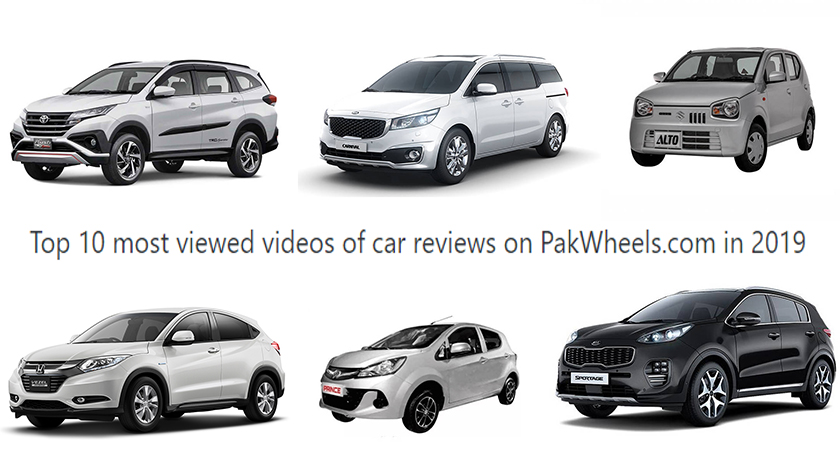 Top 10 most viewed videos of car reviews on PakWheels.com in 2019

The first in the list is Toyota Rush which is an MPV and a rear-wheel driven vehicle. Toyota Rush 2018 is a 1500cc compact SUV, powered by the 1.5-liter petrol engine. The car is available with a 4-Speed Automatic and 5-Speed Manual transmissions and its engine make 104 PS of maximum power and 136Nm torque. Check the video below:

Launching of an 800cc budget hatchback to rival the legendary Mehran was a bold move by the United brand. Some of the prominent features include colored door handles, parking camera, power steering, matching side view mirrors, enriched seat fabrics, and a spare wheel. There is a total of six colors available in the United Bravo. These colors include maroon metallic, beige metallic, royal blue, grey metallic, silver metallic, and white. The price of the United Bravo stands at PKR 985,000. Review video is below:

Vezel is one of the most sought-after crossovers in Pakistan. The 1.5L Hybrid unit in the Vezel is an excellent performer and makes Vezel a very fast crossover off the line. It has great throttle response and can easily beat Vitara in a straight line as well as in overall fuel economy all thanks to an electric motor and the battery pack.

After the introduction of the Auto Policy 2016-2021, KIA is one of the automobile companies that decided to launch their vehicles in Pakistan. KIA Sportage is a world-renowned five-seater SUV that looks sporty and is practical to drive. Compared to Honda Vezel, the rear legroom and seating comfort are much better in the KIA Sportage. It also has rear vents for air conditioning and a 12V socket to charge your electronic items. The headroom for both the front and rear passengers is ample.

Toyota Hiace has entered its sixth generation which was first launched back in 1967. It is a popular commercial van in Pakistan which offers ample passenger and cargo space. The sixth generation of the Toyota Hiace is more aerodynamic, and sleeker compared to the outgoing model. The new Hiace comes with an automatic transmission. The new Toyota Hiace is available in three models in Pakistan. The GL Tourer Delux, Delux High Roof, and Standard Roof. The fully loaded model, GL Tourer Delux, is available in PKR 8,090,000. See the review video below:

Audi A4 is a front-wheel sedan, which costs approximately Rs.60 lacs. The car’s total registration cost, including luxury tax, cost Rs.2.5 lacs. Given Pakistan’s roads, the A4’s suspension is good, but it has a clearance issue when crossing over speed bumps.

Suzuki Alto VXL 660cc is a top of the line variant, which was launched this year by Suzuki to replace the legendary Mehran. The auto gear shift VXL variant vehicle was highly anticipated in the auto market. It is the first 660cc vehicle to be locally produced in Pakistan, which can explain why its launch was the most anticipated event in the auto industry this year.

The new Prince Pearl 2019 boasts an aerodynamic and sleek shape with curves at the right places. You can find fog lamps integrated into the front bumper. The halogen headlamps are huge and contain the daytime running lights (DRLs). The pronounced curves can also be seen on either side of Prince Pearl. Side mirrors are body-colored and house indicators. The rear bumper contains reflectors. Prince Pearl also comes with 13-inch alloy rims.

Lexus is a premium brand renowned for making luxury and durable vehicles across the globe. The LX 570 is the largest and most expensive SUV sold by Lexus. The price of a 2016 Lexus LX 570 is between PKR 4 to 4.5 Crore. Lexus is a brand associated with Toyota; therefore, the LX 570 shares some similarities with the Toyota Land Cruiser V8. However, the LX 570 is more superior and premium when compared to the Land Cruiser V8.

The first generation of this vehicle was launched back in 1998 and the third generation in 2015. The Grand Carnival launched in Pakistan is the third generation facelift, which the company has launched globally at the beginning of 2018. The vehicle is equipped with a 3.3 V6 petrol engine, which is indeed a powerful engine, mated to a 6-speed auto transmission with a Tiptronic that produces 270 horsepower at 6,400 rpm and 318 Nm of torque at 5,200.

Despite resistance EV policy to get functional in January 2020