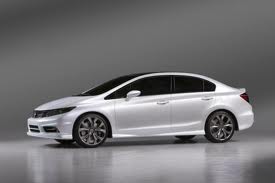 IIHS, Insurance Institute for Highway Safety which is funded by the Insurance industry in USA, has named 2012 Honda Civic as the top safety pick from the cars of its category, small cars. Following are the results of the tests:

The Top Safety Pick designation stamped by IIHS on Honda’s 2012 Civic came in a matter of need when Honda was facing fuel-leak recall problems. The Civic was crashed in various ways the IIHS knew and 2012 Civic came out tough. In order for a car to be the Top Safety Pick, the winning car must perform good in all the four tests by the institute which are: The Institute rates vehicles good, acceptable, marginal, or poor based on performance in high-speed front and side crash tests, a rollover test, plus evaluations of seat/head restraints for protection against neck injuries in rear impacts.

Apart from the aforesaid tests, vehicles must have ESC (Electronic stability control) because, according to institutes research which indicates that cars with ESC significantly reduces crash risk. It makes the driver able to have control during emergency maneuvers.

But we can’t be sure if all these safety features will be available in the model which is going to be introduced in Pakistan, however, click here to see the full list of results of cars in their respective category.