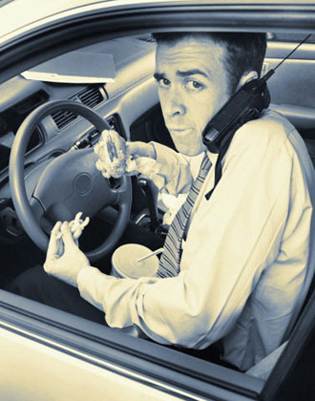 Are You A Good Driver? Think Again!

By FLi_GTi On Jan 29, 2011
0 56
Share
According to surveys by auto insurers, virtually everybody thinks they’re above-average behind the wheel. Call it the Lake Wobegon effect*.

Sure, you buckle up, don’t apply mascara in traffic,read the newspaper on the motorway or watch X-rated movies on the in-car DVD player . But it takes a lot more to be a good driver. After all, somebody IS causing all those accidents.

Maybe it’s you. Ever gone digging for a CD? Hassled a slower driver out of the fast lane? Kept another car from merging or changing lanes? Does your driving change once you spot a cop?

Perhaps we’re not all as above average as we think. Take this short quiz to see how you fare.

Q: Which would the good driver use: a hand-held cell phone or a hands-free setup?

A: Neither! A 2003 study by Great Britain’s Transport Research Laboratory found that talking on either device creates a driver about as attentive as one who’s at the legal limit of alcohol consumption!Cell phones are just part of the much larger problem of driver inattention, which contributes to at least 25% of police-reported crashes in the United States only. Trying to catch a dropped french fry or arguing with a spouse distracts, if only for a moment.

Solution: “The secret of good driving,” according to experts, “is four boring words, because no one wants to do it: self-discipline and concentration.” In other words, hold all calls — and that lovers’ spat — until you get home.

Q: When driving in fast-moving traffic, where should you focus your eyes?
a. On the preceding car’s bumper
b. 150 feet ahead
c. 300 feet ahead
d. None of the above

A: d. One of the biggest mistakes drivers make is that they don’t use their eyes correctly and don’t take in the entire scene.

Solution: Experts suggest several strategies; aim higher. People naturally look only about 100 feet ahead of themselves. When you aim low, you can’t see high, but when you aim high you can see low.” (Try it right now.) Especially when traveling at high speeds, drivers should raise their gaze to see what’s happening a few hundred yards down the road, or farther, say experts. At 100km/h, that spot will be here before you know it.

Look through things. Don’t drive behind a car you can’t see through or can’t see around,look as far around corners as possible. You can’t react to something you can’t see!

Keep those peepers moving. The average human’s “central vision”, what’s in focus when you look at, say, that picture on the wall spans just 3 degrees, while most humans’ peripheral vision is about 180 degrees. To truly see everything that’s happening around you, constantly shift your eyes slightly instead of simply staring forward.

Q: You’re driving 80 kph in rush-hour traffic. How many car lengths should you leave between you and the car ahead, in traffic?

A: None. OK, this is a bit of a trick question. Not leaving a large enough cushion is a major factor in auto crashes. When it comes to so-called following distances, people usually talk about so many car lengths for so many kilometers per hour.Well! it’s rubbish. Why? Because it’s too hard to figure distances when driving.

Solution: Use the simpler “two second, four second, 10 second” rule for dry roads, wet roads and icy, snowy or muddy roads. As the car ahead passes something that’s not moving (a lamp post, a road sign), count slowly how long it takes you to reach that same spot. If it’s rainy out and you reach that spot before you count four back off. Four seconds sound like too much? You’ve got to ask yourself, do I want to be impatient, or do I want to be alive?

True or false: You’ve now made a nice following distance between you and the Volvo FL10 22 Wheeler rig ahead. You’re set, right?

A: False. A buffer isn’t a cure-all. Driving instructors say that few Joe Four-Strokes out on the road think about how they’ll get out of a bad situation when it strikes. And even the driver who leaves room ahead can get hit from behind when a pileup occurs.

Solution: Always have an escape route, a backup plan for when things go south. Yours could be as simple as pulling onto the adjacent road shoulder, or knowing that there’s no car in the next lane, if you need to swerve. Don’t let yourself stay boxed in among other automobiles or get trapped in the blind spot of an 18-wheeler.

Don’t have an escape route? Move until you’ve got one. While experts don’t advocate speeding, they acknowledge that sometimes, staying safe means pressing on the gas briefly, to get out of potentially bad spots. And since the road is always changing, you constantly need to update your escape route.

The same general strategy applies to other unexpected situations, When someone gets in a slide, or they get in a bad situation, they look at what they don’t want to hit.Bad move! Where your eyes go, “your body will follow.” Instead, look at your escape route.

Q: Where on the steering wheel should your hands be when you’re driving?

A: Not at “4 o’clock and 8 o’clock.” The rationale behind “4-and-8” that many driver’s-education classes advocate is that it keeps a driver’s hands out of the way of the steering column’s airbag, preventing injuries to hands and arms, and to the face. That’s stupid. With hands low and elbows on your thighs, you have little ability to control the car.

Solution: Better to raise your chances of avoiding an incident altogether by having your hands in the tried-and-true “10-and-2” positioning, Or, experts suggest dropping the hands slightly, to a “9-and-3” position, to keep them out of an airbag’s path.

You’re also probably turning wrong. In this age of airbag-equipped cars, experts no longer recommend the hand-over-hand method of turning the steering wheel. Instead, use the “shuffle” method, which feeds the wheel through your hands and keeps them from crossing in front of the airbag.

Q: You’re on a mountain road and begin to skid on a patch of ice, with a drop on one side and an oncoming truck on the other. What action should you take?
a. Pop the car into neutral
b. Pump the brakes
c. Keep a close eye on the danger ahead
d. All of the above
e. None of the above

A: e. Here’s why: While some people believe it’s best to put a car in neutral in the event of a slide, taking away any power from the wheels, you’re better off never taking your hands off the wheel. If you’re in a manual-transmission car, of course, you can simply depress the clutch.

In modern cars equipped with anti-lock brakes, pumping the pedal is the worst thing you can do. ABS already “pumps” the brakes thousands of times per second; adding your own efforts only reduces its effectiveness by reducing the amount of time the brakes are applied. For maximum stopping power, apply the brake until the threshold when the ABS system almost kicks in. It’s a learned skill; practice it in an empty parking lot.

Lastly, like a skier in the trees, a driver should look toward where he wants to go, not at the obstacle in his path.