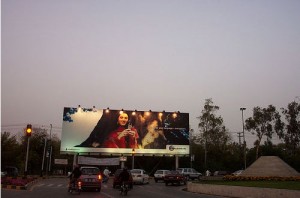 A billboard or hoarding is a large outdoor signboard, usually wooden, found in places with high traffic such as cities, roads, motorways and highways. Billboards show large advertisements aimed at passing pedestrians and drivers. The vast majority of billboards are rented to advertisers rather than owned by them. (definition by wikipedia)

Driving on the most busy roads in city, we find crowded billboards on both sides of roads, most famous and busy roads are filled with more billboards.

Drivers operate in an increasingly complex visual environment. As we enter the twenty-first century, the driving task is more complex than ever before. Not only are there far more potential distractions available within the car (e.g. mobile phones, radio, cassette players, CD players, GPS devices) but the external environment has also become far more complex. There are more cars on the road. Moreover, the visual environment is also more complex, with a proliferation of signs, billboards, adverts, shop fronts, and even ‘public art installations’ like we see these things on many most famous roads of our cities, which are filled up with side by side billboards. Have a look when you stop at a signal and you will find many billboards around you in different directions to catch the attraction of every person at any place around them.

Given this situation, it is important to be aware that the increasingly complex visual environment raises the risk of driver distraction, and if so, what specific aspects of it are most likely to be distracting? Contemporary advertisements, for example, are increasingly eyecatching, provocative and ‘explicit’. Does this have an effect on driving capability, and if so, what can we do about it?

It isn’t that distractions haven’t been a problem to reflective people throughout the ages. The mind can dig up distractions, no matter how few. Every thinker, every saint has had these problems. It’s a strange thing to collectively live at the beginning of the 21st century with an attraction to distraction. Seems better to back pedal and become learners about silence. And that’s really a hard thing to do when all you know is billboards.

The effect is real. However, it is situation-specific. Many billboards and signs may have no measurable impact on road safety, but there is overwhelming evidence that, atleast in some situations, signs and billboards can be a threat to road safety.

It is probable (although it has not yet been proven), that drivers can be distracted by isolated, illuminated signs and billboards by the side of the road.

Billboard advertisements are designed to catch a person’s attention and create a memorable impression very quickly, leaving the reader thinking about the advertisement after they have driven past it. They have to be readable in a very short time because they are usually read while being passed at high speeds. Thus there are usually only a few words, in large print, and a humorous or arresting image in brilliant color.

Most attracting billboards are those colorful ones which shatter feminism. Almost 90% of billboards show off female models to catch more and more eyes. This is alarming and hazardous for drivers, within a blink of eye the car running after you come closer to you, or case might be more disastrous.

Our government should imply some rules and regulations on installation of these billboards, while driving these should not attract the driver’s attraction but those who are passengers can read them easily, this can be easily regulated by putting them in proper directions. When a billboard is on the way and driver can look easily on it, may cause diversion of driver’s attention. If a person has to move his neck then he is doing it  consciously usually drivers are careful in this matter.

We light the truth about HID technology to clear your misconceptions