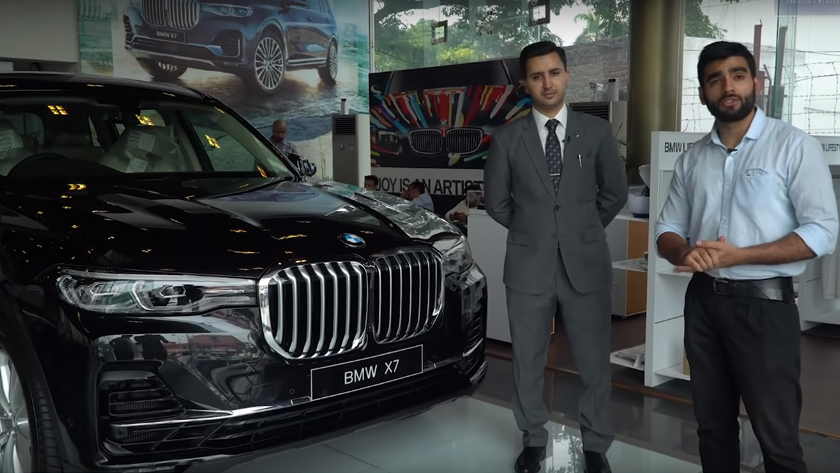 Pakwheels.com continues to bring car reviews for its audience. Here is a review of the new BMW X7.  The BMW’s long-anticipated X7 seven-seater SUV is finally here, and based on our observations, it was definitely worth the wait.

The BMW X7 is the latest flagship SUV produced by the German multinational company. This is the largest SUV in the German lineup, as well as the first seven-seater SUV. The BMW X7 we are reviewing is at the showroom of Dewan Motors, Davis Road in Lahore.

The BMW X7 is all about making an expression. The vehicle stands out for bolder designs and more power. The car is 17 ft long and 6.25 ft wide making it the longest and the widest SUV. This car has a way lesser curb weight. Despite the largest size among these SUVs, the car’s curb weight is the least.

The BMW DNA is about headlamps and the kidney grilles. Right off the bat, it’s clear that the new X7 is built on huge Kidney Grille, a testament to their new line ups.

The headlamps are now relatively moderate and curved. There are modern looking and have lost the round-ups. The X7 comes with standard adaptive LED headlights. The lights move according to the movement of the steering wheel. When you steer left, they go left, and when you steer right, they go right. The headlights are light-sensitive according to the light source. If the light outside is very bright, then day time running lights will adjust accordingly.

The standard X7 has 20-inch standard rims. Although if you don’t like the design, you can always shuffle. For the first time, X7 has a capacity of 22 inches as additional and optional.

The option for the 360-degree camera is impressive. While it is not offered in the standard model, it can be ordered.

On the rear end, holding true to the BMW’s basic design the same LED headlights are installed. They are sleek to maintain the symmetry of the car. There is a chrome lining, a signature trademark for the seven series. There are two rectangular exhausts.  The dual exhaust system is rectangular, going against the norm for SUVs because the X7 is the flagship edition. You can get artificial exhausts under the M support if you desire a “roary” sound from the engine.

There are air vents on the side of the car. X7 is inspired by the seven series which have air vents. Not only are you getting a better size, but also better performance.

The X7 has air suspension and double excel wishbone. Moreover, the BMW X7 can endure certain amounts of off-road capacity. At high speed, the vehicle’s suspension drops automatically by 20mm. After de-acceleration it comes back to its normal suspension. After all, BMWs are made for high performance.

The BMW X7 supports a rich interior. It is tech-packed, spacious, and has everything one could ask for.

All of the X7 is automatic. Everything can be done with the touch of a button. There is no need to do anything by hand. The whole cabin can be controlled by buttons in the boot. You can convert the whole cabin into boot space. The seats will automatically move forward themselves, and there will be no need for any manual work from you. There is maximum boot space, and it truly is phenomenal. A simple press of a button returns the car to its original setup. All these features are standard.

There is no issue of leg space, even in the third row. The seats have an electronic configuration as part of the standard X7. everything can be done with an easy push of the button. the car has Vernasca leather seats. The leather designs can be changed for something more premium-like Marino leather.

The third row has three seats, but still maintains comfort and luxury. Rear legroom is pretty decent for a third row. The third row has cup holders as well, like all the other rows. There is a panoramic view, and climate control AC is also available. There are no issues with headspace.

The BMW comes with a standard key. The car has unlock, lock and cabin buttons. There are ambient lights under the door handles.

The BMW X7 has an all-wooden interior, which is the standard for X7. The new speedometer is called the BMW Live Cockpit View Professional. The analog meter is gone, and this is a digital meter.

The infotainment system is the iDrive seven control system. This is highly user-friendly, and the best in the market. Previously this was independent; now the infotainment system has been combined with the speedometer for a more driver-oriented facility. The screen is touch-based, but there are options for buttons as well.

The engine start button has moved. All the power buttons which are controlled electronically and mechanically have been moved to a panel in the base of the car. The car also has auto height control.

The panel has traction control, a 360-degree camera, and aisle option button.

There are driving modes, for the car’s performance:

The 360-degree camera comes with a variety of options such as parking lines, even if the door opens it will show.

A new launch is a high ride. There are five different levels. The car’s suspension can be adjusted using these levels. You can bring the car down to a sedan level. The infotainment will show what level it is on. The BMW is not a high car, because there is a focus on comfort and convenience to make entry-exit easy for all ages.

The panel has glass finishing. It looks very sleek and symmetrical. There is actual crystal involved. Every BMW is an automatic transmission. There is an option for manual shifting as well. The car has all the answers.

Media can also be controlled by buttons on the panel. Traffic conditions are also available by the easy press of a button. AC vents have been completely redefined.

The infotainment system has gesture control for the master seat. The driver can increase or decrease the volume of the music using hand gestures, or even mute. Only the driver can do this from the master position.

The car is thoroughly responsive, like Siri for iPhones. The car will talk back and perform the tasks you ask it to perform. Voice assist is very useful. It will even guide you to places when you ask for help. It’s like your Iron Man, and you’re talking to Jarvis. Overall, a very cool facility.

The car has automatic climate control. Everybody in the car has their independent climate settings. Every AC seat is individualistic.

The car also has numerous fast charging posts for all the seats, and this is just in the standard vehicles. All the seats can be controlled from the driver’s door. The doors also have leather finishing and ambient lighting. The lights blink red when the door is open.

The X7 offers the largest panoramic sunroof. Every seat has a view over the sky.

In the BMW X7 luxury is the aim. People can order a feature where the driver can receive feedback to prevent him from dozing off or losing focus. Every feature on the panel is also available on the standard X7’s steering wheel. The steering can be adjusted at whatever position you want.

There is a simple double tap on the bonnet which will easily open the bonnet. There is no latch system anymore. Everything is highly automated.

The engine is impressive in fuel economy. There is no seven-seater SUV with a better fuel economy than the BMW X7. The engines are based on BMW efficient dynamics, with the aim of minimum emissions and maximum horsepower. The car has a fuel average of 10km/l.

Prices are in euro. If the euro goes up, the price goes up. The standard BMW X7 is for 305,000 euros. This price is inclusive of everything, such as customs and duties. Approximately five crores.

In this price range, there is the option of the Lexus LS 570, which is priced at approximately six crores. However, the BMW X7 is superior.

Electric motorcycles soon to be introduced in Pakistan