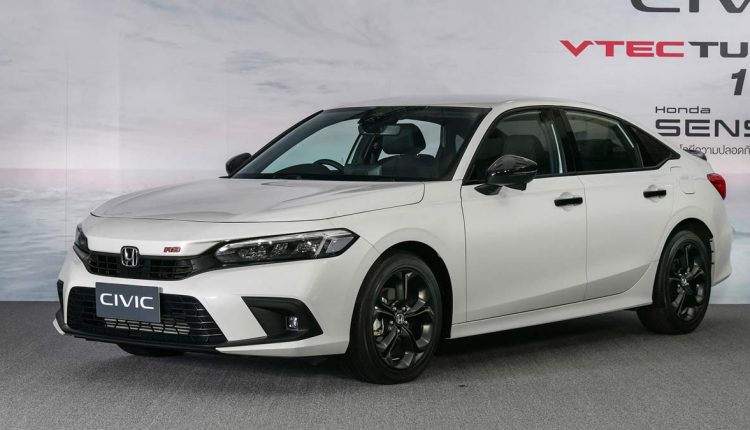 Globally, the automotive brands are offering more and more Sports Utility Vehicles/ Crossovers. Regardless of this new trend, whenever there is any news related to Civic and Corolla, automotive fans are on their toes, and this includes the public from Pakistan. The well-known worldwide name in the compact car segment, Honda Civic arrived for global reveal in October 2015.

The 10th Generation Civic set a new benchmark in its segment and won numerous awards across the globe. The current Honda Civic X has a revolutionary design inside and out. It grabbed a lot of awards globally, including the North American Car of the year award and sold over 1.7 Million Units just in the US alone. After five successful years of the 10th generation Civic, the 11th generation Civic sedan was revealed earlier this year on April 28, 2021, in the United States. Later on June 23, the Civic hatchback was revealed for the North American market. The 11th Generation is already for sales in the US and Canada since June 2021, while more recently, on August 6th, 2021, the new Civic sedan model was launched in Thailand as the first right-hand-drive market.

The 11th generation Civic is offered both in sedan and hatchback body styles depending upon market/ regions. The performance sedan as Si Civic [ North American Only ] while the most potent hardcore Type R hatchback will arrive sometime next year. Honda will not provide the two-door coupe for the 11th Generation; a two-door model was specific to North America. The company recently discontinued it for the current 10th Generation.

Well, the launch of the new 11th generation Civic outside Pakistan automatically started a new discussion. Just before the 10th generation Civic launch in Pakistan back in 2016, the public was very anxious due to all the praise and attraction the model got in the overseas market. There was an exciting buzz on social media with excitement and anticipation, especially because of the turbocharged engine first time in the local market. However, the Pakistan launch didn’t go well as planned as there had been a lot of built quality issues, and even today, people are reporting consistent problems. Although it’s raining crossovers heavily nowadays in the country after the arrival of more brands and models, there is still a huge Civic following everyone would like to know the whereabouts of the next Generation Civic in Pakistan.

Recently, Honda Atlas Pakistan is in the news for wrong reasons, especially since the launch of the older 6th Generation of Honda City. But it seems Honda Atlas is doing something behind the curtains, and I just found out about it and would like to share it with my readers. This will definitely put smiles on the faces of Honda fans, and I am sure they will be ready to start their timers.

While we were all busy with all the other local, new model launches in the country, Honda Atlas Pakistan imported a demo unit of 11th generation Honda Civic from Thailand. Its typical process all local car companies adopt before the launch of the new model and purpose is developing the Pakistan domestic model.

Here I would like to share some information that proves an 11th Generation Honda Civic in Pakistan, and it’s been in the possession of Honda Atlas for over five months now. The CBU unit was cleared by HACPL/ Honda Atlas Cars Pakistan Limited at Karachi port on May 10th, 2021. 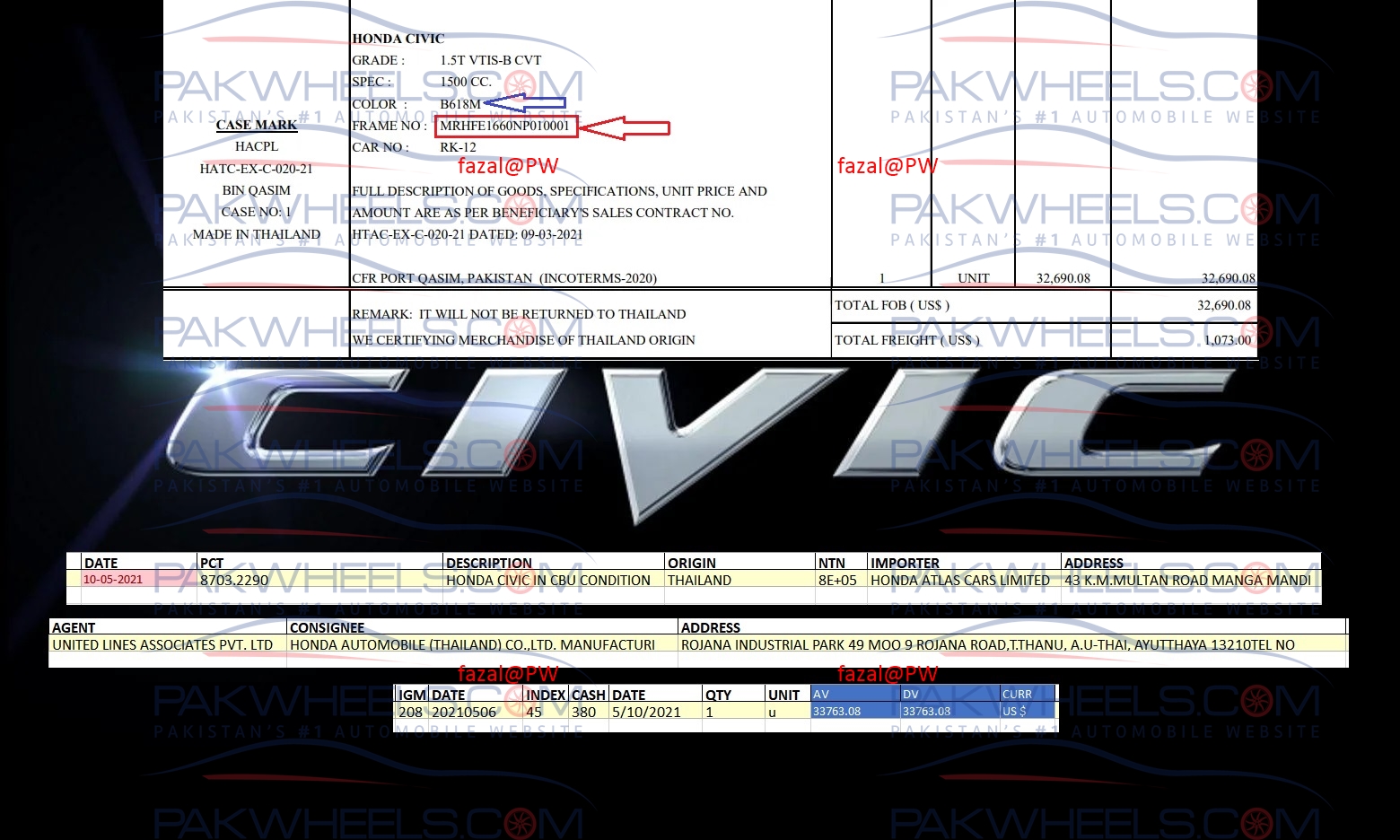 The description of the goods shows a single unit of 1.5L Turbo Honda Civic with Frame No, which you can call a chassis number or VIN/ Vehicle identification number along with the colour of the car. So, how we can confirm, this is the 11th Generation?

Well, there are some hints right there in the available details. The frame number shows “MRH”, which is basically the World Manufacturer Identifier and Honda models made in Thailand.

So, this shows that Honda Atlas imported the 11th generation Civic and most probably working on developing the Next Generation of Civic for the domestic market. The declared value of the vehicle is $33,768.08, and that is before any taxes and duties. The model variant imported by Honda Pakistan is the VTIS. Keep in mind that VTIS is basically a loaded variant [ below the fully loaded RS variant] offered on the 10th generation Civic and specifically for the Australian market. 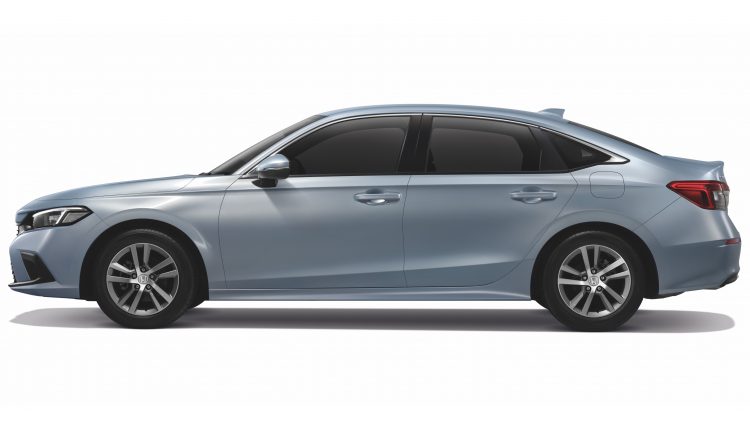 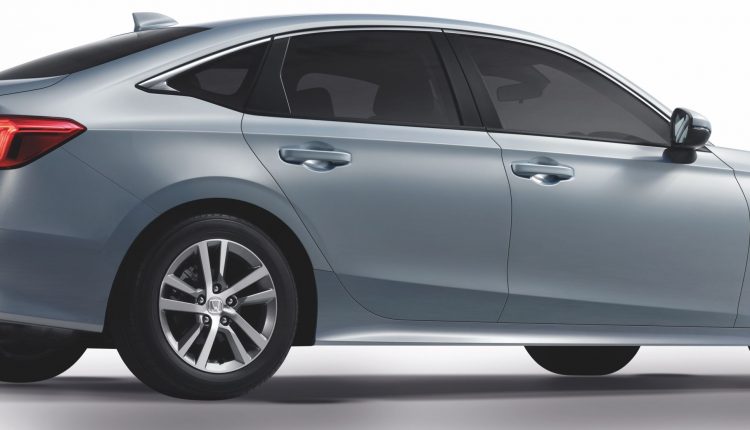 Then there is a global chip shortage, and Civic is also badly affected globally for order fulfilment, and this means that in Pakistan, we might not have the CKD kits that quickly for the local assembly. Even Thailand, where the Civic is already released,  is extensively back-ordered for local customers.

Here I would like to share something exciting and an intelligent move by Honda Atlas. The 11th generation Civic was revealed globally on April 28 2021, in the United States, but if you see the import documents of the CBU Civic, you will know that it was cleared on May 10 2021. This means the CBU unit of the 11th Generation left Thailand for Pakistan at least 3 to 4 weeks earlier and sometime early April 2021.

This was when the Thailand domestic model was also getting ready for its local launch, and most probably, the imported unit might be a unit from the early phase of 11th generation production. I am sure Honda Thailand and Honda Pakistan made sure that the exported units were not visible to anyone as the model was still not launched globally. I think it arrived in a special sealed container, and no one saw anything. This shows that Honda Atlas is on its toes to launch the next model as quickly as possible and do the needful developmental steps for the local model.

You should also keep in mind that the 11th generation Civic in Thailand is only available in 1.5L Turbo engine, and the famous R18/ 1.8L engine [ was available on Civic X] is killed and no more an option on the 11th generation Civic sedan. If that’s the case, there is a due chance that a Pakistan assembled Civic might also be offered just with the one engine option and that is 1.5T.

Still, there is a possibility we might see a 1.8L Naturally Aspirated in our Pakistani version of the new Civic, and if Atlas is planning to do so, it will add more time for the launch of the local model. Civic is yet to launch in multiple ASEAN countries and we will know if 1.5T remains as the only engine option.

I think it is easy to guess that we are at least 6 to 8 months away from the launch of the Next Generation of Honda Civic in Pakistan or possibly even more . It is pertinent to note that the Civic X was launched in Pakistan within nine months of the global US launch, four months after Thailand, three months after the Indonesian, and one month after the Malaysian launch.

As of now, the 11th Generation Civic is launched only in Thailand as far as our region is concerned, and we can assume that Indonesia, Malaysia, Australia might be ahead of us again this time.

I am sure Honda Atlas would not like to mess up the new Civic the way they did on the 10th Generation, and maybe they will take a little longer this time. I hope and wish we get a more featured and better built Civic this time, and Honda Atlas don’t disappoint us with the 11th Generation. They should know and must be fully aware that the market is now much more saturated, and buyers have multiple options available in the market.

As of pricing of the next Civic, it will obviously be more than the current Civic we have. Some people are predicting it to be above Rs5 Million, but I think it will not be the case. Unfortunately, we might get less features and equipment as always, comparing overseas model.

Stay tuned to Pakwheels.com, and we will bring more information on this topic as soon as it is available. meanwhile, join exclusive discussion thread on 11th Generation Civic 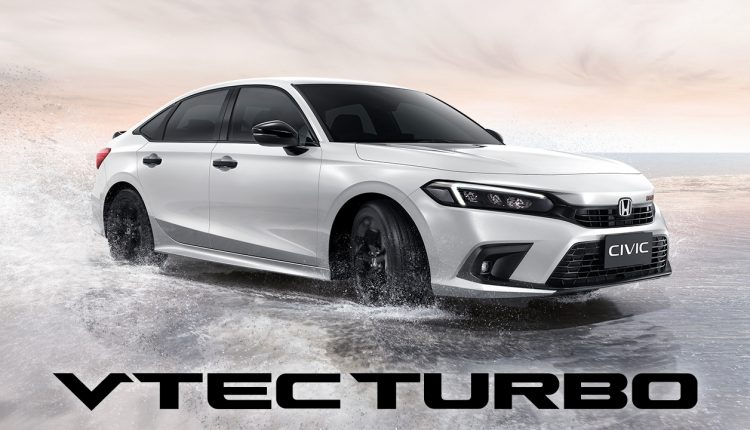 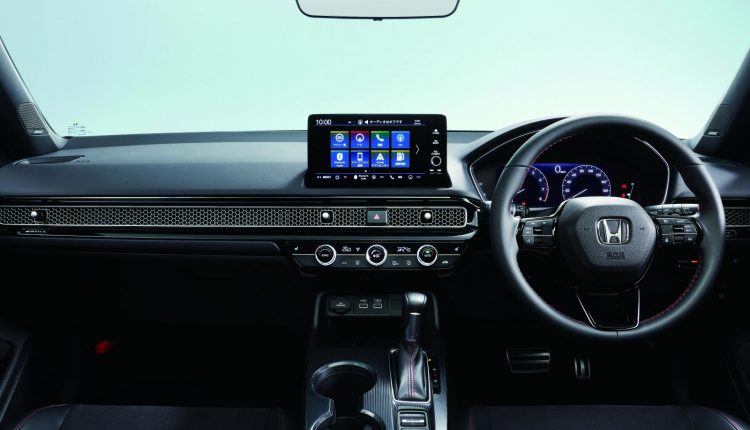 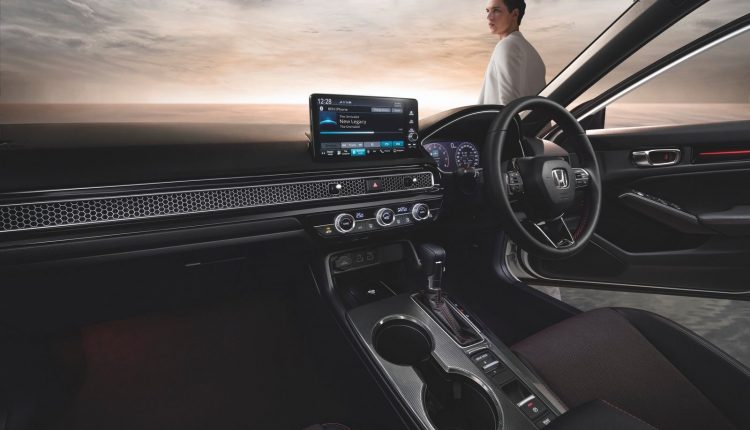 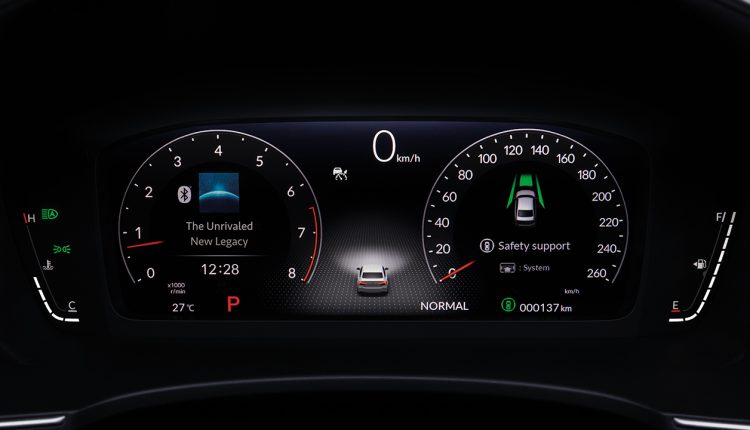 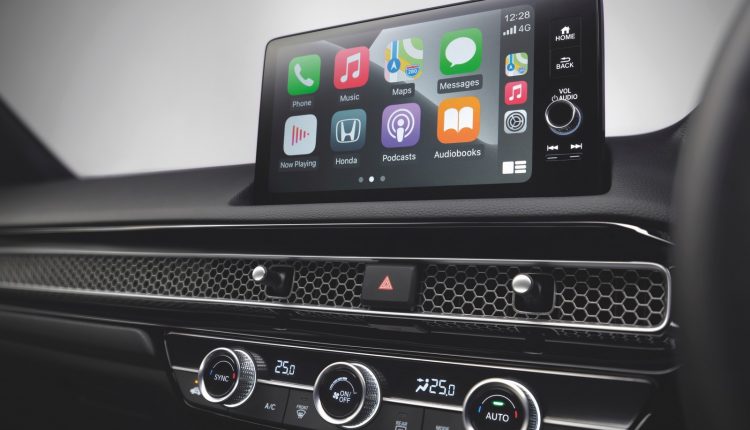 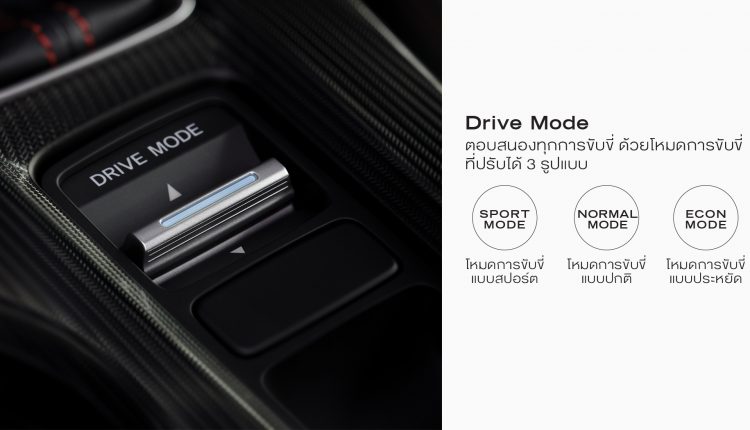 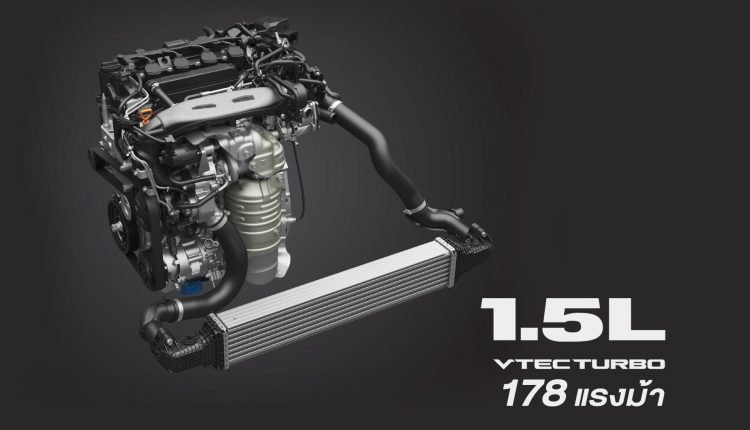 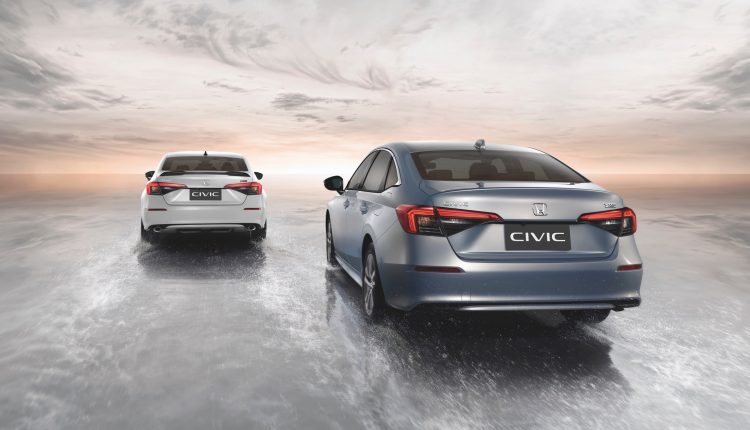