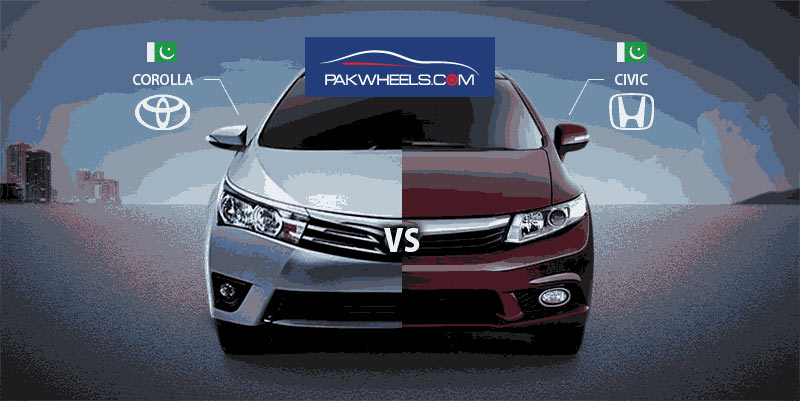 Comparing 2014 Corolla vs Civic on paper

It seems that the Corolla vs Civic war will never end, and how can it possibly end? The fan-boys of each side, though are missing everything good and are actually fans of cars which the world has called the most boring, did seem a bit undermined when the Civic came against the mighty Corolla.

But the scenario of the Pakistani auto market has changed over the past few years, imported vehicles played a major part in that change despite the falling imports and the resale value of Civic has become better despite the price being ridiculously high.

Now, on paper, we can compare the two vehicles and I have chosen top of the line models which are equipped with the best that companies have to offer. My sources to gather data on the cars were limited so I MUST have skipped few details on the cars, so help me compare the two cars, atleast on paper since we can’t get actual ones.

Although the two cars are almost the same on paper but I am sure that they are miles apart from each other when it comes to driving experience. When the new Civic came out, I didn’t like it that much but after the launch of Corolla 2014, my vote goes to the Civic. Corolla 2014 looks real cheap with all those chrome plating here and there and I think the placement of the rear lamps is not balanced. Rear lamps are placed too high which doesn’t give a balanced look to the car.

So personally, my pick would be the Civic here, what would be your choice?

Trend of wrapping cars and maintaining them

Prev Next
122 Comments
Leave A Reply