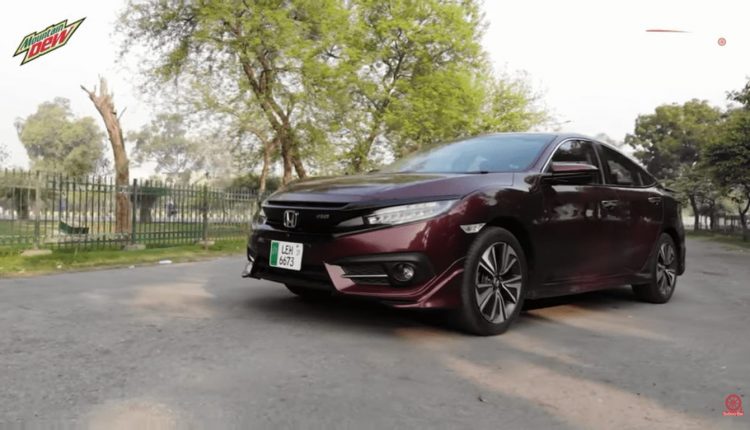 We are back with another expert review, and this time we have the Honda Civic RS Turbo. Honda launched the 10th generation of Civic in 2016. The company introduced two variants of the 10th gen Civic, Turbo and Non-Turbo. The Turbo variant could not make an impression in the local market due to some performance issues, and Honda had to discontinue the Turbo variant in 2017. Two years later, the company relaunched the 10th generation Honda Civic Turbo and called it the Civic RS Turbo. In today’s review, we’ll explore the differences between the old Civic Turbo and the new Civic RS Turbo and evaluate its performance.

The main reason behind Civic Turbo’s failed launch in 2016 was the bad fuel quality in Pakistan. Now that we have Euro-V fuel in the country, Honda Civic RS Turbo is here to prove its power.

Starting with the exterior of the new Civic Turbo, we see an RS badge at the grille. The old car had a piano black grille, and so does this one. The car has LED headlights, just like all the 2018 onwards Civic models have. Then there are beautifully designed front lights with new chrome garnish and fog lamps with SMD lights.

The side profile of Civic RS Turbo shows off 17-inch alloy wheels that are an inch bigger than the old 10th generation Civic variants. Signature Turbo door handles, turn signal LEDs in the side mirrors, a shark fin antenna, and everything else about the side profile is 100% the same as the old Civic Turbo.

The car has a similar shape as the old 10th generation Civic Turbo on its rear end, except that there is an addition of a spoiler with brake lights. Taillights have the same chrome garnish as the front.

The car interior is not much different from the old Civic Turbo. The most noticeable difference is the red stitching of the dark grey and premium black leather. The new design and red color are giving a sporty touch to the car interior. You will also see red color in the fuel bars of the car’s metering unit. There is a paddle shifter that you don’t find in the non-turbo Civic models. It makes the car easy and fun to drive.

The car has a dual entertainment system. There are two 7-inch touchscreens, one at the front and one at the rear. Both screens are connected so all the passengers can control this entertainment unit. There are four cameras for the front and rear view of the car and two selfie cameras installed in the touchscreens for Skype and Zoom calls. The only issue with the infotainment system is the distorted voice quality when taking phone calls with Bluetooth connectivity.

The steering wheel is telescopic, and you can adjust its position manually as per your height. The driver seat also has the option of manual adjustment.

On paper, Honda Civic RS Turbo is Pakistan’s fastest locally produced sedan. PakWheels experts drove the car for 2500-3000 kilometers with regular fuel to test its 1.5L turbocharged engine. The car has an excellent pick; the engine gives an instant response and revs like a sports car.

The Civic RS Turbo lives up to the company’s claim of being the fastest sedan in the country with 174 horsepower and 220 Nm of torque. The car has outstanding performance and power delivery.

The car comes with power-pack features, such as:

Honda Civic RS Turbo has a digital climate control AC system with rear AC vents for passengers in the back.

We have talked so much about the power and pick of the car’s engine, so you’d naturally expect the brake system to be a little off and less powerful. That’s not really the case here. Civic RS Turbo has proven to be a very stable car even on the roughest of roads. Its Vehicle Stability Assist feature has served the car well with top-notch stability.

With excellent engine performance, powerful and stable drive comes a little less comfort. The car does not have a hard suspension, but it does make you feel closer to the ground than other sedans. Overall, this Turbo sedan has optimal ground clearance.

Honda Civic RS Turbo is a perfect combination of power and comfort and undoubtedly the fastest locally produced sedan car in Pakistan.

So, Here is an Update on Upcoming Civic 11

Has Sindh Govt Played a Role in Developing Google Maps?