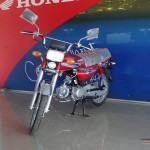 Even after achieving 80 percent indigenization of parts, assemblers of Japanese bikes have increased their prices due to the fall of rupee against US Dollar and Japanese Yen, which has resulted as increase in steel prices and dearer imported parts.

But the production may come down owing to the massive floods in the country which affected some 2 million people.

Moreover, As we mentioned in our report previously regarding the affect of flood on sales of Motorcars, APMA VC also added that flood with greatly impact the sales figure of Pakistani made bikes, and that actual impact on the sales will be measured through the sales of the month of September.

The price increase which has come in to effect from 29th of September on the Japanese bikes are as follows;

Atlas Honda also raised PKR 600-2000 on the prices of its current line up of motorbikes.

A delightful coincidence between a Ferrari and a Honda

How to measure your car’s horsepower?