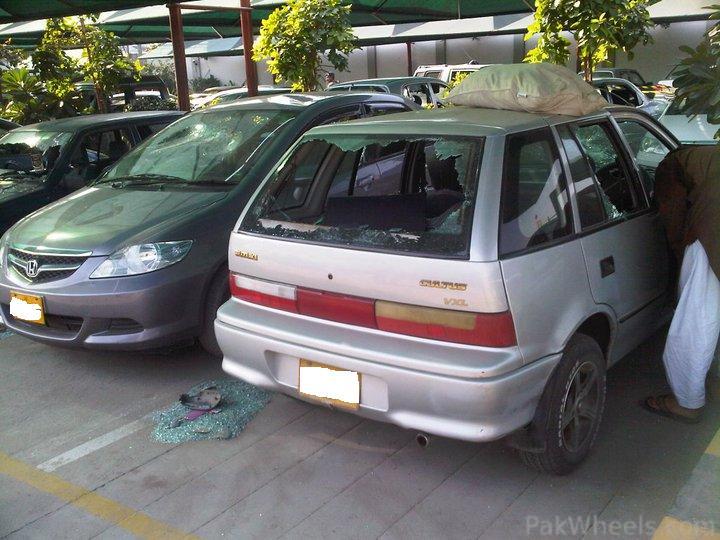 The dawn of 19th January ushered itself with a tragedy of an unimaginable magnitude as 4,000 workers of Karachi Electric Corporation (KESC) were arbitrarily removed from their jobs in a move which shook the financial foundations of thousands of families. KESC attributed this downsizing to the tumbling and precarious financial health of the company and claimed that these ‘non-core’ jobs would be outsourced in order to cut costs.

This however was not the only unfortunate event that took place that day. Unscrupulous elements amongst the peaceful protestors took to the streets and resorted to vandalism and displayed their blatant disregard towards the law of the land. Countless vehicles which belonged to the middle management and lower management were damaged and some expensive vehicles belonging to the upper management were torched. I ask these elements, was it justified to inflict damage on property of your fellow workers? Would it have lead to, in retrospect, reinstatement of the sacked employees? Is causing financial damage to the company you once worked in, the best way to regain employment in the very same organization? Is this what our religion or our culture teaches us?

Nowadays a vehicle is akin to a lifeline for all especially for those who work and have to rely on it to commute to and from their workplace. In this era of economic crisis and continued inflation, one’s car is his prime asset after his house. On average, vehicle prices are around Rs. 800,000 for a hatchback car, which is the vehicle of choice for most of the middle class. They pay for it after working their fingers to the bone for number of years. Thus when they see their prized possession damaged by complete strangers, it affects them in multi-faceted ways. First of all, the repairs strain their already meager financial resources thus causing a financial loss. Secondly, and more importantly it deals a psychological blow as they lose confidence in the social and justice system which is very dangerous. It slowly causes a shift in the mindset of the same people and they feel unsafe in their own country. Consequently this breach of trust in state institutions causes a domino effect and these people usually end up taking the law in their own hands in future to protect their assets.

Sadly, this incident is not an isolated one but represents continued manifestation of intolerance and blatant disregard for law in our country. Every day, the public is bombarded with news of corruption, nepotism, inflation, tax evasion, financial crimes and deteriorating law and order situation which makes one lose all hope and faith in the state institutions. When the common man, through the eyes of the media, sees that the elite are indulging in illegal activities with abundance, he takes it to be his birth right to do the same.  Destroying public and private property is recently being seen as a measure of success of a ‘protest’. Vandalism has become the order of the day. The same is evident by events on the eve of assassination of Late Shaheed Benazir Bhutto or 12th May or as recently as today, when a group of students, who are supposed to be the architects of a prosperous and enlightened Pakistan, themselves resorted to the heinous act and damaged cars struck in the traffic when one of their colleagues was overrun by a speeding truck.

Here we must examine the root causes of rampant incidents of vandalism in our society. Empirical evidence points out that masses resort to vandalism generally because they feel that accountability mechanisms and implementation of law is weak which means that they can easily get away with such crimes. In Pakistani context, it is said that it is an avenue through which masses express their frustration and vent their anger primarily towards the government. It is incumbent upon all of us, especially the educational institutions, social service organizations and NGOs to let people know that acts of vandalism actually causes the public more harm than good. While the government may balk under pressure and yield to short term objectives, it is never a long term solution.  First, due to certain unscrupulous elements and their vested interests, the image of the country is ruined in the international world. Secondly, confidence of public in large is shattered as they feel unsafe everywhere. If examined in a larger context, a business man or a foreign investor may not invest any more, or worse divest present holdings, due to uncertainty and clear signal of poor law and order situation as indicated by frequently occurring acts of vandalism which would lead to economic decline and loss of jobs.

Acts of vandalism are not exclusive to Pakistan but are carried all over the world. In France for instance, hundreds of cars were torched by youngsters in ‘celebration’ on New Year’s Eve, however unlike Pakistan, vandals are dealt with an iron hand. On the eve of 2010, over 400 people were arrested on charges of vandalism. French President announced that these vandals cannot carry a driver’s license until they have paid for the damages caused. Our government too needs to focus on practical implementation of laws and ensure the safety of public and private assets.

While cutting off the lifelines of thousands of families with a single stroke of a pen is deplorable and condemnable, so is the attitude of masses in our country and their complete disregard for the law and properties of other citizens. The government must ensure that the accused are not exculpated and that those whose properties are damaged should be compensated by the same elements. It is high time that the government as well as other social institutions make it their utmost priority to impart values of tolerance and respect for other citizens. We must act, before all of us, as a nation, become desensitized to such atrocities.

The Most Important Fluid In The Car – Part 4 Of How To Keep Your Car Always New?