And we are with another news, not a good one though, the government has also increased Federal Excise Duty (FED) on CBUs/imported cars. Earlier, the ruling party increased the FED on locally assembled cars under the new mini-budget. The detail of revised FED on imported cars has been given in a circular of Federal Board of Revenue (FBR), dated January 20th, 2022.

According to the document, following are the FED rates on imported cars. 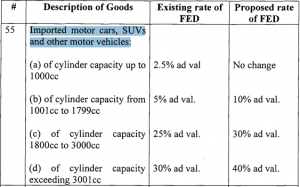 In short, the FED has been increased 5% to 10% on all engine categories. This means the prices of CBU/imported cars like MG HS, Haval Jolion, and Haval H6 will go up. The new FED comes days after Economic Coordination Committee (ECC) of the cabinet approved massive Regulatory Duty (RD) hikes on CBU units of Electric Vehicles (EVs), Hybrid Vehicles and cars with spark/compression ignition engines (conventional engines).

The government increased RD on the CBUs as follows: 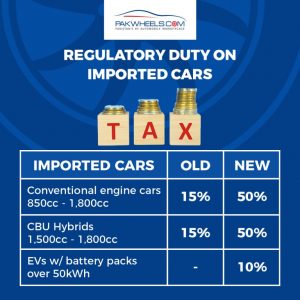 After the implications of revised FEDs, Pak Suzuki and Toyota have already increased their prices, while others will follow the suit.

What is your opinion about these new FEDs on imported cars? Share your thoughts in the comments section.