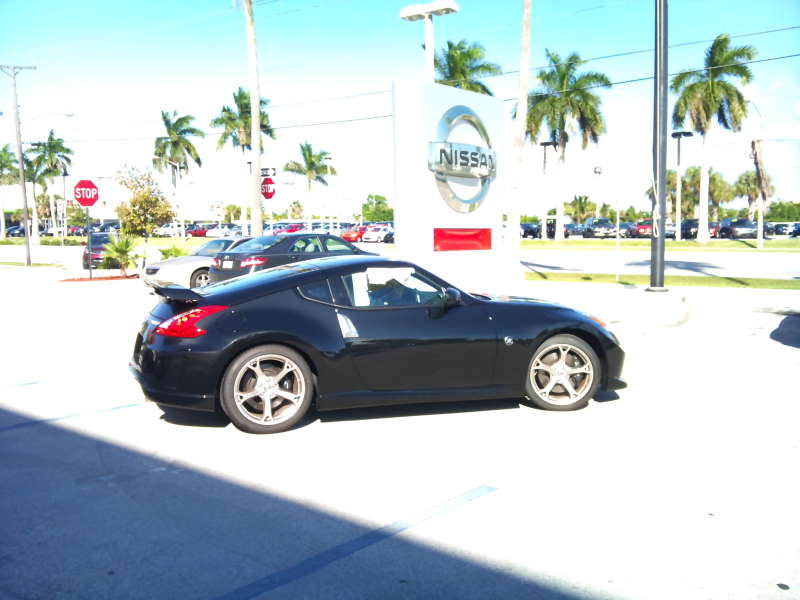 Put your foot to the floor, and it’ll scream. Drive over a small bump, and feel the wrath of a Nissan Motorsports track-tuned suspension through the steering. Go for a 2-3 shift, and your right forearm swells to the size of Texas, accompanied by a manly face expression showing great testicular fortitude.

At no point in time does the Nismo 370Z stop being a manly, hardcore, “steal-your-gun-out-of-your-own-hands-and-shoot-you-in-the-eyeballs-with-it” car. Because while it may have a dedicated MPG gauge as part of the instrument panel, it still has a Nismo catback exhaust, changed fuel maps, a stiff track-tuned suspension, 19 inch wheels riding on low profile rubber, a short-throw gearbox, and sport seats that read “Nismo” in a very masculine shade of white and red.

First impressions:
At the beginning of the summer when I had no shortage of free time, I saw a movie named Inception. That night, Leonardo DiCaprio came into my dreams, and all I remember the next morning was being overcome by the urge to wear a suit and tie and fake my way into test-driving a Nismo 370Z. Today, three months after the fact, I did just the thing. No, I didn’t purposely wear a suit and tie just to get a test drive. I only wore a dress shirt and tie….and pants. But they don’t really notice those.

The 370Z is a wide car to begin with, and the Nismo body kit installed on this model made it look even wider. That’s not at all a bad thing because an average onlooker would give the car nothing less than three glances, and that is a proven fact. The stance is further improved by a ride height drop over the standard 370Z thanks to the new springs, showing a hint of camber if you stand at the right angle.

I’d been told horror stories about how the 370Z was not an easy car to drive, especially with a heavy clutch. NONE of them were true because a person like myself, who barely touches a clutch pedal twice a year, got used to the car in less than a hundred yards. The clutch uptake was a bit confusing at first, with it not biting till at least half the travel. But personally, I like it to be that way since there’s so little room for bucking and jerking from a start on a car you’re not used to.

The Good Stuff:
Getting used to the clutch pretty quickly, I decided to not wimp out and put the car through acceleration bursts in first, second, and third gears. In first gear, the traction control shot on instantly. The decrease in back pressure due to the new exhaust is very evident over the stock 370Z, and the midrange acceleration is much more instantaneous. 2nd and 3rd gears did have effective acceleration, but it felt like there was a lot more noise than movement. The gear ratios were well-spaced, quickening up the acceleration between gear changes.

The second I sat in the car, I made sure to press the “S-Mode” button to the top-right of the gearbox. The Synchro Rev-Match feature was source for controversy amongst hardcore racers when it was first announced, but GOD it’s so much fun no matter what kind of driver you are! Basically the way it works is that it detects what gear you’ll be in when you downshift, and when you’re in neutral between shifts, it hangs the revs at that level so you can pop the gear in, and be on your way. But what if you want to trick it and instead of being normal, you go from 5th directly to 3rd without so much as consulting 4th gear? Well, it anticipates that before you even consider the debauchery. I even played with the system a bit when I pulled up at a stoplight, went from 3rd in to neutral (which it detected), and when I pushed the lever all the way to the left above second, it revved the throttle to 3500 rpm, and stopped when I let the stick back to the middle. When I put the stick back above 2nd, the RPM rose back to the old level, again. Not only was it stupidly entertaining (and damaging to so many transmission components), it made a great exhaust note at 3500rpm! It really is a great feature, but I was able to rev-match myself on most downshifts pretty easily, once being able to heel-toe to my own amazement. Shaping up to be a good car, then.

The Bad Stuff:
Well, it costs $41,000, and you don’t even get free girls with it. Dropping that type of non gold-backed currency on a Nissan should get you one woman, at least. Although, you’d only be able to fit one woman into the car, so you’d be happy with just one.

Visibility wasn’t that great, but I’ve driven enough coupes to know that it never is. Trade-off of a small neatherland, I guess.

I wasn’t much impressed from the short-throw gearbox either. In a Civic Si or an S2000, the shifts are spot on and direct. In this, the travel is definitely shorter, but the shifter still feels to be the same size as stock. The end result being that I switched very stupidly from 2nd into 5th, twice. However, the Synchro Rev-match revved the engine right up to the proper level when I put it back into 3rd.
And that’s about it.

I think if this car were a man, it’d be Sylvester Stallone. It’s all man, muscle, produces a deep sound, but to the average consumer, it’s a bit pointless like Rocky VI. Still, it makes a good point for itself when it really gets going, and THAT is worth… $41,000, plus title, tax, and registration.

And last but not the least, how can you not take a picture of GODZILLA while visiting a Nissan dealership;

PakWheels guide to master the art of driving

“Leading Together” – Indus Motor’s theme for its annual dealer conference