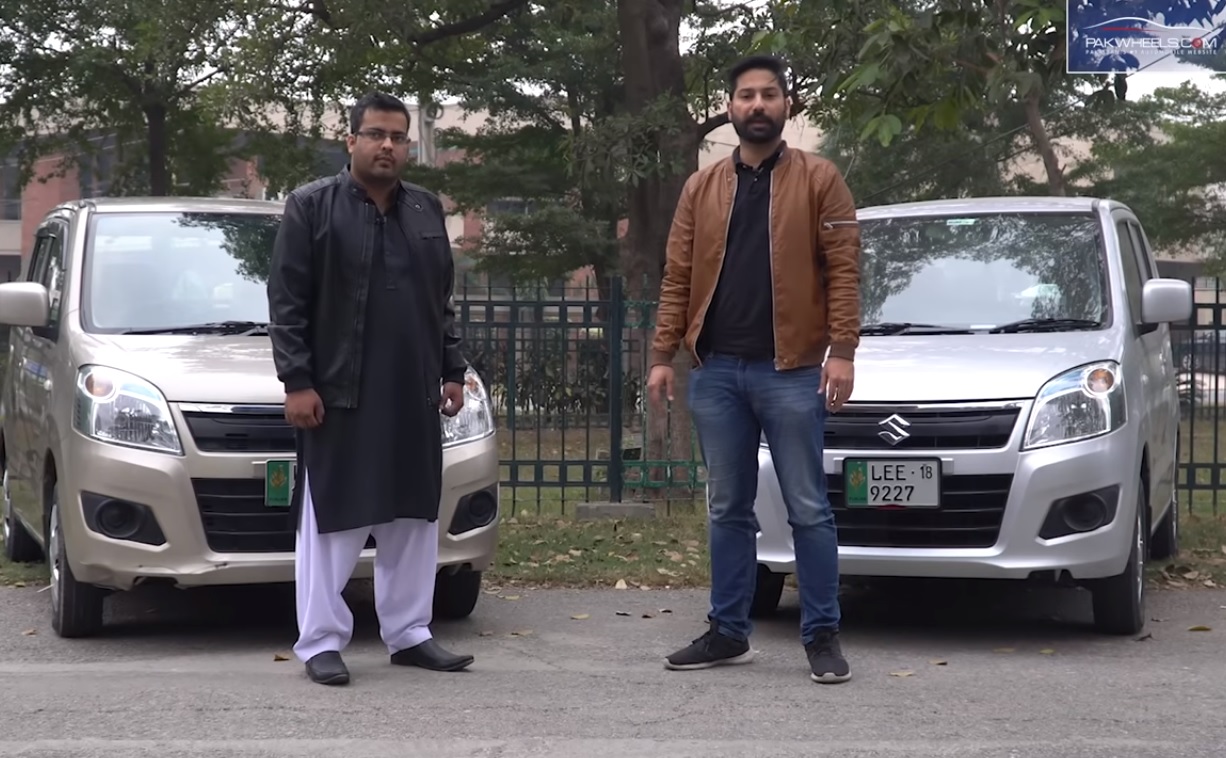 If you are looking into buying a popular 1000cc hatchback in Pakistan, then Suzuki Wagon R must have crossed your mind. Wagon R became popular quickly in Pakistan and faced competition from within the Suzuki family. The competition is from another 1000cc hatchback – Cultus. Both cars differ in exterior and interior design and have different features to offer. Cars under review are two models of Wagon R – 2018 and 2016 models. There are some key differences between the two models mentioned above. The owner of the 2016 Wagon R had fewer options back in the day and settled for Wagon R after considering the previous generation of Suzuki Cultus, FAW V2, and 660cc imported Japanese hatchbacks. The owner purchased it in PKR 1,054,000 in 2016. Currently, two variants of Wagon R are available – VXR and VXL. The VXR is the base model of Wagon R.

The overall exterior design is boxier compared to other hatchbacks like Suzuki Cultus and FAW V2. Wagon R is available in six exterior colors – pearl red, solid white, graphite grey, sand beige, silky silver, and super pearl black. The VXR model comes with steel wheels, while the VXL model comes with alloy wheels. In the VXL model, there are body-colored door handles, chrome grille, key-operated and remote-controlled tailgate opener, and body-colored bumpers. The VXR model has the same features except for body-colored door handles and chrome grille. Both models have multi-reflector halogen headlamps, green-tinted windows, 2-speed windscreen wipers, and rear-window demister. The VXR variant has pivot-type black outside door mirrors, and the VXl variant has turnover-type body-colored outside door mirrors. The paint quality of both the front and rear bumpers is on the inferior side. You can also purchase exterior accessories like door visors, rear upper spoiler, side body molding and side under spoiler, rear under spoiler, front under spoiler, and fog lamps. Space is given in the front bumper for fog lamps.

The Wagon R comes with an electronic power steering which is smooth and convenient to operate. The air conditioning unit of this car is good and is on par with those that come in bigger sedans like Toyota Corolla. The boxier shape of the car provides an ample amount of headroom for both the front and rear passengers. The car has a seating capacity for five people. Both models have a urethane 3-spoke steering wheel; however, only the VXL variant gets silver-colored garnish. Power steering is standard on both models of the Wagon R. Light-off, and the key-reminder alarm is standard on both models, whereas only the VXL model gets a tachometer. Both front seats have integrated-type headrests. Only the VXL model gets a seatback pocket and an under-seat tray on the passenger side. The VXR gets beige seat upholstery material, whereas the VXL gets it in black. Rear seats are single-folding in both models.

Only the VXL model gets electric/power windows, central door locking, and remote-controlled locks. Power windows are only given for the front. For the rear, manual windows are provided as standard. Air conditioner and heater are both standard features on both models. The VXR model gets a 1DIN audio system with 2 speakers. The VXL model gets a 2DIN integrated audio system with Bluetooth audio and calling features. Moreover, it has silver-colored inside door openers and shift knob. A 12V interior accessory socket and a remote fuel lid opener are standard on both models of the Wagon R. Sunvisors with a ticket holder are given on the driver side and passenger side. A 3-position front cabin light is given to illuminate the cabin at night. The Wagon R does not have a cabin air filter. The boot space is better than what you can get in a 660cc imported Japanese hatchback. The rear seat does not split 60/40 as it does in Cultus.

The Wagon R comes with a 1000cc k-series (K10B) engine that is known for being fuel-efficient, powerful, and noiseless. This engine produces 50kW of power at 6200rpm and 90Nm of torque at 3500rpm. The car comes with a five-speed manual transmission and fuel tank capacity of 35 liters. It also has a two-wheel-drive system. The engine also meets the Euro 2 emission standards. This car also provides a good amount of performance in mountainous areas as well, even when carrying five passengers. The Wagon R gives 13 to 14 km/l in the city with air conditioning and 15 to 16 km/l on the highway. There are issues related to the throttle body and the clutch that cause the engine to vibrate. For that, you need to clean the throttle body of the car.

The suspension is relatively soft over bumps, and the car has MacPherson strut suspension at the front and ITL suspension at the rear. Handling can be tricky since it is a tall car, and you have to be cautious when making sudden turns. There are two cupholders at the front and one bottle holder at the rear. Both front doors have storage pockets, and the glovebox is also sizeable. Therefore, storage spaces are ample in the car. Luggage area cover is also provided as standard in both models of the Wagon R. The comfortability of the front seats is optimal whereas, in the rear, comfortability is on the lower side. Since the width of the car is short, seating three people in the rear can be a bit of a squeeze. It is optimal to seat two adults comfortably in the rear of this car. There are no headrests in the rear. The rear suspension is stiffer than the front suspension, which compromises comfortability at the back of the car.

To enhance safety, 3-point ELR seatbelts are given for both the front and the rear passengers. Childproof rear door locks are standard on both the VXR and VXL models. These locks ensure the safety of children seated at the rear of the car. The immobilizer is also given in both models; however, only the VXL model has a security alarm. Unlike Cultus, the Wagon R does not have ABS or airbags to secure the passengers. Safety features can be improved and can be taken on par with Cultus and international standards. The storage tray under the front passenger seat can be used to store valuable items like laptops or jewelry for safekeeping.

The Suzuki Wagon R is a capable family hatchback perfect for the urban environment. Its small size makes it easier to maneuver in the city. Its efficient engine means that it is economical to run on a daily basis. A fairly good air conditioning system makes your summers bearable. Due to its boxier shape, the car is fairly practical to carry luggage and other items. Moreover, with a widespread dealership network of Suzuki, maintenance is easy and cheap for this car. Spare parts can be easily bought locally as well. Lastly, Wagon R also has a very active used car market and can be traded easily. This is due to its widespread popularity and acceptance by the public.

Stay tuned on PakWheels blog for more review-based content and drop your thoughts in the comments section below.

How Turbo Engine Works? All you need to know