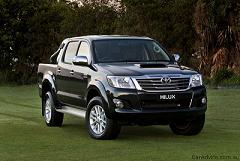 Hilux is one of most sighted pick up trucks in Pakistan and regarded as indestructible by Top Gear. Toyota just revealed more details and pictures of the 2012 Hilux with major changes in design and more power.

The new 2012 model year Toyota HiLux range will come with anti-lock brakes across the board (Toyota hasn’t mentioned if this will be tied up with an electronic stability control program). The new model will also be available in more variants, including new entry-level Workmate models, as well as offer visual revisions to the front and rear, and new seats and interior door trims throughout the range.

The design of the dash has been improved upon with the horizontal centre instrument cluster reinforcing the breadth and roominess of the cabin. It incorporates Toyota Touch, a 6.1”, full colour, touch screen multimedia unit. Toyota says the quality and feel have been revised, and all the colors fit together more uniformly, highlighted by the addition of silver ornamentation.

As far as the exterior goes, front end sees the biggest changes, as everything from the A-pillars forward being redesigned: new bonnet, radiator grille, headlamps and front bumper.

These images are of Toyota Hilux SR5. Toyota says that everything from the base of the windscreen forward has been revised to suit Toyota’s latest design language, showcasing a three-tier chrome grille layout and new twin-element headlights. All 4×4 variants will also come with an uprated 2.5-tonne towing capacity.

The new Hilux deliveries will begin in September in over 36 European countries and 135 across the globe. It isn’t clear when will the new Hilux will be introduced in Pakistan.

The 1000 BHP Group B Audi that you never saw