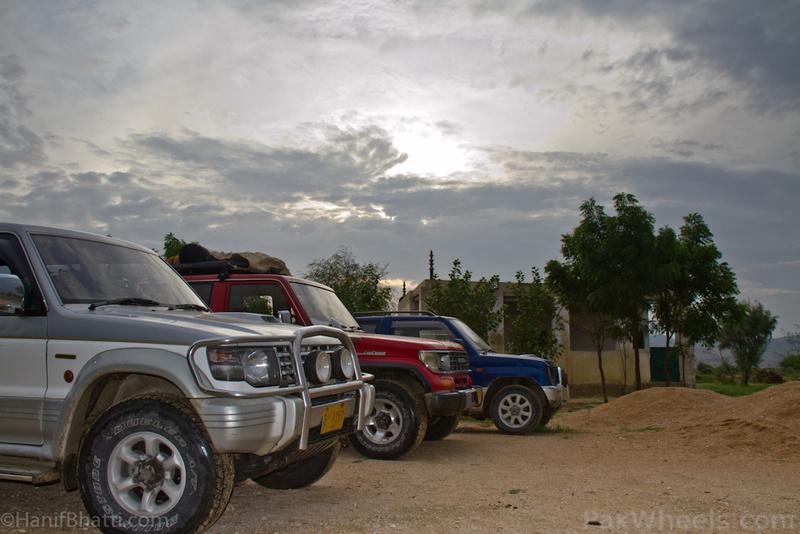 Pakistan should be known as the greatest tourism country in the world rather the agricultural country as it is known today. We were hypnotized by the mesmerizing beauty of Sindh’s Kirthar National Park where Pajero and 70 series Land Cruiser Prado worked hard to pass through almost every terrain – which I believe that these 4x4s are lions of off-road which when kept in city is like a cage in the zoo to them.

They are poised and bored, they need to break through and we don’t even enjoy looking at them in the cityscape and when you take them where roads’ end and adventure begins, Pajero and LC leave no holes barred in providing you the ultimate adventure of sight seeing in comfort of their seats as you drove them over dirt, sand, mud and rocks on the mountains to bring us at the tip of it for the best view of Sindh.

Even a Mini Pajero with 1100cc engine (from a 3-door Pajero) impressed everyone as it followed effortlessly the trails of LC and 5-door Pajero. While the 3-door 70 series LC Prado had 6 passengers in it’s cabin whereas 2 were on it’s roof and 2 hanging at the back but still, the 70 series LC led the way to the tip of the mountains while Pajero followed with 6 people in its cabin and the heaviest cargo in it’s back.

Although we spotted very few animals but the jaw-dropping-awesomeness of the entire Kirthar and Karchaat was hypnotizing. After recent rains; pleasant weather, the color green, landscape of as far as we could see, was our companion through out the trip wherever we went – it was so beautiful that we thought that God has welcomed us here.

It is best that we leave the rest for the pictures to speak however; few things we should mention is that our Guides’ were awesome, friendly and welcoming, and Government’s Wild Life Department’s guest houses were very well kept and built, supported by the beautiful landscape around, they could compete with the best hotels in the world and these guest houses are cheap too with rent ranging from 1500 to 2000 PKR.

Last but not the least, any journey becomes a pain if your fellow travelers are not welcoming, cold and impatient but my fellow travelers; Hanif Bhatti, Aqeel Baig, Shahab, Naveed Merchant, Fahd, Dr. Yaqoob, Ejaz, Shakeel, Masroor, Shoaib, Jawad and the locals along with the welcoming residents of Kirthar, Karchaat and nearby villages and towns. Today, Pakwheels has a new slogan, ‘The best people to travel and be with’.

New game ‘Automation’ is like Sim City for Automotive enthusiasts