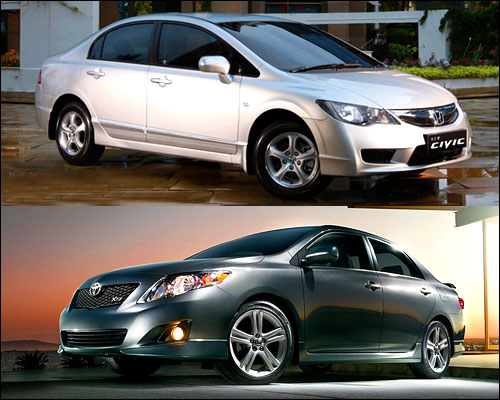 Our resident economist recently told you something which even I didn’t understand. However, I have a hint that he addressed the reason why Toyota, Daihatsu, Honda & NaPak Suzuki raised their prices. We even had a little traffic of words between us since he did not tell how the relief to the buyer was possible today. After my strong protest, he left few easy words in my email explaining how relief to the buyer is possible which you will read in the later part of the article.

Today, almost every local Auto assembler has raised their prices without any prior notification. But the mad analysts at I.I. Chundrigar Road saw this coming, sometime ago.

Almost 40% of our car parts are manufactured locally. The parts which can help in developing Pakistani Automotive Industry are brought from abroad, mostly from Japan.  The technological & high-tech parts like the engine, transmission and fuel filters, etc are imported.

Get your order booked now or you can visit the topic created sometime back at the forums providing alternatives to local mafia cars by our veteran PW member; Storm.

Why did the increase took place?

Auto assemblers blame the increase on disturbing rupee-yen parity. Since you now know that we are importing all the crucial parts from Japan, and Japanese Yen increased by 3.6% to PKR 1.0 whereas US $ increased by 0.3% to PKR 85.8. We the general consumer has to bear this price increase even though there is a solution which these hungry auto assemblers won’t accept.

In 1996, there was a deletion policy finalized but as any other Government policy this one failed miserably as well. In layman words; the deletion policy asked the Auto Assemblers to localize the part as soon as possible but nobody did; only 40% localization could be achieved.

Similarly, AIDP was launched in December, 2007 which also asked the Auto Assemblers to localize high-tech parts which they failed to.

This year, another new draft of National Industrial Policy 2010 “Rebuilding Pakistan’s Industrial Manufacturing Base” was presented which said that, ‘bad governance led to smuggling and under invoicing which led to the failure of Deletion Policy’. The draft also suggests that a dedicated Auto Design Institute be set up with a Karachi-based university, and that the Government should sponsor foreign consultants staying at the institute for the next two years.

The mad analyst say that the Government has failed to bring down the prices as the major parts are still imported and also, Pakistani Auto Assemblers are apathetic towards AIDP or any similar policy..

Our resident economist says,”The solution for the relief to the customers is that auto sector has to increase localization of auto parts by atleast 10 to 15% but it requires substantial capital expenditure and it’s a time intensive task although according to the AIDP they are required to manufacture eight auto components by next year but unfortunately Auto Assemblers haven’t made any progress in it”.

The Auto assemblers blame the failure to localize on local vending industry, call it unpredictable when it comes to delivery of its commitment whereas PAAPAM has repeatedly insisted the Government to assure the implementation of AIDP. But the funniest part of their(Auto assemblers) response is,”we do not have the sufficient economy of scale”, dude, the same car’s are manufactured in less numbers around the globe and they are light years ahead in terms of localization. Thailand is one example.

Flood is raising more alarms as sales will see another downfall, and we the general consumer will bear the burden as usual.

I am not recommending a boycott of local cars to you now but why buy such over-priced cars with zero value for money when you can find an alternate to local mafia cars?

Water, water everywhere! – Part 2 of How to keep your car always new?

Pakistani Auto industry and the world through time….