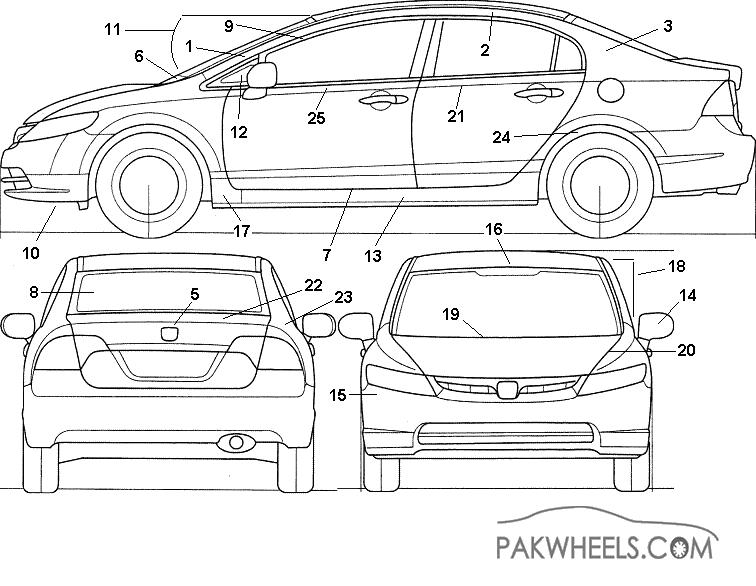 What’s what in the Automotive design lingo: Exterior

Accept it, we don’t know what the part was actually called, we just escaped that moment by making our own term. So, PakWheels is here to correct the automotive design lingo, which you probably didn’t know.

1. A-pillar: The first set of structural roof supports at either side of the windshield.

2. B-pillar: The next set of pillars, behind the front doors.

3. C-pillar: Those behind the rear-doors.

4. D-pillar: Some limousines and station wagons have them.

5. CHMSL (pronounced Chimsel): Center high-mounted stop light on the rear-boot. (Area where its located is pointed out).

6. Cowl: The bottom of the Windshield.

7. Cutline/Shutline: The line around an openable body panel; e.g. doors, hood and decklid or any visible distance between two adjacent exterior body panels.

9. Daylight opening (or DLO): The perimeter(overall shape) of any car window, including the windshield and backlight.

11. Fast/Rake: A word used to describe the angle or tilt of a windshield or backlight. The “faster” the glass, the more nearly horizontal it is. Its “fastness” is measured between zero degrees (horizontal) and 90 (vertical); i.e. a 57 windshield is faster than one standing more upright at 80.

12. Flag(Quarter window): The triangular area of a car’s front door to which the outside rear-view mirror is attached; also known as Ventipane or Vent pane; is a movable glass that allows air to be directed in or out of the cabin.

13. Rocker(Rocker Panel): Widely known as ‘Side-Skirts’, but actually, its called Rocker which is, the longitudinal sill along the bottom of the body, beneath the doors. Whereas the Side-Skirts are actually the after market extension to the Rocker.

14. OSRVM: Out side rear view mirror.

15. Fascia: Body(skin) panel located at the front of the car. also a flexible material that covers a bumper.

16. Header: The horizontal beam or structural member above the windshield.

17. Valance: A front-fender extension hanging down behind the wheel, intended to hide the undersurface and chassis.

18. Tumblehome: The inward tilt or angle of the roof from the beltline up, as seen in front or rear view.

19. Plenum: Area located at the base of the windshield.

20. Strake: Crease in the sheet metal intended as a “speed line” styling feature.

21. Character/Swage line: Crease or curvature in the side of the body used to create visual drama. Sometimes the crease is functional and improves rigidity of the outer body.

22. Deck: The horizontal surface at the rear of the car, which usually serves as the trunk lid; the upper surface of the luggage compartment.

23. Shoulder: The fold formed by the meeting of top and side surfaces. I.e, extending from hood-to-fender shoulder.

24. Wheelhouse: The bottom surface of a fender or the sheet-metal or plastic pan inside a fender.

25. Beltline: The area of the body along the door just below the side-window glass.