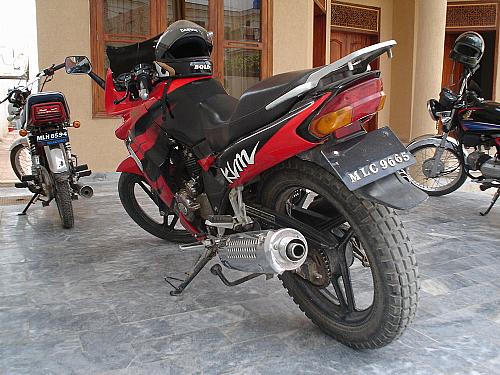 And so it began…

Everyone has a life changing moment in their lives, a happening in time when everything in your life changes, whether it is a small thing which no one notices or something for which medals are pinned to your chest by some higher government official. What I do have to share with you today is something which went un-noticed by my family and friends, but earned me some respect among the ranks of biking section of a website called; Pakwheels.com.

I was a normal kid, fascinated by “HEAVY BIKES” and how fast they were and how loud their sound was, a passion which was overlooked by my parents, thinking “Ye to bacha hay abhi” (He is only a child). Life went on and whenever I saw one of them bikes on the road or on TV, always took a moment to appreciate its greatness but nothing too fancy. Until the day, my parents bought my elder brother a so called “HEAVY BIKE”, basically a Suzuki bandit 400cc naked street bike. I guess I was happier than my brother because now I wouldn’t have to scout the roads of my city for them as one was already in my home. I looked at it every day and kept wondering when my elder brother will take me on a ride on it? That day did come and we took to the roads like eagles flying through favorable winds. At the moment I felt so alive that I almost cried. Some days later I asked my elder brother if I could just ride it myself, in the neighborhood, just to know what its like to ride one of these machines. What came as his answer is the thing which changed my life, “You will never be able to ride these bikes”.

I don’t blame him, as I only bought a Chinese 70cc bike earlier that year and to jump from a 70cc-75 kg bike to a 400cc-200kg bike was very unlikely, but that was not what he said, he said that I could never ride a bike like that. I kept quiet, and deep within myself, something snapped into a million pieces as if it was made of glass and the very next moment joined together again like it was made of titanium and I said to myself.

“I will ride these bikes and I will become a better rider than my brother and anyone else”.

So the quest began, I moved up from 70cc to 100cc and practiced on my friends 100cc Honda. Then I bought a Suzuki Sprinter 110 and also rode a lot of Honda 125s. Then after months of continuous begging, made my parents buy me a Chinese sports bike, which wasn’t big on power as it was only a 150cc but it handled and looked like one. It became a training racer bike for me and I rode it every day for hours, used to travel around my city just to know what it was like to be on a HEAVY BIKE, but still the thirst was there to go up. Luckily, a friend of mine bought a 250cc Honda CBR and I said to me “This is it”. I rode that bike with my friend’s permission and finally entered the real “HEAVY BIKE” scene. From that point onwards I started to learn about bikes, their engines, there technology, how they work and stuff and later even did a custom job on that Chinese 150CC that I had and I installed a Honda CB150 engine in it with gearbox and everything with  the help of my mechanic.

Then I joined in Pakwheels.com and from there it never stopped. Every day for hours and hours I studied bikes online, I talked with great people like Imran Bhatti, Adil (Late), Naveed, 7th gear (sorry buddy forgot your name but not your personality)and many more who contributed to my knowledge of Bikes. Then one day when I received a phone call from a person consulting with me about a “HEAVY BIKE”, was the day I said to myself, “You did it” And from there I helped a lot of people who came to me inquiring about bikes and related stuff and I tried to answer them with the best of my knowledge always! I Thank Pakwheels for giving me the opportunity of learning a great deal about bikes, improving my riding techniques and to share whatever little information I had with those who are just like stepping in the world of “HEAVY BIKES”. I have learned so much from Pakwheels, but remain only a student.

As for my brother, he bought a Suzuki GS-150 later on, and I offered him a 1 mile race on a straight piece of road, and of course I had that Chinese modified Honda 150cc bike which weighed 35 KGs more than his GS150 but he still refused and didn’t give me a reason. Maybe he knew that his refusal of not letting me ride that bandit, made me stronger than ever. At the end, this might go un-noticed by some but for me and everyone who know me, it was the beginning of the best alternate life a motorbike rider can have. To many other bikers who are afraid that they can never ride these bikes, don’t give up you will make it someday, just don’t give up. In the end I would personally like to thank my elder Brother and Thank you Pakwheels for giving me a chance to learn and share.