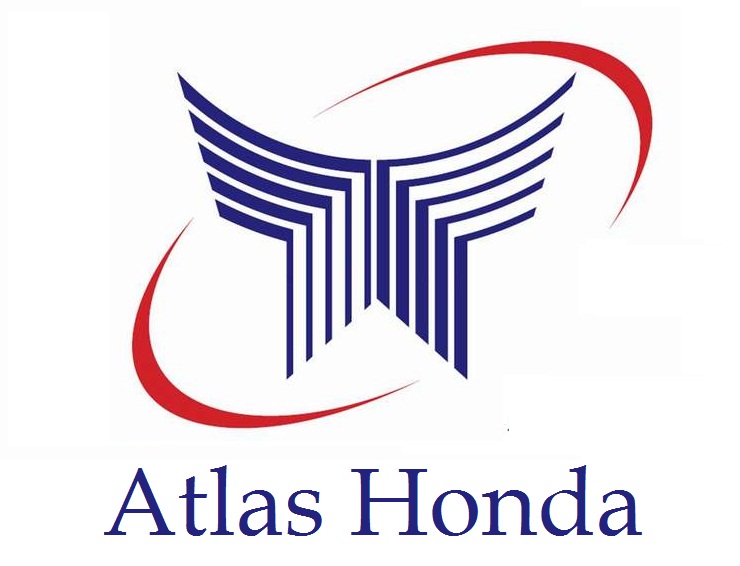 Atlas Honda Limited posted its financial results for the third quarter ended on 31st December 2019 that shows a significant increase in profits by 45% for the motorbike manufacturer.

As per the details, a meeting of the Board of Directors of the motorbike manufacturer was held on 24th January 2020 in Karachi, which approved the financial statements of the company for the period specified above. The financial year of the company started on 1st April 2019 and will end on 31st March 2020. Atlas Honda is one of the largest motorbike manufacturers in the country with a dominant market share for years. Despite the economic slowdown process in the country, the company has recorded a slight increase of 0.78% in its sales. Atlas Honda sold as many as 280,057 units in the October-December 2019 period as compared to 277,865 units in its corresponding period last year. See the table below for details.

The cost of promotional activities increased in this period, and so the sales and marketing expenses swelled by 4.6% for the company. Atlas Honda spent PKR 490.78 million on these expenses as compared to PKR 468.97 million last year. Similarly, due to sharp inflation in the country, the administrative expenses also went up by 7.8% to PKR 156.43 million from PKR 145.09 million. The other income of the company also increased by 52.8% to PKR 386.41 million from PKR 252.84 million, in the third quarter ending 31st December 2019. In the same way, the other operating expenses went up by more than 50% to PKR 91.81 million from the previous year’s PKR 60.95 million. It is worth mentioning here that the value of Pakistani Rupee remained stable against the US dollar in this period. However, the company still raised the prices of its motorbikes multiple times that resulted in an increase in the operating profits to PKR 1.20 billion, raised by 49.7%. Nonetheless, the finance costs of the motorbike manufacturer suffered a massive hike to PKR 8.28 million as compared to just PKR 2.88 million in the same period last year. 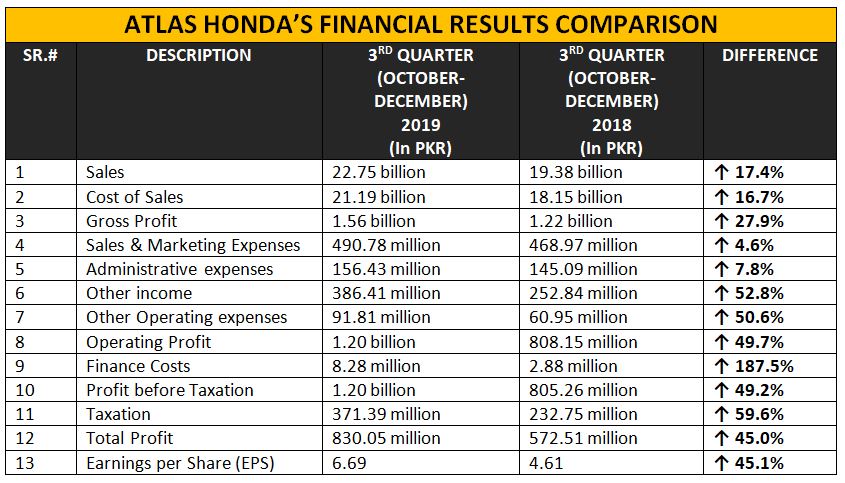 Overall, the company’s profit before taxation went up by 49.2% to PKR 1.20 billion against PKR 805.26 million in its corresponding period last year. The tax amount imposed on the company during this period was PKR 371.39 million instead of PKR 232.75 million in its previous year. Consequently, the total profit after taxation turned out to be PKR 830.05 million against PKR 572.51 million in the quarter under review. The earnings per share (EPS) of Atlas Honda also increased from PKR 4.61 to PKR 6.69, up by 45.1%.

On the other hand, the results for the nine-month period of the current financial year show a different story as the company’s overall earnings after paying taxes, declined by 10.8% to PKR 2.24 billion as compared to PKR 2.51 billion in its corresponding period last year. It also means that in the last three months of 2019, stabilized the company’s profits. The earnings per share (EPS) during April-December 2019 stood at PKR 18.07 versus PKR 20.26% in the same period during 2018.

Nonetheless, the beginning of a New Year tends to boost up sales. Will the company improve its sales in its last financial quarter? Share your thoughts in the comments section below and stay tuned to PakWheels for more statistical updates on the automobile industry.

Picanto – the safest hatchback made in the Pakistani market

Why turning off a turbocharged engine after a drive is not a good idea?