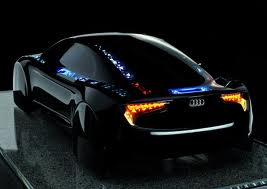 Almost all automakers have invested heavily in technologies for the future, while you may see that most of them are working on just green automobiles but there is more than that these automakers are on researching and development.

A couple of years ago, Ford had revealed that it was working on laser to replace the traditional sparks plugs and more recently, BMW displayed its new headlights to be equipped with lasers instead of bulbs or LED so Audi had to leap to get in line with these auto-making giants and therefore, Audi has revealed seven new technologies it is working on for the future.

Almost all the automakers are currently developing or have already launched EVs into the market, like Nissan, GM and others, Audi has also collaborated with WiTricity to develop wireless charging systems so that there cars can be charged on the go.

The system which is atleast two-to-three years away, uses a coil-based inductive charging system that utilizes one coil installed in the ground and tapping into the grid, with another coil mounted underneath the vehicle. Alternating current in the embedded coil creates an alternating magnetic field that flows through the air and sends the voltage to the car-mounted coil. It can be mounted anywhere and according to Audi isn’t just safe, but the system isn’t affected by rain, snow or ice.

Although parking assistant is already available on most of the high-end cars but Audi’s has taken a next level initiative which basically reads near-by parking lots and garages to find empty parking slots.

But it doesn’t stop at just the detection of empty slots, when the driver is notified of an empty space and once the driver enters in the parking vicinity/or the garage, the system takes over the car autonomously and drives itself to the parking and lot and once you’re done with your meeting or dinner, you simply open the app in your phone and the car drives itself to where you’re standing. Vehicle-to-vehicle networking should ensure collisions aren’t an issue.

Experts estimate this technology to be a couple of years away. OLEDs are incredibly light, very flexible and can produce millions of colors in a variety of intensities when stacked together. Not only that, but they’re just as efficient – if not more so – than standard LEDs.

Audi plans to use OLEDs in everything from side markers to interior lights, and could even provide drivers following another car information about that vehicle’s speed and braking.

These new body materials are also only couple of years from entering production as Audi has been at the forefront of lightweight chassis development, using aluminum to reduce overall vehicle weight by as much as 40 percent when compared to a standard steel chassis. The next step is a mixture of aluminum, steel and fiber-reinforced components that both reduce weight and increase strength.

By reinforcing an aluminum component – say a suspension piece – with carbon fiber reinforced plastic (CFRP), its strength can be increased dramatically without a commensurate increase in weight.

Traditional coil springs are quite heavy and with these new technology, Audi will be able to save as much as 40% in weight and that saving will be able to improve handling and ride comfort.

Audi is developing a technique for creating these FRP springs that involves a fiberglass helix baked together with an epoxy resin, followed by a metal alloy wire that’s woven into the spring. The process is actually quicker than the traditional method of creating a steel spring and the result isn’t just a lighter spring, but a stronger one.

The first car to have them will be the 2012 Audi R8 e-tron, with mass adoption coming the following year.

There are already cars available with touchpads and Audi as well has their own however, Audi is working on a new touch pad which will decrease driver’s distraction and the new multitouch system that is going to arrive in the 2015 A8 will be similar to that found on smartphones and tablets that incorporates tactile feedback, and partnered with new head-up displays, voice controls and gestures, hopes to reduce driver distraction while increasing control.

Mercedes Benz has presented the same system a while ago displaying how it adapts to different type of road surfaces using laser and cameras to detect and adjust the suspension accordingly and Audi is working on a similar system but has also added a stereo camera mounted ahead of the rearview mirror, Audi plans to incorporate “photo-mixed detectors” (PMD) that rely on both radar and laser systems.